UNCSA is mourning the loss of Clyde M. Fowler Jr., the beloved head of the Visual Arts Program in the School of Design and Production for 30 years.

He joined the School of the Arts as director of the Visual Arts Program in the fall of 1975 and retired at the end of the 2004-05 school year, when he was named emeritus faculty.

“We are deeply saddened by the sudden loss of a member of our family,” said School of Design and Production Dean Michael J. Kelley. “Clyde Fowler affected so many lives and generations during his tenure at the school. His contributions will live on in every student that he taught. He was an amazing teacher, mentor, artist and friend, and he will be greatly missed.”

Founding School of Design and Production Dean John Sneden, who hired Fowler, said it was one of the best decisions he ever made. “He was a gifted young artist,” Sneden recounted. “I considered myself so lucky to have found him, as he proved to be a master teacher, caregiver and a dear friend with boundless love for all.

“Clyde was a marvelous mentor to thousands of students over the years, as well as a great collaborator with his peers. He loved the School of the Arts with all of his soul, and his clear vision, which he articulated so beautifully, helped guide us as we grew bigger and grew up. That, along with his art, will be his legacy,” Sneden added.

Tributes to and remembrances of Fowler have been pouring in. Alumni have described him as “brilliant,” “insightful,” “inspirational,” “talented” and “compassionate.” One said: “He taught me that drawing is about capturing the energy within the subject, not just about the outline that forms it.”

Like so many others, I can honestly say that Clyde changed the course of my life.

Fellow faculty and staff have called him “remarkable” and have written of their respect and gratitude for the man and his work. One wrote to him: “In good and bad times, you consistently provided leadership that challenged us to look at what was important and redefine what was needed. But your greatest gift was in the classroom and my daughters still carry your influence, especially your standards of excellence and honesty.”

The Visual Arts Program at UNCSA is an exploratory program designed for high school juniors and seniors who have an artistic interest, dedication and enthusiasm they wish to pursue in a rigorous, structured course of study in design, drawing, sculpture and art history. It is one of the most highly regarded visual arts programs in the country, preparing graduates to pursue their interest in fine art at universities such as Virginia Commonwealth, Kansas City Art Institute, Maryland Institute College of Art, Rhode Island School of Design, Ringling College of Art and Design, and many others. VA alumni have enjoyed successful careers in photography, graphic design, painting, animation, sculpture, installation art, makeup artistry and arts education.

A native of Burlington, Fowler graduated from Walter Williams High School there and earned a B.F.A. in communication art and design from Virginia Commonwealth University. He studied drawing at The Arts Students League and the National Academy of Fine Arts, both in New York. After graduation, he was an art instructor in the Alamance County Schools for several years before being picked to head the new Visual Arts Program at the School of the Arts.

During his time at the School of the Arts, he received an Award for Teaching Excellence in 1995, one of the many years that his students won recognition in the annual Scholastic Art Awards. He also taught in the school's Summer International Arts Program which was held in Rome and Florence. For six years he assisted in the supervision and planning of a Visual Artist Rockefeller Grant which supported lectures, exhibits and workshops on the UNCSA campus. Participating artists included Judy Chicago, Philip Pearlstein, Laurie Anderson, William Wegman, Audrey Flack and film director David Lynch. 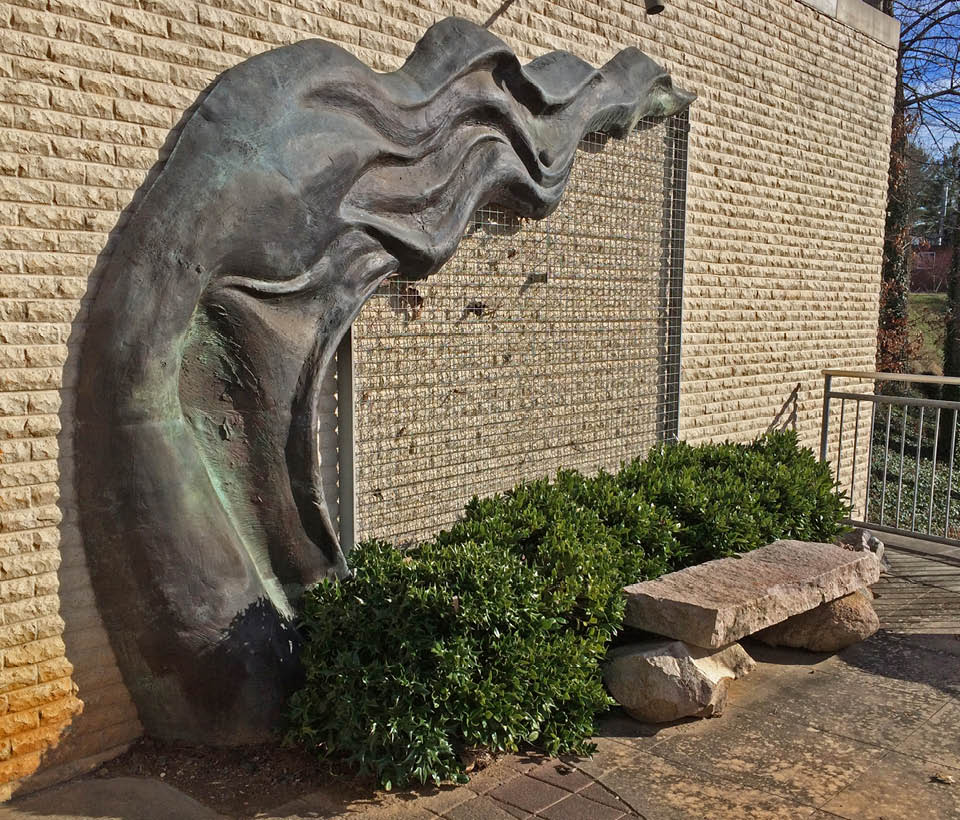 Overlook Terrace was a gift from Clyde Fowler, dedicated to the memory of his parents.

Upon his retirement from the School of the Arts, Fowler made a gift to the school in memory of his parents, Clyde and Catherine Fowler. The “Overlook Terrace,” designed by Lappas + Havener of Durham, is located on the east side of the School of Music Complex overlooking Daniels Plaza. It was completed in July 2005.

During his career, Fowler was included in the 40th Annual North Carolina Artists exhibition at the North Carolina Museum of Art. Other of his exhibitions include the Southeastern Center for Contemporary Art, Sawtooth Center for Visual Design, Wake Forest University, Weatherspoon Gallery at UNC-Greensboro, High Point Theater Gallery, Green Hill Center for N.C. Art, Lee Hansley Gallery, and Longview Gallery in Washington. Most recently, he and current VA Program Director Will Taylor shared an exhibition at Inter_Section Gallery on Trade Street.

In addition, he was chosen as a participant in the AICA Institute for Art Educators which brought 24 instructors from across the country to New York for a month. Studio space was provided in addition to attending scheduled seminars and informal discussion sessions addressing issues relating to arts education.

Fowler also designed scenery and costumes for several School of the Arts productions, as well as a piece for North Carolina Dance Theater. He also worked as a graphic designer for Cooper and Cockerham Agency in High Point.

Funeral services are tentatively scheduled for 3 p.m. Saturday, Feb. 6, at First Reformed United Church of Christ in Burlington. A private burial will follow.

In lieu of flowers, the family requests that memorials be made to The Clyde Fowler Endowed Scholarship for Visual Arts or The Clyde Fowler Endowed Scholarship for Design and Production at UNCSA (checks should be made to the UNCSA Foundation, indicating the scholarship name on the memo line), Office of Advancement, UNCSA, 1533 S. Main Street, Winston-Salem, NC 27127; or to the First Reformed United Church of Christ, 513 W. Front St., Burlington, NC 27215.

Online condolences may be made online at the Rich and Thompson Funeral and Cremation Service website or on the We Love You Clyde Facebook page.