Nine student films will be screened on Feb. 12

Film Dean Susan Ruskin, who curated the program, said choosing which films to screen is not easy. “These are among the best films that our students produced last year, but there are many others I would be proud to show,” she said. “The caliber of work is really quite remarkable.”

The upcoming screening is the second of two “best-of” programs initiated this year to increase audience exposure to the work that students produce throughout their four years of undergraduate study. The first screening was held in September.

“Our students are learning to tell stories,” Ruskin said. “For that they need an audience. These screenings are a win-win opportunity. The audience gets to see really good short films, and the students get to experience the audience reaction.”

The schedule begins with a fourth-year film, Folds, directed by Winston-Salem native Matthew Brown; written by Kazmo Kida, Chris Ellison and Jake Bellew; and produced by Ellison and Santiago Marcos. Brown, Kida, Ellison and Bellew graduated in 2015, and Marcos is currently a senior. Set in post-WWII America, Folds finds Hiroshi alone and disconnected until a chance meeting with his neighbor’s niece teaches them both to trust, let go, and conquer their circumstances. 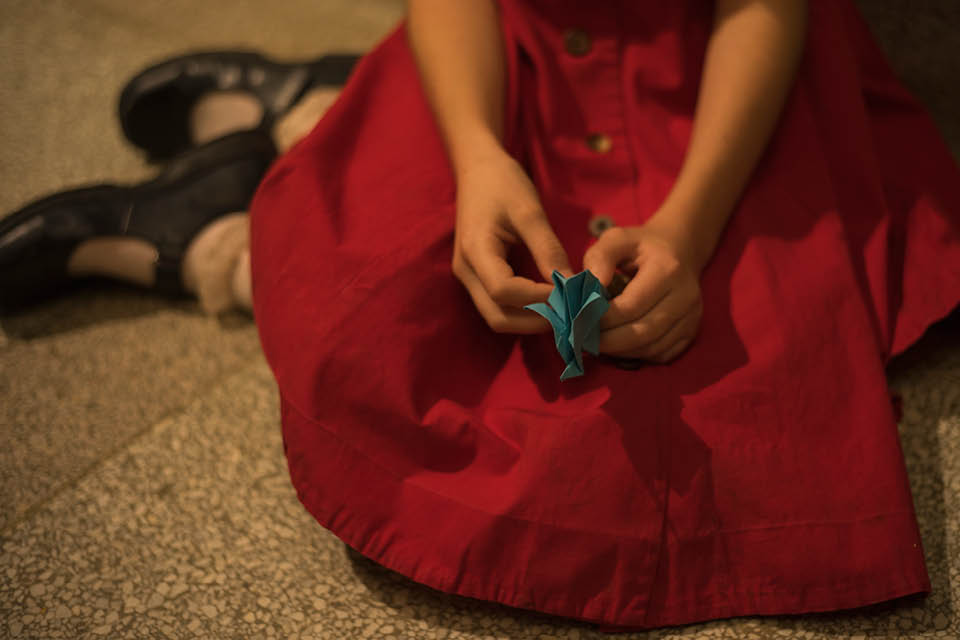 A still from “Folds.”

A third-year film, I Only Smile in Pictures, was directed by Clayton Witmer, written by Witmer and Chelsey Cummings, and produced by Michael Samilow. Set in a bleak distant future, the film depicts how the monotony of one man’s life is broken when he finds what genuine happiness can be.

Two animated films are on the program: Gothic Tale, directed by Marceia Patterson and animated by Patterson and Zing Grem; and Along the Stormfront, directed by Griffin Giersch, written by Giersch and Tanner Agle, produced by Agle, with animation by Agle, Giersch, Catherine Salisbury and Carinne Boord. Both are fourth-year films.

Gothic Tale is set in a gloomy castle, where a scientist, a vampire, and a giant fight over the possession of a beautiful flower. In Along the Stormfront, a bus ride into a town is plagued by mysterious disappearances, while a fox and an armadillo find themselves thrown into an encounter neither are prepared to face.

Additional films on the program include:

Petrichor, in which a young girl who suffers with depression struggles to overcome her self-loathing and find happiness within herself. Directed by Austin Abdo, written by Emily Morgan, and produced by Bri Catalano.

It's Alright, the story of a senior outcast in his small town high school who is on a journey to reunite with his estranged older brother. Directed by Stephanie Dowling, written by Alex Hughes and produced by Sara Newell and Deniese Lara.

Latch Baby, directed by Emery McGaha; written by Savannah Gisleson and Kevin Thanhauser; and produced by Tom Coradini. In this creepy tale, a single mom struggles to keep her son safe from the world outside, and her fears, inside their apartment.

Sandman, about an insomniac who begins to blur the line between nightmare and reality and must risk his life to discover the truth. Directed and written by Juan Camilo Herrera and produced by Rachel Hall.

Stuart Sleuth, directed by Edward Loupe; written by Loupe and Sean Rooney; and produced by Marty McCarthy. A young boy imagines himself a classic movie detective searching for his missing partner to help him cope with a loss.

The next screenings of student films will be at 7 p.m. Thursday, May 5 (this year’s third-year films) and at 4 p.m. and 8 p.m. Friday, May 6 (this year’s fourth-year films). End-of-the-year screenings will be in various locations in the ACE Exhibition Complex on the campus.