The opening night performance at 7:30 p.m. on Feb. 18 is a benefit for the Larry Leon Hamlin and Sylvia Sprinkle Hamlin / Urban League Endowed Scholarship, which supports talented artists of color in UNCSA’s School of Drama and School of Design and Production, through a partnership with the National Black Theatre Festival. 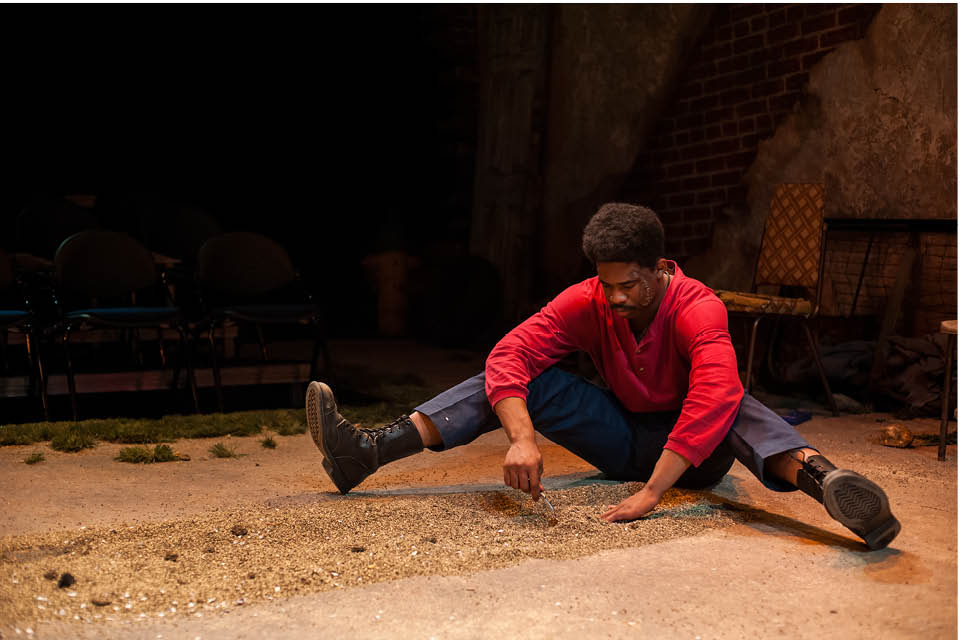 Wilson, considered one of the most significant playwrights of the 20th century, wrote a series of 10 plays, one set in each decade of the 20th century, chronicling American history from an African-American perspective. Most were set in his native Pittsburgh, so the collection became known as the Pittsburgh Cycle or the Century Cycle. He won two Pulitzer Prizes for Drama and a Tony Award, as well as numerous New York Drama Critics’ Circle and Drama Desk awards.

“Joe Turner’s Come and Gone” is set in a Pittsburgh boarding house in 1911 during the Great Migration, when descendants of slaves moved from the South to the industrial cities of the North, following the promise of good jobs and a better life. Seth and Bertha Holly, owners of the boarding house, create a shifting family of transients.

The UNCSA production is Guest Director Nicole A. Watson’s first experience at the school, and her first opportunity to direct a Wilson play, but she is no stranger to the Century Cycle.

Watson assisted Ruben-Santiago Hudson on his 2012 production of “The Piano Lesson” at Signature Theater in New York City. And in 2013, she worked on a radio version of the Century Cycle for WNYC in New York. “I worked with Ruben and other master artists on eight of the 10 plays for that project,” she said.

“August Wilson is one of my favorite playwrights,” Watson added. “Of all of Wilson’s plays, I think Joe Turner is my favorite,” she said, adding that its theme of finding one’s true self is timeless.

“The idea of figuring out one’s identity is always going to resonate,” she said.

In “Joe Turner’s Come and Gone,” two of Seth and Bertha’s boarders are Harold Loomis and his young daughter Zonia, who are traveling in search of Harold’s wife and Zonia’s mother. The unsettled and secretive Loomis sets Seth on edge, but Bertha and others look beneath the haunted man’s dark forbearance and bring to light his heartbreaking story. Loomis was kidnapped and forced to work for seven years on a chain gang by the legendary Joe Turner, a representational, but historically-based character. During Loomis’ illegal servitude, his wife, Martha, departs for the North, leaving Zonia behind with relatives.

Other characters include a “conjure” man, Bynum, who encourages the others to “find their songs”; Rutherford Selig, a peddler and “people finder” who descended from slave traders; and Mattie, Molly and Jeremy, a trio of 20-somethings whose varied journeys converge at the boarding house.

Watson said she identifies with each of the characters. “It's what I love about this play and perhaps all of August Wilson’s work. I think you can find something about each character to relate to. It differs every day, with every rehearsal. Different things stand out,” she said.

Actors from the School of Drama’s junior and senior classes will perform, with additional casting from the sophomore class.

“Joe Turner’s Come and Gone” premiered in 1984 at the Eugene O'Neill Theater Center in Waterford, Conn. In 1988 it ran for 105 performances on Broadway, with Angela Bassett in the cast.  It won the New York Drama Critics’ Circle Award for Best Play, and was nominated for a Tony Award and a Drama Desk Award for Best Play.

Nicole A. Watson is a freelance director with a focus on new plays and works that reimagine the past. Recent credits include The Fire This Time 10-minute play festival, “Twelfth Night” for Long Island University, and “The Mountaintop” for Kitchen Theatre Company. She directed the world premiere of Johnna Adams' “World Builders” at the Contemporary American Theater Festival and she was a 2015 artist in residence at the Drama League where she and playwright MJ Kaufman worked on their collaboration currently titled “We Sat in the Death House.”

Other credits include “Black Sheep” for Kitchen Theatre Company, DTUF @ HERE for Hollywood Fringe Exponential Festival, “We Play for the Gods” for The Women's Project, “Better Homes & Homelands” for The Drama League DirectorFest, “Mongo” for Working Theater, “Foreign Bodies for Women Center Stage, “born bad, Milk Like Sugar” and “Ti-Jean and His Brothers” for New York University Tisch School of the Arts, and the world premiere of the opera “Approaching Ali” for the Kennedy Center. She was the associate director on “The Great Society,” directed by Bill Rauch (Oregon Shakespeare Festival and Seattle Rep), and she works frequently with Ruben Santiago-Hudson, including as an associate producer on the August Wilson Century Cycle for WNYC and on “The Piano Lesson” for Signature Theater.

Watson is a frequent collaborator with The Fire This Time Festival, the Lark and the 52nd Street Project, where she has directed “A Midsummer Night's Dream” and “The Two Gentlemen of Verona” with the Teen Ensemble. She is a co-founder and curator of Working Theater’s annual Directors Salon, a member of the New Georges' Jam, a 2013 Drama League Fall Fellow, the 2011 recipient of the League of Professional Theatre Women’s Josephine Abady Award, and an alumna of both the Lincoln Center Directors Lab and the Women’s Project Directors Lab.

Upcoming projects include Katori Hall's “Our Lady of Kibeho” for Smith College.