Three world premieres and a repertory favorite are on the program for the Fall Dance Concert at the University of North Carolina School of the Arts, running Tuesday, Sept. 27, through Saturday, Oct. 1. Performances are at 7:30 p.m. Tuesday through Saturday, with a 2 p.m. matinee on Saturday, in Agnes de Mille Theatre on the UNCSA campus, 1533 South Main St. in Winston-Salem.

New faculty member Kira Blazek makes her UNCSA choreographic debut with her premiere of 18 Planets, symbolizing the cast of 18 dancers each as a microcosm and an essential part of the whole. 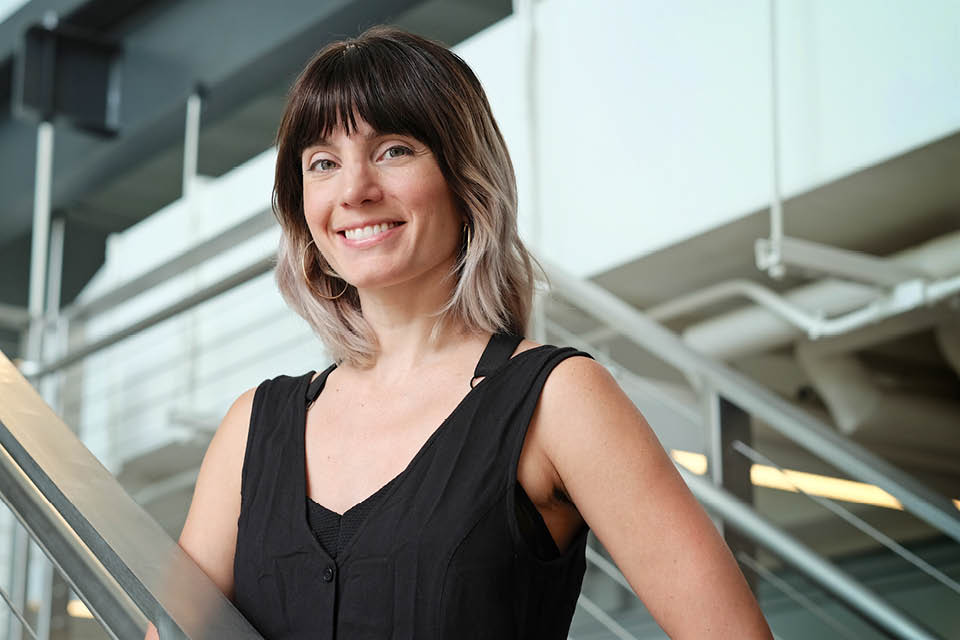 “This is my jumping off point, a structure to organize all the bodies,” said Blazek, a choreographer, performer and educator who danced with Shen Wei Dance Arts, Pilobolus and Hubbard Street 2. “The piece will have multiple scenarios happening at once, challenging dancers to be very aware of their duet or quartet, while navigating other dancers on stage.”

Blazek said 18 is “about the energy exchanged and shared between the dancers and the audience. Eighteen people moving can generate so much energy on stage, and I’m interested in scaling that in and out, finding moments of stillness within the whirlwind.”

With teaching experience at seven universities, Blazek is excited about the opportunities to both teach and create at UNCSA. “Training and creation can inform each other,” she said. “The process naturally accumulates meaning because of the risks and growth involved.”

The all-contemporary Fall Dance program also includes a premiere by alumna and veteran faculty member Trish Casey, in collaboration with percussionist John Beck of the School of Music faculty. Beck and his students will perform his original compositions live.

Creating work is a dynamic relationship with the unknown, living with questions and experimenting until, little by little, the answers become clear -- usually just in the nick of time.

Trish Casey, whose work "Tender Places and other stories" premieres at Fall Dance

Casey said her work, Tender Places and other stories, will be for a small group of dancers and will feature a solo female role. “I draw the material from living life and the journey we take, each step leading us to the next thing needed for growth,” she said.

“I remain intrigued and inspired (and a little bit frightened) by the mystery of the creative process,” Casey added. “It is a void to enter into, a kind of fishing in the dark, working and waiting and listening until something ‘speaks.’  Creating work is a dynamic relationship with the unknown, living with questions and experimenting until, little by little, the answers become clear -- usually just in the nick of time.”

The third premiere on the Fall Dance program is BITE by visiting artist B.J. Sullivan, distinguished dance faculty at the University of North Carolina-Greensboro. Sullivan said 18 dancers will perform to live music by West African drummer Sandy Blocker and his son Joe Blocker, who studies dance at UNCSA. Recorded music by Michael Brauer featuring Evelyn Glennie, and sounds created by the dancers’ performance, will contribute to the sound score.

“My composition is provoked conceptually on ideas of the refined versus less practiced/social, constructing and deconstructing, task-oriented patterns alongside the rehearsed organizational systems, innate and primal movement with more sophisticated and studied movement possibilities, connecting and a sense of belonging versus feeling alone and surviving, the ugly within beauty and vice versa,” Sullivan said.

While BITE is still in the creative process, Sullivan said her work generally considers all performance elements seen as part of the choreography. “It is a common practice for me to utilize stage hands, play with the space with curtains being moved during the dance, dancers in and out of the audience/spectator space, and visible interaction between the musicians and the dancers,” she said. 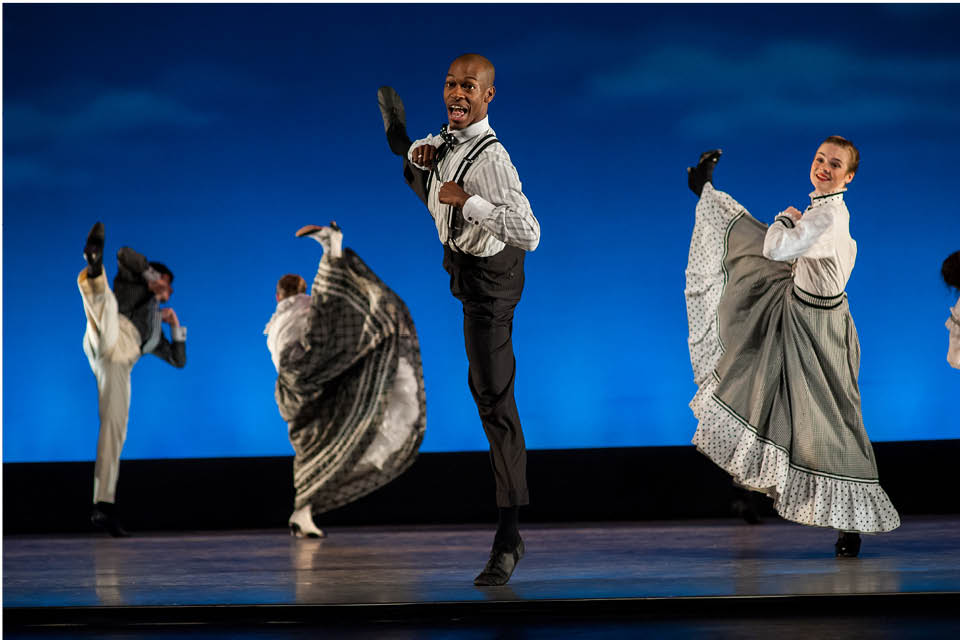 "Sunny Day" will be performed at Fall Dance.

Completing the program is a restaging of Charles Czarny’s popular Sunny Day, staged by faculty member and alumna Dayna Fox and set to Appalachian mountain music.

About Kira Blazek
Kira Blazek is an American performer, choreographer, and educator. In 2007, she began dancing for Hubbard Street 2 (HS2) in Chicago, performing works by choreographers such as Robert Battle, Edward Liang and Christian Spuck, and worked closely with choreographers Yarden Ronen, Julian Barnett, Janice Lancaster and Amy Raymond. After two seasons with HS2, she relocated to New York City, where she danced for Douglas Dunn & Dancers, becoming both rehearsal director and company manager. While in New York, she additionally danced for Christopher Williams, Sally Silvers, Bill Young, Pilobolus Creative Services, anoukvandijkdc (Netherlands), and Susan Marshall. Blazek danced for Shen Wei Dance Arts, performing Rite of Spring, Limited States, and Near the Terrace, as well as participating in the creation and performances of Undivided Divided. Blazek performed collaboratively under the direction of Ryan McNamara at the Whitney Museum and MoMA PS1. She also toured with Phantom Limb Company’s production of 69°South as both dancer and puppeteer.

In New York, Blazek began making her own work, starting with Transparent Disco Funeral presented by Dixon Place. She then premiered 7 Body Language Mistakes, again at Dixon Place, as part of the HOT! Festival, and Hunter’s Moon at Danspace St. Mark’s Church Food For Thought series. She created I AM NOT A CYLON for Ryan McNamara’s STILL exhibit in the Elizabeth Dee Gallery, and was featured in the music video for Beach House’s Lazuli. Douglas Dunn presented her work numerous times alongside other emerging choreographers in his historic loft space. He also included her in the Robert Rauschenberg Residency, where she created a trio with three large hand-drawn prints as backdrops. She has presented works regionally in Sarasota, Fla.; Oklahoma City and Tulsa, Okla.; and Austin, Texas. In Los Angeles, she created an installation performance for ASHES/ASHES Gallery, choreographed the music video for De Lux’s LA Threshold, and enjoyed various collaborations with Los Angeles artists in video and performance.

She holds a B.F.A. from Oklahoma University and an M.F.A. from California Institute of the Arts. Blazek is one of four Americans certified by Anouk van Dijk to teach Countertechnique. She guested with anoukvandijkdc in the New York premiere of SHOT, part of the New Island Festival. She studied periodically with her company in Amsterdam as well as taking the One Body/One Career Intensive in 2006 and 2009. In 2012, Blazek became certified, and has taught workshops around the country, including classes for professional companies such as Sarasota Contemporary Dance, Diavolo, and BODYTRAFFIC.

About Trish Casey
The recipient of two UNCSA Teaching Excellence Awards (1997, 2005) and a University of North Carolina Board of Governors Award for Teaching Excellence (2005), Trish Casey has taught contemporary dance at UNCSA since 1989. UNCSA premieres of her choreography include Blue Moon, Grove, and Surrendering in a Champion’s World, which was made into an award-winning dance film which she co-directed in collaboration with the UNCSA School of Filmmaking.

Casey danced with the companies of Pauline Koner, Don Redlich and Marcia Plevin. Additional teaching credits include Victorian College of the Arts in Melbourne, Australia; University of Southern Mississippi; and Southern Methodist University. She directed creativity-based workshops for dance educators, choreographers and professional dancers in New Mexico, Texas and North Carolina. Special projects include A Dance Gathering in Dallas, Texas, which continues to serve as an annual event hosting professionals’ work from around the country, as well as Thinking, Making, Doing Together, a choreographic intensive for dance artists in collaboration with members of the Bill T./Arnie Zane Dance Company.

Prior areas of concentrated study include Body Mind Centering with Bonnie Bainbridge Cohen, ideokinesis with the late Andre Bernard, and Iyengar Yoga. Casey has been mentored in neuromuscular re-education/functional anatomy by Irene Dowd and is curently a Healing Touch apprentice working toward certification.

Casey has a B.F.A. from the UNCSA School of Dance and an M.F.A. from Tisch School of the Arts at New York University.

About B.J. Sullivan
B.J. Sullivan is a choreographer and performer active in the development of post modern dance technique. As a tenured associate professor at the University of North Carolina Greensboro, her research is in choreography and her applied technique. Gaining recognition for the teaching methods of her own style and floor work, Sullivan coined this body of material "Safety Release Technique (SRT).” She has traveled extensively teaching SRT at many universities and professional schools at home and abroad including American Dance Festival and UNCSA in North Carolina; Dance New Amsterdam and New York State Summer School of the Arts in New York; The Professional School in Thessaloniki, Greece; and Concepts in Motion in Bermuda; Interlochen Arts Academy in Michigan, among many others.

Described as unique, fluid, and physical, Sullivan strives for her dances to go beyond the sentimental and the romantic, offering the audience a total and real kinesthetic experience. She has been selected as a choreographer for The Yard on Martha's Vineyard three times. In 1999 she was invited to present a concert of her work to benefit that organization. In 2002, she was honored with a Choreographer's Fellowship from the North Carolina Arts Council. Her work has been showcased at the North Carolina Dance Festival; Independent Dance Makers in Durham; the University of North Carolina School of the Arts; DNA Gene Pool Series, the Dance Gallery Festival, The Isadora Project with solo artist Christine Jowers, and Urban Wash Dance Company, all in New York City; Chelonia Dance Ensemble in Beloit, Wisc.; Counter Groove Dance Company in Detroit; Concepts In Motion in Bermuda; and the Professional School Dance Ensemble in Thessaloniki, Greece.

Sullivan has a B.F.A. from The Juilliard School and an M.F.A. from the University of Illinois Urbana-Champaign. She performed in the companies of Sue Bernhard, Lorn MacDougal and Michael Mao, and also in the works of Gerri Houlihan, Colin Connor, Rebecca Nettl-Fiol, Joe Goode, Stanley Love, Renee Wadleigh, and Bill Young.

About Dayna Fox
A native of Columbus, Ohio, Dayna Fox received her early dance training at Ballet Met. She also has studied in New York and at the University of North Carolina School of the Arts under such illustrious teachers as the late Melissa Hayden, Duncan Noble, Mimi Paul, and David Howard.

In 1977, Fox joined the North Carolina Dance Theater, where she was a featured dancer through 1985.  Under the direction of Robert Lindgren and Salvatore Aiello, NCDT performed extensively throughout the United States, Canada, and Europe including appearances at The Kennedy Center, Brooklyn Academy of Music, the American Dance Festival, the Spoleto Festival in Charleston, and the Festival of Two Worlds in Spoleto, Italy.

In 1989, she was appointed director of the UNCSA’s Preparatory Dance Program, an after-school pre-professional training program, which prepares third- through eighth-grade students for potential admission to the School of Dance. During her 25 years as director, Fox trained hundreds of students for the school’s high school program, many of whom have gone on to illustrious careers in professional companies across the United States and abroad.

Fox currently serves on the ballet faculty for the UNCSA School of Dance and holds a B.F.A. in Dance from UNCSA.