Mary Mattison Vallery (L) and Chessa Metz (R) star as the Hilton sisters in "Side Show." / Photo: Neil Soffer
Home > News & Features > 5 Questions with the stars of “Side Show”

5 Questions with the stars of “Side Show”

Circus performers bring the big top to UNCSA in this fall’s production of Side Show, which is based on the true story of Violet and Daisy Hilton—conjoined twin sisters who become Vaudeville singing sensations. Fourth-year Drama students Chessa Metz and Mary Mattison Vallery stepped into the challenging lead roles.

1. What is the greatest challenge in portraying conjoined twins?

Following our own physical impulses requires a huge sensitivity to each other. You have to be ready for anything! The real twins didn't have to worry about separating; we, of course, have to be careful. Over the course of the rehearsal process, this has become instinctual and subconscious, as I'm sure it was for the real Hiltons. Some movements remain challenging, especially standing up off the floor and walking down the spiral staircase. We are a team! – C.M.

Staging! Learning how to synchronize our every move and trying not to upstage one another was a difficult process. It can also be difficult to hear the band when we’re singing in one another’s face. – M.M.V.

2. How did the two of you prepare for your Side Show roles together?

We watched a documentary about the Hilton sisters and two movies they starred in. Watching footage of the twins performing and navigating everyday life together was extremely helpful. We both prepared the music separately over the summer. Most of the work building our relationship happened during the 6 hours we were magneted together every day for rehearsal. – C.M.

Chessa and I learned to move about without our magnets so that we wouldn’t rely on them. We practiced going up and down staircases, dancing together and singing right next to each other. – M.M.V. 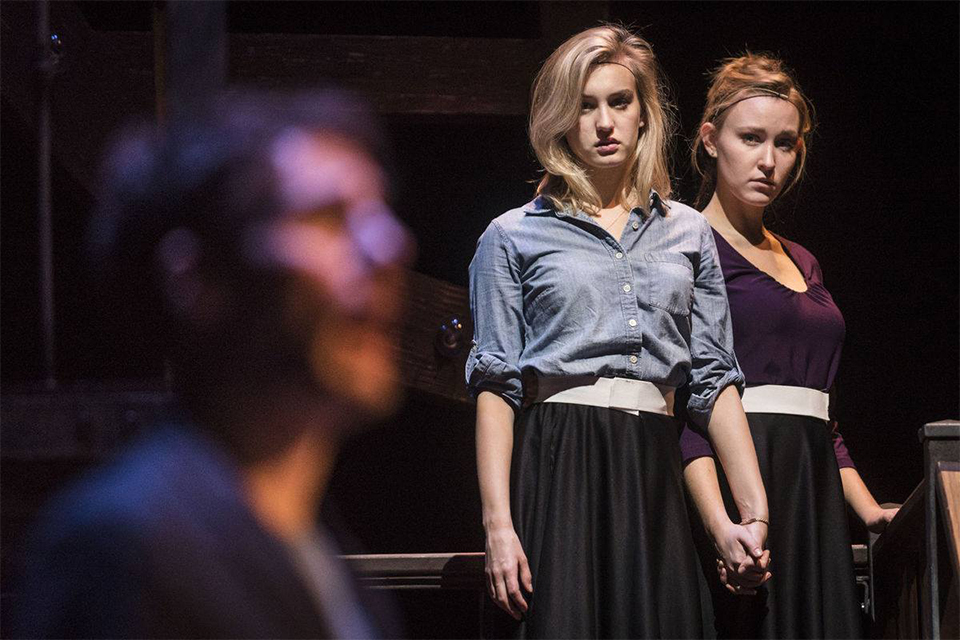 Mary Mattison (L) and Chessa (R) rehearse for "Side Show."

3. What has been the most fun part of working on Side Show?

Being stuck to Mary Mattison. She's the sister I never had! She's been a dream to work with and an inspiration to me in so many ways. – C.M.

4. What’s your favorite musical number in Side Show?

“Leave Me Alone.” Arguing with someone who is attached to you is loads of fun as an actor. – C.M.

“I Will Never Leave You.” It is the moment that the twins find love and acceptance, and I believe the Hilton sisters shared a moment like this in their lives. – M.M.V.

5. What are your post-grad plans?

After school I plan to move to New York and begin auditioning! – M.M.V.