"Side Show," a musical based on the true story of conjoined twins who became Vaudeville singing sensations, presented unique challenges for student designers at the University of North Carolina School of the Arts.

Performed by juniors and seniors in the School of Drama, "Side Show" will be presented for seven shows beginning Tuesday, Nov. 15, and running through Sunday, Nov. 20, in Freedman Theatre of the Alex Ewing Performance Place on the campus at 1533 South Main St. Tickets are $22 regular and $18 student with valid ID and are available at online or by calling the box office at 336-721-1945.

“This probably takes the cake for the most unusual design I’ve had to do,” said Kat Patterson, a graduate costume designer in the School of Design and Production. “The only other project that competes is making a life-size camel puppet for a production in undergrad. Creating a functioning three-legged man and an armless woman beats that for sure.”

Erin Bullock, a senior wig and makeup designer, had a little more experience with bizarre designs. “My junior year at UNCSA I was assistant designer to a film called Project A where we designed a seven-foot-tall telepathic, killer alien army that was inspired by a mashup of praying mantises, cuttlefish, beetles and glowing jellyfish,” she said. “That was definitely a unique experience.” 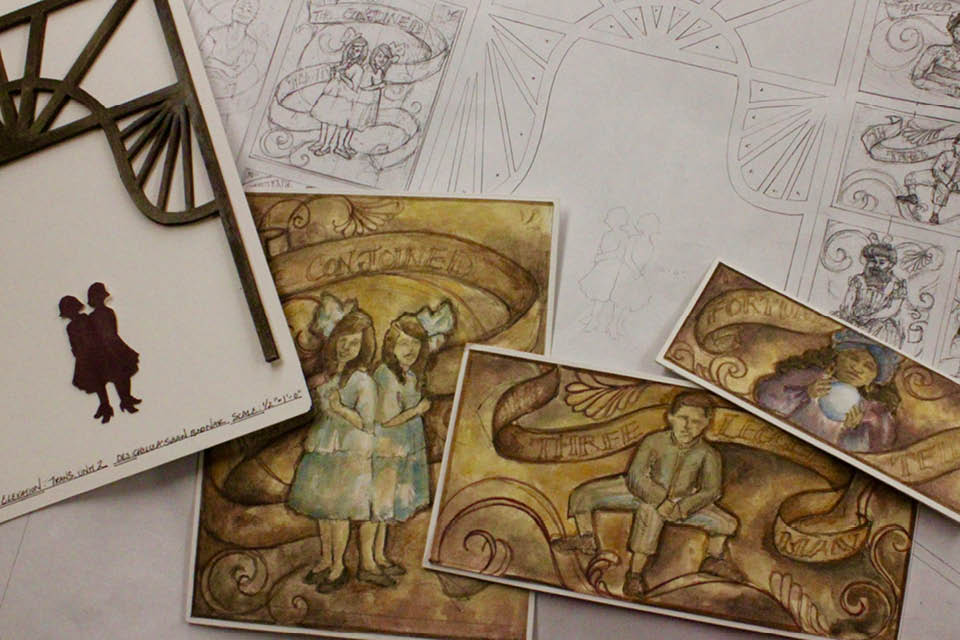 Scenic Designer Chelsea Bednar said while every play is unusual in her craft, "Side Show" presented its own challenges. “Considering the stereotypical ‘freak show,’ 'Side Show' has something deeply relatable and human at its core,” said the senior, who is an alumna of UNCSA’s high school Visual Arts Program. “This is where the conceptualism for the set began, depicting the atmosphere of the world in a minimal but universal way.”

With music by Henry Kreiger and book and lyrics by Bill Russell, "Side Show" explores the lives of Daisy and Violet Hilton, twins who were born joined at the hip. Abandoned by their mother and sold by their aunt to the owner of a traveling show, they were exploited as features of a “freak show,” along with a three-legged man, an armless woman, a lizard man,  a bearded lady and a half-man, half-woman. Struggling to find identity in a life they were forced to share, Violet and Daisy eventually became Vaudeville stars.

All of these freak show attractions really existed. Some attractions were birth deformations and some were purely spectacle.

For UNCSA’s musical, the designers focused their research on real people and real freak shows from the 1930s. Bednar read up on side shows and watched documentaries about the Hilton sisters, and then did what she calls “emotional research – artwork pieces, anything non-historical that represented the mood of what the play emitted.”

Research for the wig and makeup design focused on actual people who traveled with freak shows. “All of these freak show attractions really existed,” Bullock said. “Some attractions were birth deformations and some were purely spectacle. People who played the role of Lizard Man, also known throughout history as Elephant Girl or Crocodile Man, typically had the skin condition called ichthyosis which gave them the appearance of large scales.”

Designing a Lizard Man who could change into a lawyer in under a minute really ups the engineering challenges.

Patterson studied the actual costumes worn by freak show attractions. “Francesco A. Lentini was the famous three-legged man and Josephine Joseph was a famous Half Man Half Woman,” she said. “I looked at the costumes these performers chose to wear because it was really good insight on how best to highlight such unusual physical conditions,” she said.

The biggest challenge of designing costumes for "Side Show" was the number of costume changes, Patterson said. “The cast members played anywhere from two to seven different roles which meant the costumes had to be able to transition and change quickly. Designing a Lizard Man who could change into a lawyer in under a minute really ups the engineering challenges.”

The wig and makeup designers faced similar challenges. “Many of the freaks will be in and out of different characters throughout the show,” Bullock said. “Dog Boy, Lizard Man, Three-Legged Man and Human Pin Cushion have to be cleverly crafted to handle these crazy changes, allowing our build crew to explore materials and processes we wouldn’t normally have: for example, utilizing full-faced masks already prepped with the necessary wig, facial hair and texture.”

"Side Show" had its Broadway premiere in 1997 and ran for 31 previews and 91 performances. The 2014 heavily-revised Broadway revival ran for 21 previews and 56 performances. Director Robert Francesconi, assistant dean of the School of Drama, says the UNCSA production will follow the newer version, which featured additional musical numbers and a deeper exploration into the characters and their challenges.

“From the first day we met to discuss the show, Bob and I have been on the same wavelength in how we wanted to tell the story which carried through into the design and conceptualism of the set,” Bednar said.

More than anything, I personally wanted to capture the ambiance and subtle spectacle of the places the show takes its audience.

“More than anything, I personally wanted to capture the ambiance and subtle spectacle of the places the show takes its audience,” she added. “The idea was to make the most out of how simplicity can transform into different spaces, while maintaining an overall aesthetic unity within the design.”

Though both Broadway productions of "Side Show" were short-lived, the student designers predict the UNCSA production will be a hit with local audiences.

“What makes 'Side Show' unique to me is how it really explores a lot of different forms of entertainment within the story itself,” Patterson said. “It’s a musical that not only features a freak show, but also transports us to a Vaudeville stage and ends in a movie set.

“It is not only an exploration a two sisters’ lives but also of how the face of entertainment has evolved,” she added.

Bullock said local audiences will love the fantastical elements of a classic freak show happening right before their eyes. “Between the big top set, the gorgeous costumes, the special effects that will alter your sense of reality and the characters brought to life with vocals that will send chills up your spine, 'Side Show' transports audiences out of Winston-Salem and into the 1930s freak show.”