A ‘dark day’ on Broadway refers to one day each week when a show will halt performances, giving cast and crew members the opportunity to rest and reset. Tony-nominated actor Brandon Victor Dixon recently traveled from New York City to spend a Monday visiting with drama students at UNCSA. What show was dark that day?

Hamilton: An American Musical. Maybe you’ve heard of it? 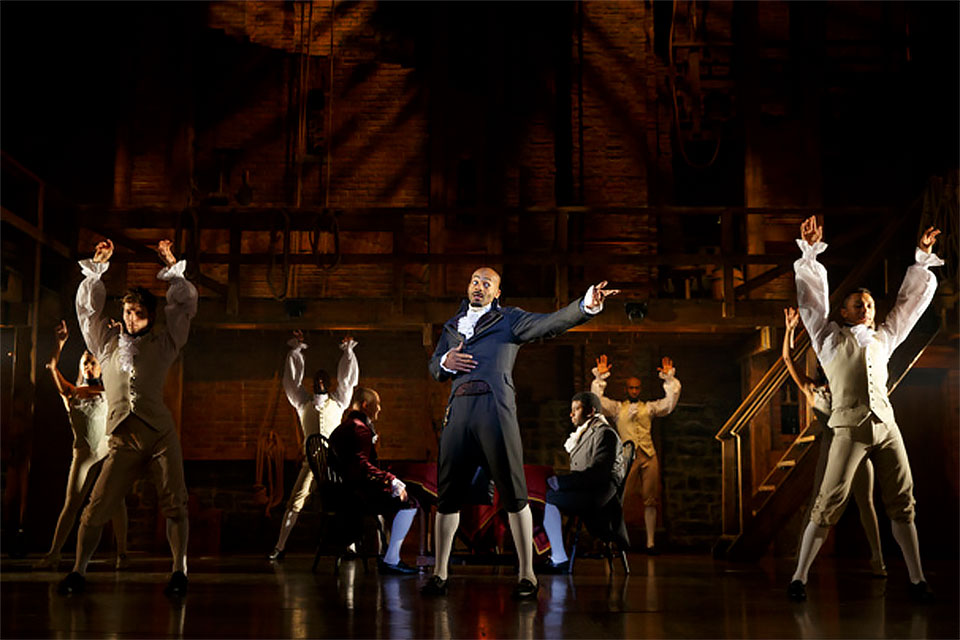 Dixon, who has portrayed a wide range of characters on Broadway, off-Broadway and on London’s West End, is currently starring in Hamilton in the principal role of Aaron Burr. He is longtime friends with Krisha Marcano, who teaches musical theatre dance in the School of Drama. Appearing together in the original production of The Color Purple on Broadway, they went on to work together in Motown the Musical on Broadway in 2013.

“Bringing guest artists to UNCSA keeps my students ‘in the know’ on what is going on in the industry and how the industry may or may not be changing,” Marcano said. ”Guest artists bring a human-ness to the way students view successful professional artists… listening to their stories of success, failure, hard work and being prepared. It reassures them that it is a process, it is possible and that training is essential.”

Dixon and Marcano hosted two Q&A sessions with students during his visit, where he shared advice for building a fulfilling career as an actor—from the best “survival jobs” to understanding the importance of storytelling in every role.

“I walk into the [audition] room with the knowledge that I am more than enough,” Dixon said. There’s no need to fear the process, when a connection is really what you should be seeking.

Though he hasn’t been cast in every role he’s auditioned for, Dixon was able to effectively leverage connections and resources available to him when he co-founded WalkRunFly Productions in 2013. With his co-founder Warren Adams, Dixon produced the 2014 Tony Award-winning revival of Hedwig and the Angry Inch, featuring Neil Patrick Harris.

When asked about positivity and keeping an upbeat attitude, Dixon pointed to his spirituality. “We each have the potential of the entire universe,” he said. Meditation—encouraged by a chance encounter with beloved actress Phylicia Rashad—has helped him to stay focused, realize his potential and seize opportunities to create a space for his work. Staying active also helps him to keep a physical connection with his work.

“You have to change the picture so that people can see you,” said Dixon of overcoming obstacles and finding success in available opportunities.

You have to change the picture so that people can see you.

Hamilton has been the perfect display of opportunity, he added. “What Hamilton is doing is giving wonderful material to actors who now have the opportunity to show their work… it opens doors and creates opportunities for so many.”

Finding the right representation is also important when it comes to opportunity.

“Look for someone who is excited by you… who works for you,” Dixon, who has worked with the same manager for nearly his entire career, advised.

Dixon, who landed his first major role as Adult Simba in the national tour of The Lion King during his senior year at Columbia University is quick to admit that his experience finding success so early in his career is uncommon.

“There’s time enough to go big, try something new, be overwhelmed and change yourself,” he said. Begin by building skills and honing those skills. Over time, you’ll increase your probability of being cast in the roles you want.

What do you do while you’re building your skills? A job that allows for a robust audition schedule is a must. Jobs with evening hours allow greater audition time during the day. Dixon recommended the food and beverage industry (he was once a bartender) or refereeing for intramural sports teams.

Dixon, who is a two-time Tony Award Nominee (for his roles as Harpo in The Color Purple and Eubie Blake in Shuffle Along), warned that awards aren’t everything. Learning how to tell your story is the most fulfilling aspect of being an artist.

“Take a risk… what’s the story you want to tell, and what’s the best medium to tell it?”