Summer is a time to soak up the sun … or the stars, if you’re Thatcher Johnson-Welden, a rising second-year Filmmaking student. Johnson-Welden interned at Cannes Film Festival in May with Princ Films, an international distribution company.

Between filmmakers pitching their movies, nightly red carpet events and a whirlwind of networking, she managed to pick up a few tricks of the trade and possibly even a new career path: film distribution.

Here’s what she had to say about her summer days at one of the most prestigious film festivals in the world:

Tell us about your experience at Cannes. What was a typical day like for you?

I was an intern for The American Pavilion at the Cannes Film Festival in France. I was assigned to work with Princ Films, an international distribution company that is based in the United States. Each day I would report to our booth in the Marché and schedule that day’s meetings. My primary job was to organize the schedules of the two executives with whom I was working. I had to decide whom they should and should not take meetings with. This led to a lot of people pitching their films to me so that I could decide if the film deserved a meeting.

I learned a lot about pitching and the importance of professionalism. I received more compliments and party invites from people trying to convince me to schedule a meeting than I have at any other time in my life. The most important advice that my boss gave me was, “If someone will not leave you alone, just beat them at their own game. Eventually, they will leave you alone, and it’s fun to watch them realize what you are doing.” 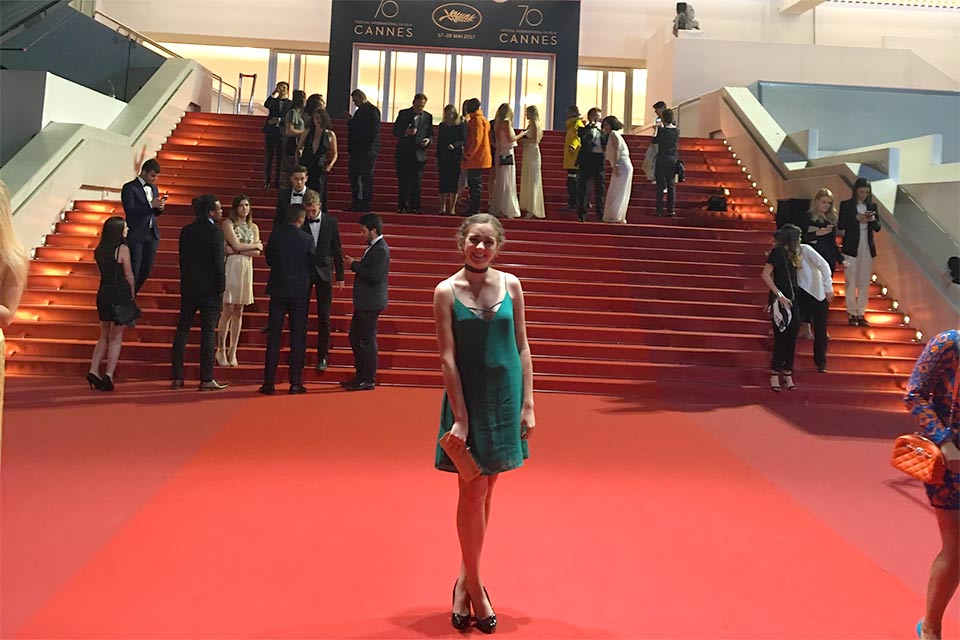 Johnson-Welden on the red carpet at Cannes.

Each day after work, I would go back to The American Pavilion for dinner and then head to my apartment to change into an evening gown for that night’s premiere. Most days, I was able to attend a red carpet showing at The Lumière Theatre, then we would either head to a yacht party, karaoke bar or try to track down the celebrities.

How did you find this opportunity?

I found out about this opportunity from some upperclassmen who attended Cannes last year. A film that I acted in had its premiere at Cannes a few years ago, and I have been itching to attend the festival as a filmmaker since. Naturally, when I heard about this opportunity, I knew that I had to take it.

Share a special or favorite moment from your experience.

My favorite moment was towards the end of the trip when my boss offered me a job working with his company at the next film festival they are going to attend!

What was one thing that surprised you about your experience?

Everyone wanted to be as helpful as possible ... even in a competitive environment, filmmakers stick together and they really do want each other to succeed.

The thing that surprised me the most was how willing to help everyone was. I was able to go up to filmmakers and talk to them without feeling like they just wanted to walk away. Everyone wanted to be as helpful as possible. This showed me that even in a competitive environment, filmmakers stick together and they really do want each other to succeed.

How did your work at Cannes relate to your future career goals?

I was able to talk one-on-one with directors, producers and actors about their paths to success. Thanks to this experience, there are studio executives who know my name and have my business card. This isn’t like other opportunities where they throw the business cards away and forget your name. Days after meeting them, they would remember my name and tell me to let them know if I ever need a referral for an internship. 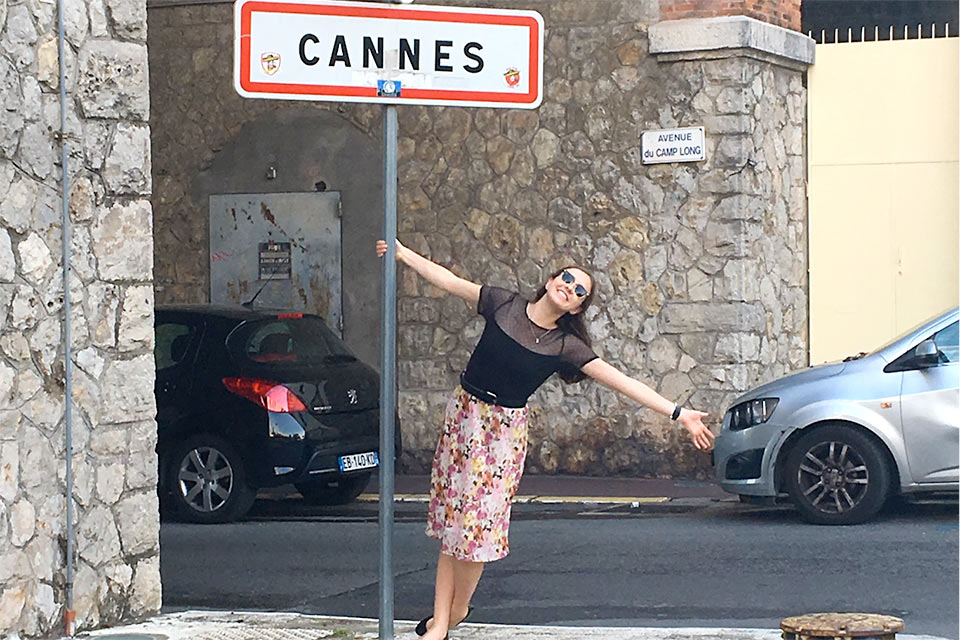 How did your work at Cannes complement what you are doing at UNCSA?

At school, we learn about how to manage controlled situations. At the end of the day, if something goes wrong, we have a team of people to help us fix it and learn from it. In the real world, this team doesn’t always exist. I was fascinated by seeing my boss handle situations with ease the way that I hope to. He knew when people were bluffing and was able to call them out on it. I learned so much just by listening to meetings the same way that I learn from upperclassmen at school.

If you had to describe your experience at Cannes in one word, what would it be?

Eye-opening. That is kind of two words, but I think it counts. Before this trip, I was convinced that I wanted to spend the rest of my life on set making movies. Now that I have been exposed to it, I think that I might want to work in film distribution.