Heralded costume designer Paul Tazewell told the Class of 2018 at the University of North Carolina School of the Arts (UNCSA) to embrace their role as pioneers. Tazewell, a 1986 graduate of the School of Design and Production who won a Tony Award in 2016 for the costumes he designed for the Broadway smash “Hamilton,” spoke Saturday to the largest graduating class in the history of UNCSA.

Tazewell encouraged the 266 graduates to heed the words of author Deepak Chopra: “Every time you are tempted to react in the same old way, ask if you want to be a prisoner of the past or a pioneer of the future.” 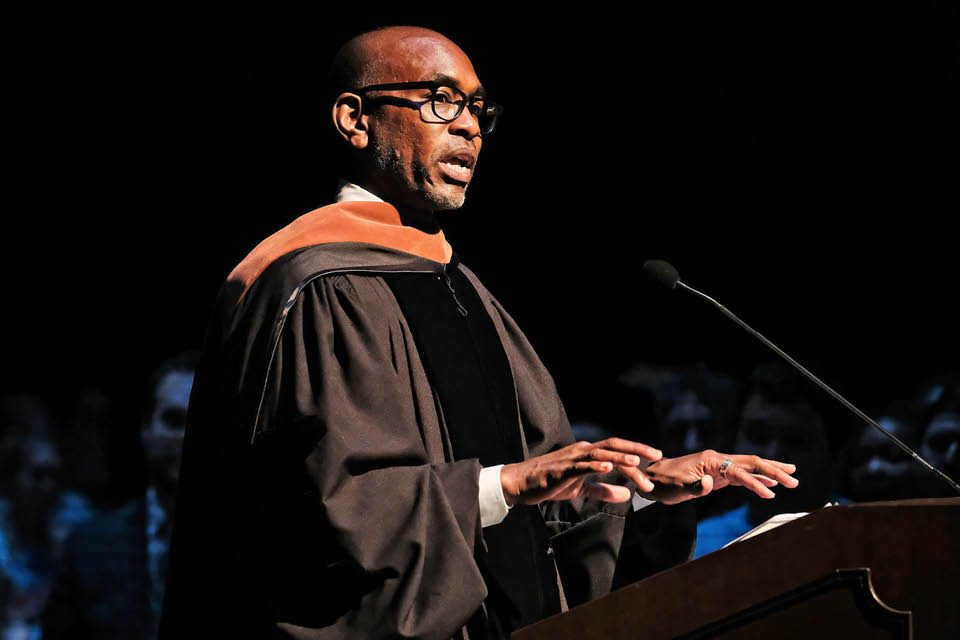 Working on “Hamilton,” Tazewell said, is the highlight of his 27 years as a costume designer. The groundbreaking musical was created by Lin-Manuel Miranda with a process of fluid and generous collaboration. “That process was a close to perfection as I may ever come as a costume designer,” he said.

Both Miranda and the show itself are pioneers, Tazewell said. “While Hamilton may lovingly reference musicals of the past, it is anything but a prisoner to the past,” he said, adding that Miranda’s “passion to tell a universal story in a whole new way spread to each and every one involved in the creation.”

Tazewell’s career has included costume design for Broadway, Off-Broadway, opera, dance, television and film. In 2016, the same year he won a Tony for “Hamilton,” he picked up an Emmy Award for NBC’s “The Wiz Live!” This year his designs for NBC’s “Jesus Christ Superstar” took social media by storm.

“The superb singing and dancing notwithstanding, it was the costumes that took center stage of this historic show,” Chancellor Lindsay Bierman said in his introduction of Tazewell on Saturday before a full house in the Stevens Center. “From ‘Bring in ’Da Noise, Bring in ’Da Funk’ – the start of his Broadway career in 1995 and his first big break – to his newest Broadway shows, ‘The Donna Summer Musical’ and Jimmy Buffett’s ‘Escape to Margaritaville,’ Paul has had an amazing career that just keeps getting hotter and hotter.” 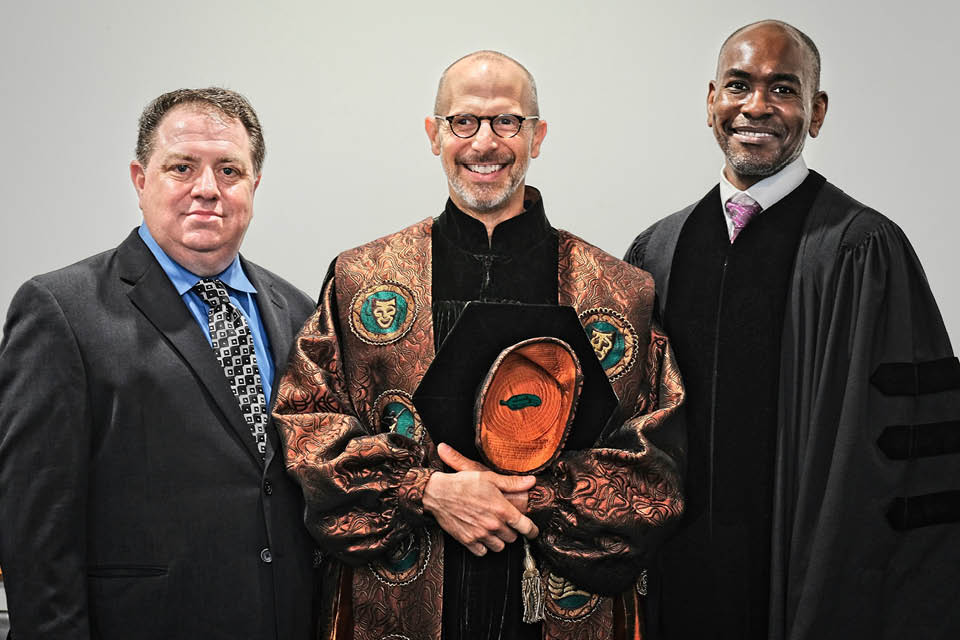 But it wasn’t the career that Tazewell dreamt of as an “overweight, asthmatic black boy in what was a predominately white neighborhood -- but quickly changing -- in Ohio.”

The son of a research chemist and a French and English teacher, he was well cared for, but not popular on the playground. “It was not the easiest place to build my self-esteem,” he said. “I always felt that I wasn’t good enough. I had to try twice as hard as the other kids.”

The boy who “loved to play dress up, loved a good wig made of curled paper and tape, and loved a good headdress,” discovered theater through his love for puppetry. His mother taught him how to sew, and he interned in the costume shop of the Akron University theater department while he was in high school. Upon graduation, Tazewell enrolled in the Pratt Institute in Brooklyn to major in fashion design, but after a year he transferred to UNCSA, with dreams of designing costumes for classical theater and opera.

“I was thankful to be in a place where it was okay to be chunky or quirky or even audacious,” he said. “UNCSA was a haven where the color of my skin was the last thing on people’s minds.”

So he was disarmed when guest artist Ann Roth (who is still designing at age 88 and is nominated for three Tonys this year) flipped through his portfolio and told him he had a great chance to succeed but needed to study modern urban street clothes because those characters and those stories would inhabit the next great wave of theater, television and film.

“My race would indeed influence the entire path of my career,” he said. Along that path, he has collected five additional Tony nominations, has received four Helen Hayes Awards, two Lucille Lortel Awards and the highly coveted Princess Grace Statue Award.

“Earlier in my career, I resented being labeled a black designer because it motivated people to hire me for only black shows or black versions of classics,” Tazewell said. “I felt people kept boxing me in. Ann Roth’s words and my stubborn reaction to them rang in my ears.

Whatever you do, do not resent your differences. Ever. Instead embrace them. Empower them to inspire you to create change.

“I felt I was being kept in a place that wouldn’t allow me to design in the ways I had hoped for. I felt artistically stifled,” he added. “In actuality I was grateful for the work. I was able to support myself and start to make a name for myself. I was being given my shot.”

That shot was “Bring in ‘Da Noise, Bring in ‘Da Funk,” and though it was an African-American show, Tazewell knew it was his chance.  “It was Broadway. Finally. My tireless work ethic and drive to succeed was paying off,” he said.

Like “Hamilton” 20 years later, “Bring in ‘Da Noise” was a game changer for Tazewell and for musical theater. “It remodeled the shape of the American musical in the way it used music, structure and mind-blowing tap choreography,” he recalled.

“There I was working on a show that used tap dance and bucket drums from the New York subway to speak of the African-American experience all the way from slavery to the present. And yes it indeed meant designing urban street clothes. Lord have mercy.”

But it also gave him the opportunity to design a century’s worth of period costumes.

Critics went wild, heralding the show as a revolutionary piece of theater that moved the genre forward and raised the bar for new musicals.

“For the first time I saw the possibility that the color of my skin might be an asset and not a hindrance,” Tazewell said. “I began to believe in myself and acknowledge that my vision was original.”

Hoping to inspire future artists of color to follow their dreams, Tazewell has established a scholarship for the UNCSA School of Design and Production’s undergraduates, who he said will become the next generation of creative innovators. The inaugural Paul Tazewell Scholarship will be awarded fall 2018.

Tazewell said the entertainment industry is challenging for women, members of the LGBTQ community, and people of color. “Trust me,” he said. “Whatever you do, do not resent your differences. Ever. Instead embrace them. Empower them to inspire you to create change.”

He told the graduates he is awed by the possibilities ahead of them. “When I started in my career, we had no cell phones, no Internet, no search engines. We barely had a fax machine. “But somehow we made it work,” he said.

In you, I see a generation that has the passion and fortitude to rise up against violence and ignorance and stagnant politics and rally hundreds of thousands of people to march as one. You defy victimhood and are without a doubt pioneers in your roles and your belief in humanity.

“In you, I see a generation that has the passion and fortitude to rise up against violence and ignorance and stagnant politics and rally hundreds of thousands of people to march as one,” he said. “You defy victimhood and are without a doubt pioneers in your roles and your belief in humanity.

He urged graduates to never forget the power of the arts to create social change. “The arts have the power to defeat bigotry, the power to extinguish hatred, the power to even end dictatorship disguised as the face of democracy.”

He told graduates they have chosen a discipline that has the power to change the hearts of the most close-minded and the minds of those people who believe they know it all.

“We – you – hold the power to uplift and change lives. Your time here has given you the tools and the expertise to become forward-thinking artists. It is incumbent upon you to share your talent and use your artistic voice to create change in this world,” he said.

“This is a chance for all of you to be pioneers,” Tazewell added. “May you hold this responsibility close your hearts and may you never stop moving forward.”

During the university’s 52nd Commencement on Saturday, Tazewell was awarded an honorary Doctor of Fine Arts. A recording of the live-streamed ceremony is available online.