The Thomas S. Kenan Institute for the Arts at University of North Carolina School of the Arts will welcome 2018 Kenan Arts Research Fellow Kendal Henry for a residency in Winston-Salem October 3-9.

Henry—a New York City-based public artist, curator and director of the New York City Department of Cultural Affairs Percent for Art Program—believes that public art can be used as a tool for social engagement, civic pride and economic development. During his Winston-Salem residency, he will work with members of the community to create a public art installation in south Winston-Salem near the UNCSA campus. 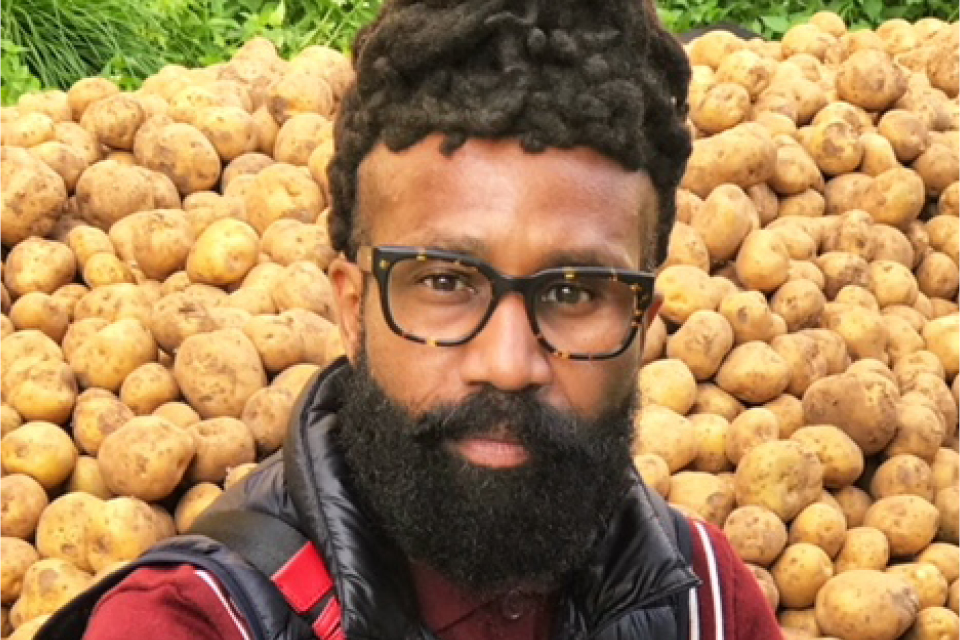 The public is invited to learn more about Henry’s residency and creative process during an evening of food, fellowship and conversation on Thursday, Oct. 4, at the historic St. Philips African Moravian Church, 900 South Church St. in Old Salem. The program will begin at 6 p.m. with a reception to follow. The event is free, but seating is limited and reservations are required via Eventbrite. A free shuttle will depart from the Happy Hill Willows Peake office, 840 Pitts St., at 5:15 and the UNCSA Library Plaza, 1533 South Main St., at 5:40 p.m. Shuttles will return from St. Philips following the event.

“Public art is about so much more than sculpture,” said Kenan Institute Executive Director Corey Madden. “It is about creating dynamic experiences with art in the urban environment. I am thrilled to bring Kendal Henry, a remarkable artist who works spontaneously with communities to make transformative experiences, to Winston-Salem to share his work and process.”

Henry’s creative process is deeply collaborative, and he invites individuals in the community in which he is working to participate in the envisioning and creation of each installation. “I consider myself a cultural producer in a creative field,” he explained. “Through collaboration and engagement, a community can together create an artwork that can stand alone as valuable. The process can be meaningful to both the participant and the consumer or viewer of the product, and purpose of the work is to identify and engage other purposes.”

Public art is about so much more than sculpture. It is about creating dynamic experiences with art in the urban environment.

Henry’s residency is part of the Kenan Institute’s new initiative, Creative Catalysts, a five-year strategic plan that will allow the institute to continue to build creative community by empowering leaders, entrepreneurs and innovators in the arts; enhancing the physical environment through innovative programming; and engaging the power of artists to improve the human condition

“Over the next five years, the Kenan Institute for the Arts is committed to supporting artist leadership and creative placemaking in Winston-Salem,” Madden said. “Kendal’s work as both a public artist and director of the City of New York’s Percent for Art program are prime examples of the impact creative individuals can have in their communities. We are excited to share his talent and outlook with our creative community, and we can’t wait to see what he creates while he is here.”

Kendal Henry has been a practicing artist specializing in the field of public art for more than 25 years. He has created installations across the United States, as well as Europe, Russia, Asia, Central Asia, Papua New Guinea, Australia and the Caribbean. He is currently the director of the New York City Department of Cultural Affairs Percent for Art Program and an adjunct professor at New York University’s Steinhardt School of Culture, Education and Human Development. He is a guest lecturer at various universities and educational institutions including the Abbey Mural Workshop at the National Academy Museum & School of Fine Arts; Rhode Island School of Design Senior Studio; and Pratt Institute’s Arts and Cultural Management Program.

Previously, Henry served as the director of culture and economic development for the City of Newburgh, New York, where he created the region’s first Percent for Art Program. He also served as manager of arts programs at the Metropolitan Transportation Authority (MTA) Arts for Transit for 11 years, overseeing the commissioning, fabrication and installation of MTA’s permanent art projects, serving as a member of the MTA’s in-house design team and producing temporary exhibitions at Grand Central Terminal. He also served two three-year terms on the Americans for the Arts Public Art Network Council.