David English, the 2018 winner of the Young Alumni Award at Appalachian State University, said, “Appalachian … truly changed the trajectory of who I am in life.”

English, who is executive vice chancellor and provost of the University of North Carolina School of the Arts, was recognized during Homecoming Week 2018 by the Appalachian Alumni Association as an outstanding representative of the university through his work, service and philanthropy.

At the Alumni Awards Luncheon held Sept. 28 on Appalachian’s campus, Chancellor Sheri Everts said of the award winners, “Year after year, I am inspired by the extraordinary Appalachian alumni I am fortunate to meet, who reinforce that Appalachian is indeed North Carolina’s premier, public undergraduate institution of higher learning. They enhance the value of an Appalachian degree and help define what it means to be a Mountaineer.” 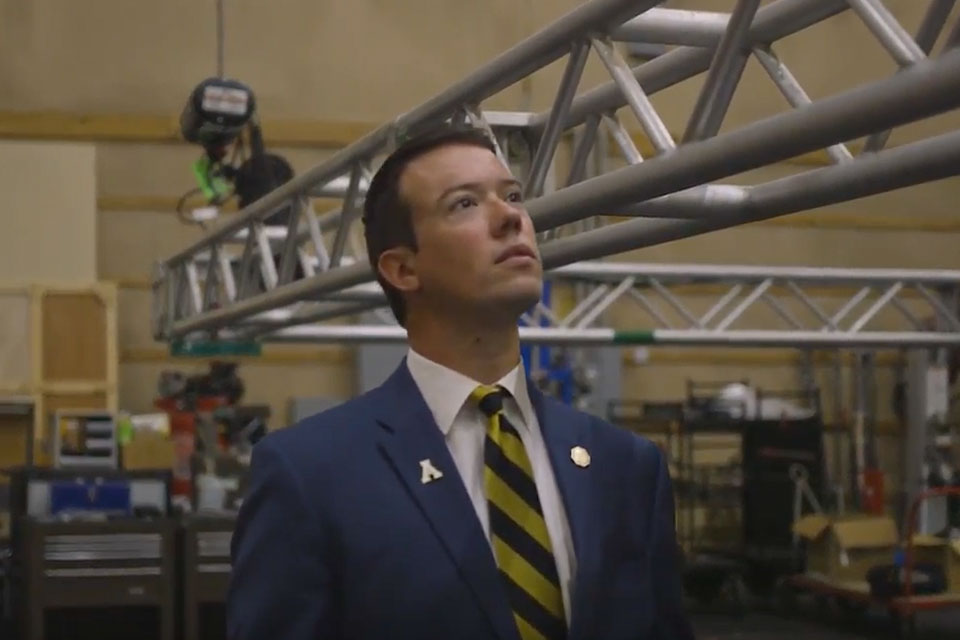 On accepting the award, English said, “For somebody to think I’ve been able to live up in some way to what was given to me as a student is incredibly gratifying.”

English has a lot in common with B.B. and D.D. Dougherty — the founders of Appalachian. Like them, he grew up in the mountains of Western North Carolina, has taken on a leadership role in a university at a young age and is passionate about education.

Prior to becoming EVCP at UNCSA, English served as the school’s interim provost during 2016, vice provost and dean of academic affairs from 2013–16 and associate provost from 2010–13.

Dr. Susan McCracken ’92 ’05 ’09, director of career development and economic engagement at Appalachian, said she has known English for about 15 years.

“Like the Dougherty brothers, David strives to provide a college opportunity to all those who seek it,” she said.

“There is no doubt in my mind that David will be a college president,” she added, “and I wonder frequently if leading Appalachian will be part of his future.”

I greatly admire David’s transformational leadership. His exceptional charisma, policy chops, strategic agility and commitment to excellence will take him far and define his long-term legacy in higher education.

English also teaches courses on higher education at UNCSA and North Carolina State University. He has presented widely on current higher education policy issues, and his research has been published in journals such as The Review of Higher Education and College and University.

English worked at the University of North Carolina General Administration (now the UNC System Office) from 2008–10 as director of the statewide college access program CFNC.org, and from 2006–08 as business analyst for CFNC Technology and Internet Services, where he coordinated admissions and enrollment issues for the 17 campuses of the UNC System.

He received a doctorate in educational research and policy analysis from North Carolina State University in 2012.

According to Alan Rasmussen ’05, student case manager at Appalachian, English’s love for Appalachian is unmatched. “David is never shy in sharing his academic roots and stays in close connection with faculty and staff,” he said.

Over his eight years at UNCSA, English has amassed a long list of accomplishments, including developing an academic, for-credit summer session, transitioning the university from a trimester calendar to a semester calendar, and playing a leading role in UNCSA’s reaffirmation of accreditation.

“It would be an understatement to say all these initiatives have been successful,” said Jim DeCristo, vice chancellor for economic development and chief of staff at UNCSA. “Without his wisdom and leadership, we could not have made the progress we have as a campus over the past eight years,” he added.

Since knowing English, DeCristo has noticed English’s deep appreciation for Appalachian. He said English, in his role as provost, is a UNCSA Pickle — the mascot of the university — on the outside, but “in his heart, he is a Mountaineer.”