The UNCSA community is saddened by the loss of Gerald Freedman, dean emeritus of the School of Drama. Freedman died today at his home in Winston-Salem. He was 92.

An internationally renowned stage director and educator, Freedman retired in 2012 after serving as dean of the School of Drama for 21 years. Under his guidance, the School of Drama became one of the highest ranked undergraduate and high school acting conservatories in the nation. 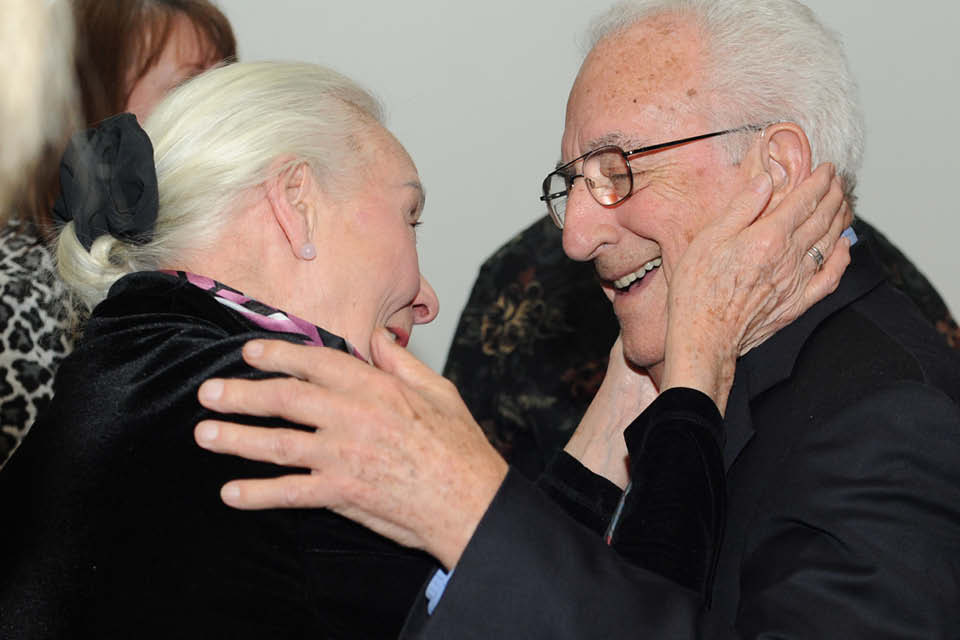 He suffered a major stroke in February 2011 which initially left him unable to stand or even swallow. A remarkable recovery allowed him to stand and address graduates at the Commencement ceremony just three months later, and he resumed administrative and teaching duties that fall. Even after he retired as dean, he continued to teach classes until 2013.

In 2012, he was named dean emeritus, and the largest theater on campus was named in his honor. At the dedication celebration that November, Freedman said he was touched to have the theater bear his name. “The reputation of the School of Drama and the quality of the talent we produce yearly is what I am most proud of in my 60 plus years in the theatre. I live in the work of my students,” he said.

“Gerald Freedman created an unmatched level of love and dedication in his students, due both to the rigor of his teaching and the passion of his artistry,” said Dean of Drama Scott Zigler. “Much of what the School of Drama is internationally recognized for today is due to the foundation created under his visionary leadership.

“On a personal note, Dean Freedman provided me an invaluable level of support from the day he came to campus to see my lecture to the student body during my interview process. In particular, we immediately bonded over our shared love for the writing of playwright Adrienne Kennedy,” Zigler said. “During my onboarding, Dean Freedman made himself available, as his health allowed, to answer my questions and provide a level of wisdom and guidance in the running of the School of Drama that only he could. His passing leaves a hole in the heart of the School of Drama that will never be filled, but his legacy will continue to serve as an inspiration for all of us who are associated with the school.” 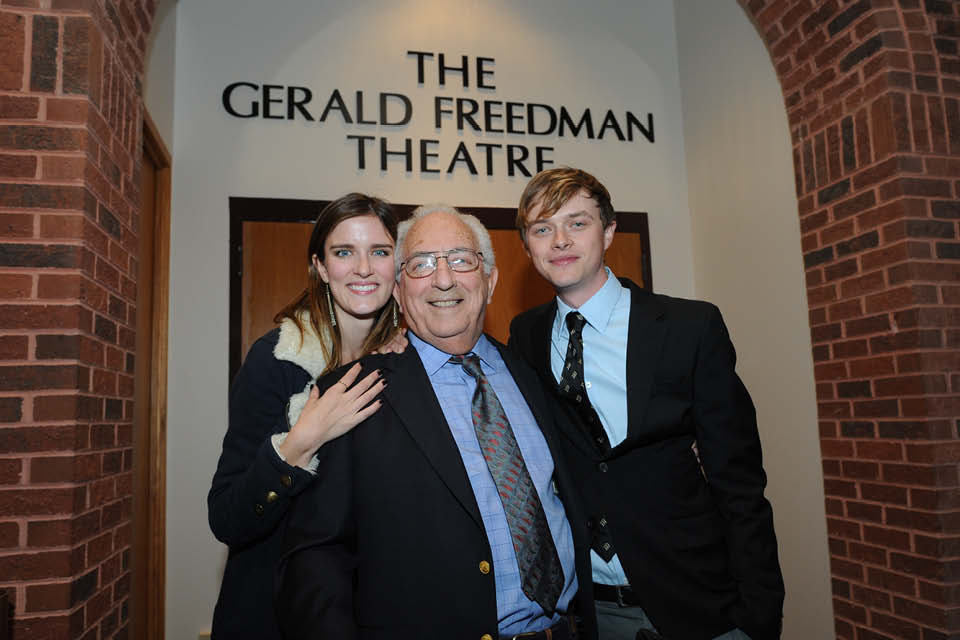 Anna Wood and Dane DeHaan spoke at a gala event on campus in 2012, when the Freedman Theatre was named in his honor.

Freedman arrived at the School of the Arts in 1991, bringing a treasure trove of experience, the respect and admiration of theater luminaries, and a passion for teaching what he knew. “The defining mission of Gerald’s life was the training of first-rate theater artists,” said Isaac Klein, an alumnus and author of “The School of Doing: Lessons from Theater Master Gerald Freedman.” Published in 2017, the book is a tribute to Freedman, with half of its profits pledged to the Gerald Freedman Excellence Endowed Fund at UNCSA.

Many of them contributed to Klein’s book, and some, including Dukakis and Patinkin, have visited the UNCSA campus at his request. 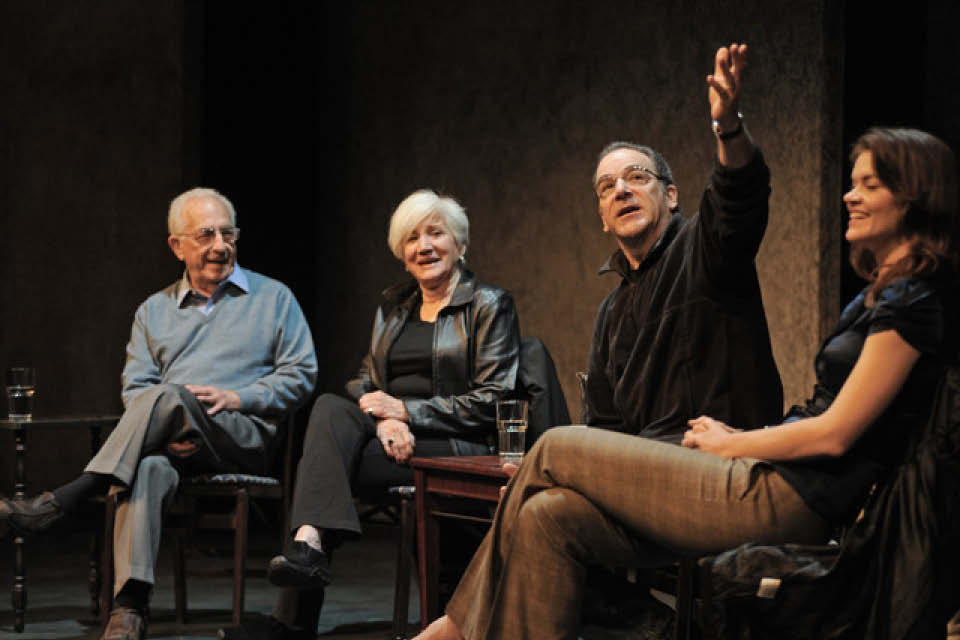 Patinkin wrote the forward to Klein’s book. “I would not have been anything that I have become, in terms of whatever I’m considered as an artist, without Gerald Freedman,” he wrote. “He is my artistic DNA. He is my artistic father.” Patinkin was Freedman’s student at The Juilliard School, where Freedman directed him in Webster’s “The Duchess of Malfi.”

In 2012 DeHaan recalled his first meeting with Freedman, in the theater that now bears his name:  “He told us to fail, fail hard, and do not apologize for failure because that is how you learn.”

Prior to coming to UNCSA, Freedman taught at Yale University and at The Juilliard School, where his students included the late comedian and actor Robin Williams, Mandy Patinkin, and Robert Beseda, who became his best friend and his associate dean at UNCSA . 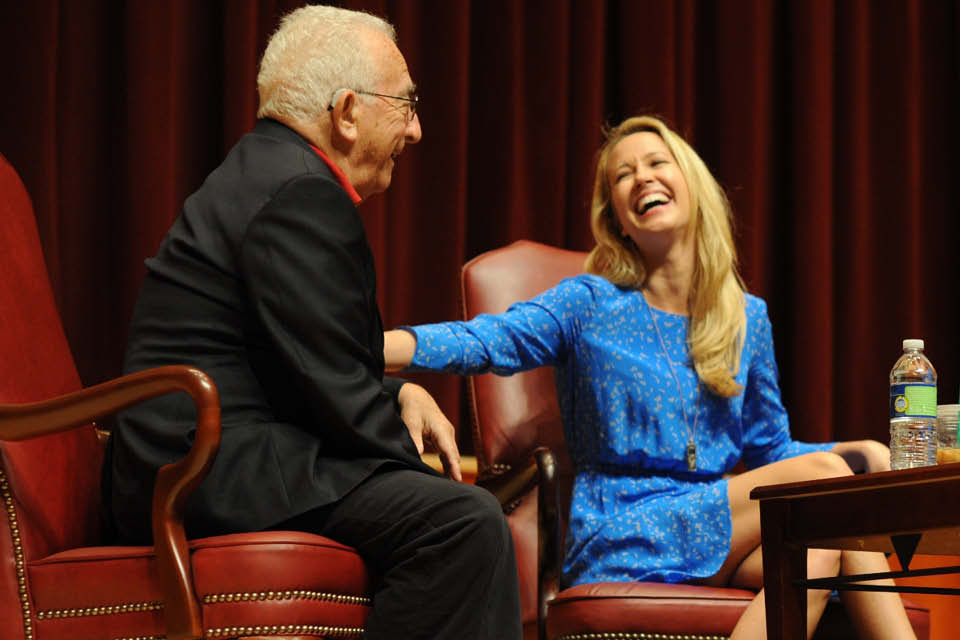 Gerald Freedman began his career in New York City as a scenic designer/painter, night club singer, pianist, and cantor, and then worked in Hollywood as a dialog director with stars including Joan Crawford, Charleston Heston, Humphrey Bogart, Jack Lemmon and Judy Holiday. For television, he directed “Oldsmobile Music Theatre” for NBC, “The DuPoint Show of the Month” for CBS, episodes of “Rin Tin Tin” and “Blondie,” and PBS’ critically acclaimed “Antigone.”

He collaborated with five-time Tony Award-winning choreographer, director and producer Jerome Robbins on the groundbreaking original Broadway productions of “West Side Story” and “Gypsy.” He and Robbins co-directed the 1980 Broadway revival of “West Side Story.” Other Broadway directing credits include “The Robber Bridegroom”; “The Grand Tour” with Joel Grey; the premiere of Arthur Miller’s “The Creation of the World and Other Business”; and Shaw’s “Mrs. Warren’s Profession” with Lynn Redgrave and Edward Herrmann.

In 1960, Freedman won an Obie Award for excellence in off-Broadway theater, for directing “The Taming of the Shrew” in Central Park for the New York Shakespeare Festival. He served as the festival’s leading director for more than a decade, and its artistic director for four years. In 1967, he directed the world premiere of the rock musical “Hair” at the Public Theater.

Freedman was artistic director of the Great Lakes Theater Festival in Cleveland, Ohio, from 1985-1997, directing 28 productions including Shakespeare’s  “King Lear” and Arthur Miller’s  “Death of a Salesman,” both with Hal Holbrook.

Freedman directed at regional theaters across the country, including The Old Globe in San Diego, The Mark Taper Forum, Hartford Stage, Yale Rep, Shakespeare Theatre of DC, and Williamstown Theatre Festival, where he notably directed former student Mandy Patinkin in “An Enemy of the People.”

Internationally, he directed in London’s West End, Paris, Tel Aviv, Adelaide (Australia), Istanbul, and was the first American to direct at Shakespeare’s Globe in London in 2000. He directed 28 of Shakespeare’s plays in over 50 productions between 1952 and 2011.

In 2008, he received the North Carolina Award for Fine Arts, the state’s highest civilian honor, in recognition of “his continued dedication to North Carolina’s students of the dramatic arts and in recognition of his remarkable career as a director and educator.”  He served on the board and was voted a Lifetime Member of the Society of Stage Directors & Choreographers, served on the board of the Kennedy Center Fund for New American Plays, and was inducted into the College of Fellows of American Theatre. He was a recipient of Northwestern University’s President’s Medallion and the Cleveland Arts Prize for Distinguished Service to the Arts.

Freedman will be buried at Salem Jewish Cemetery in Sheffield Township, Ohio, with arrangements by the Boyer & Cool Home for Funerals in Lorain, Ohio. “We regret that we cannot gather at this difficult time, but thank you for your love and support from afar as we say goodbye to this amazing man, my best friend,” said Robert Beseda.

Memorial donations may be made to the Gerald Freedman Excellence Endowed Fund at the UNCSA Foundation, 1533 South Main St., Winston-Salem, NC 27127, or online.