A performance by the renowned Kostov-Valkov Duo featuring alumnus Lachezar Kostov is a highlight of several free livestreamed concerts by the School of Music at the University of North Carolina School of the Arts (UNCSA) this month. The duo will perform An Evening of Beethoven Sonatas, featuring the composer’s five sonatas for cello and piano, written over the span of 25 years, at 7:30 p.m. Saturday, April 17, to be livestreamed from Watson Hall. Kostov is the newly appointed associate principal cellist with the Baltimore Symphony Orchestra.

Additional student and faculty offerings for the month include recitals by the guitar, horn and piano studios, and concerts by string and percussion ensembles. Tickets to all events are free and available online or by calling the Box Office at 336-721-1945. (See this press release for information about  additional concerts featuring guest artists in April.) 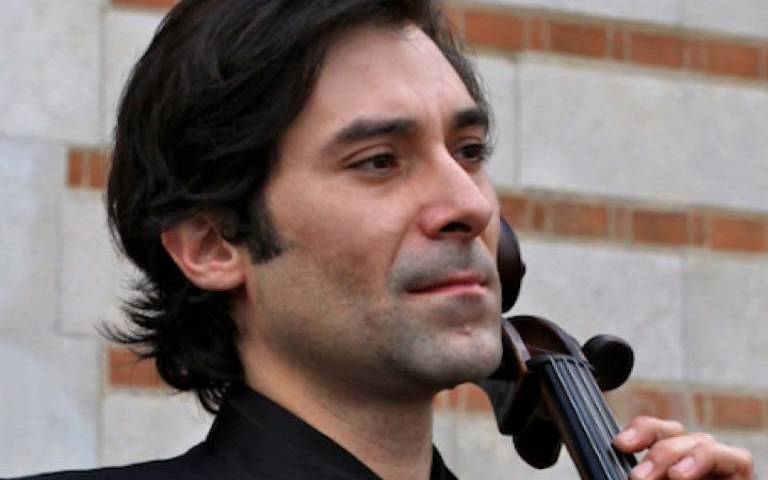 Alumnus Lachezar Kostov will perform a livestreamed concert on April 17.

Cellist Kostov, who received his Master of Music at UNCSA in 2006, has appeared as a soloist and chamber musician throughout the United States, Japan, Italy, Germany, the United Kingdom and his native Bulgaria. Prior to his appointment with the Baltimore Symphony he was a tenured member of the San Antonio Symphony and also performed regularly with the Houston Symphony. While at UNCSA, he won the concerto competition and was the national winner in the Young Artists Competition of the Music Teachers National Association.

Kostov has toured worldwide as part of the Kostov-Valkov Duo, with pianist and University of Utah faculty member Victor Valkov. The Kostov-Valkov Duo made its Carnegie Hall debut in Zankel Hall in 2009, and in 2011 won the Liszt-Garisson International Competition, where it was also awarded the Liszt Prize and all special prizes in the collaborative artists category. The duo has recorded two CDs.

UNCSA guitar students will perform an eclectic mix of repertoire from the 17th through 21st centuries. The concert will highlight high school, undergraduate and graduate students of faculty-artist Joseph Pecoraro performing in guitar ensembles and as soloists.

The UNCSA Horn Studio led by faculty-artist Maria Serkin will celebrate the life and career of founding horn instructor Fredrick Bergstone. In addition to student performances, the concert will include a recording of Bergstone pulled from the archives, and a virtual horn choir performance by his former students and horn colleagues, including the horn section of the Winston-Salem Symphony. Student performances will include works by Eugène Bozza, Alan Abbott, Andrea Clearfield, Bernhard Heiden, Václav Nelhýbel, Gilbert Vinter, and a horn choir arrangement by Fred Bergstone.