With Portray'd Productions, alumna Anna Ray aims to give voice to untold stories

When Anna Ray (M.F.A. Filmmaking '20) joined the graduate Creative Producing program, she was just back from a two-and-a-half year stint teaching English in Madrid. It was there that she was able to cultivate a long-standing interest in filmmaking and began to discover the kinds of stories she wanted to tell as a filmmaker.

From that exploration, her company Portray'd Productions was born. Portray'd, based in Wilmington, N.C., is dedicated to telling Black Southern stories through an intersectional lens. Over the last year, Ray has focused on the work of her production company, while also working as Programming Coordinator for the Cucalorus Film Festival and on the set of the Starz series "Hightown."

A year out from completing her degree, Ray shares with us her journey into the filmmaking industry and how she's building a career right here at home in North Carolina. 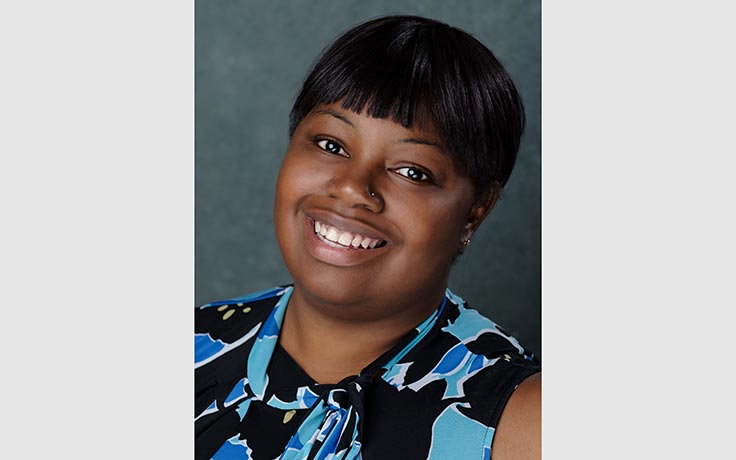 Your undergraduate degree was in journalism and you also taught English in Spain before graduate school. How did you end up in filmmaking?

I did not have a very linear journey to film. I always liked film and I thought I wanted to act, so my parents put me in theater and all of these arts-based programs when I was younger. That's where I thought my heart was going to be until I got old enough to work and got my first job as an on-air DJ at a small AM radio station. That's what brought me to journalism school at ECU [East Carolina University], where I double majored in Spanish.

After graduation, I was applying to a lot of radio jobs and not really getting any traction, so I put in an application to teach English in a program in Spain and I did that for two-and-a-half years. I started making shorts in Spain with a couple of filmmakers who were also teachers and masters students and built my portfolio with the plan to go back to America and apply for film school.

You joined the Cucalorus Film Festival in Wilmington, N.C. as Programming Coordinator last summer. Tell us about your role with Cucalorus and what else you've worked on over the past year.

As the Programming Coordinator at Cucalorus, I'm in charge of coordinating the official selections and the volunteers that help with programming. After the films are submitted, they come to me and I invite all of the volunteers — and for the first few months, I sort out submissions and assign them to our volunteers to be seen and scored. I keep track of who has seen what, how much has been seen, what it's rated, whether it goes to the next round. Last year, which was a small year, we received 992 submissions.

I actually just renewed my contract with Cucalorus for a second year. I worked for the festival last July through mid-December. The week after that ended, I got hired as a props P.A. and buyer on the second season of "Hightown," which was filming in Wilmington. I did that from January through April and I started back with Cucalorus in May. In my downtime, I've been working on Portray'd Productions work.

Tell us about your company, Portray'd Productions. How did that come about?

I realized something about myself when I was in Spain, where I felt like I was teaching my culture for the first time. Teaching American culture is such a vague thing because there is no one set "American" culture. I really started to dive into, "What is my culture?"

Everything the students knew about American culture was from TV shows and movies, ironically. There was a disconnect between what I was telling them and what they've seen. And I realized there aren't really a lot of portrayals of the Black South that aren't surrounded by trauma, struggle or history. It's never a modernized telling of the Black South, it's always Jim Crow or slavery. Or, it's the Black experience in Southside Chicago or Baltimore. All of those stories are valid, but the students were asking "What kind of Black person are you?" Well, I'm all of those things and none of those things.

So, Portray'd is something that first came about when I was in Spain working on short films and I wanted branding for the shorts I was making. And it kind of took on its own life during the pandemic, where now it's more of a production company about telling Southern Black stories.

What did you learn at UNCSA that you find yourself applying in the work you're doing now?

The good thing about going to film school and then working at a film festival is that I know what it feels like to be the filmmaker. I keep a lot of those thought processes in mind when, as an organization, we're talking about changes and things we want to make better. A lot of what I learned at UNCSA is just being in that atmosphere. Being around other filmmakers has definitely shaped how I think about my job as a film festival programmer.

And with Portray'd, almost everything that I do with it is because of things that I learned at UNCSA — from the way that I think about a project to how I budget for it to how I negotiate contracts with local photographers.

With the benefit of a year's worth of reflection, what is a piece of advice you would give yourself at the end of your senior year?

Be intentional and stay true to what your goal is. For me, I knew that L.A. was not the track that I wanted to take. North Carolina and Southern film was what I cared about. And I knew that no matter how many people said L.A. is the only way to be a filmmaker, that for me, North Carolina film was what I wanted. I wanted to make sure that what I was doing made me happy. And it just didn't make sense to go to L.A. — my story is about being Black in the South. So, be intentional, be patient and be true to YOUR voice.

Can you share a significant memory from your time at UNCSA?

When alumna Rebecca Green came to lecture, that was great. She opened our eyes to a lot and she brought in a whole new set of ideas and opinions and ways of doing things. It was very reassuring to hear her say, "This is what I tried and what worked for me."

The thing that made the biggest difference for me at UNCSA was my cohort. I got very lucky. I made friendships with people that I admire as talented artists and who really took the time to ask the right questions to help me figure out who I was and what stories I was trying to tell.