After commencement, it's Shakespeare in the Park and off-Broadway for scene design graduate Romello Huins

When Romello Huins returns to New York City after commencement, the 2021 graduate of the scene design program in the School of Design & Production will be on the move as soon as the plane hits the tarmac. He'll be working with Tony-winning designer Beowulf Boritt on "Merry Wives of Windsor" at Delacorte Theater, part of the Public Theater's "Shakespeare in the Park" series that is returning this summer. Additionally, he’ll continue his ongoing work as the scene designer for the off-Broadway show "The Last Boy."

Huins is no stranger to hard work, as his senior year at UNCSA proves. Over the course of the last year, Huins was the scene designer for the School of Drama's devised play, "Inheritance," creative director for Artists of Color's Live Art Exhibition "Behind Closed Doors" and co-artistic director of the student production "FREEDOM vs. RELEASE" with fellow fourth-year scene design student Lizbeth Ramirez.

As his year wound to a close, Huins took the time to share with us his reflections on his time at UNCSA and what's ahead as he returns to New York. 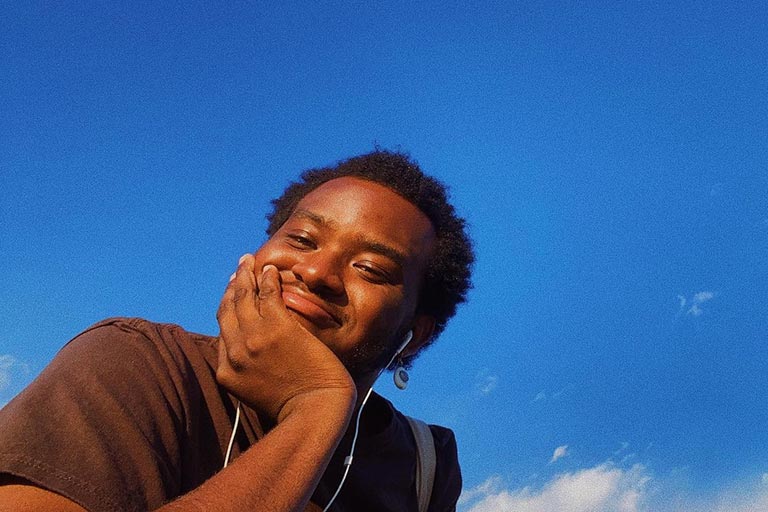 What are your plans after graduation? How did that come about?

In 2021, so many things have happened with my career that I do not even believe. Ethan Saiewitz, who graduated in 2020 from the lighting design program, referred me for work on an off-Broadway show, "The Last Boy." I'm currently designing the show, so just to think that I'm leaving school having designed for an off-Broadway show blows my mind.

I also have a second job. In February of this year, Beowulf Boritt, a Broadway set designer who's designed "Come From Away" and "A Bronx Tale," emailed me and said, "I love your work on Instagram. I want to see if you have any interest in assisting me on a show." He invited me to come to New York and help him with "Merry Wives of Windsor" at the Delacorte Theater [for the Public Theater's "Shakespeare in the Park" series]. So when I get off the plane after I graduate, I'll be going straight to rehearsals.

What is a challenge you overcame during your time at UNCSA?

There was a point where, in my second year, I had never experienced a workload like that. And I started thinking, "This is just not for me. I'm done." But then I had a talk with Steve Gallagher (Executive Director of Student Affairs). He kept saying, "Trust the process." And so, my second year was rough, but I kept remembering to trust the process.

During that year, my professor John Coyne recommended reaching out to all the top designers living in New York to see who would respond about opportunities for the summer. My goal has always been to design on Broadway. I got in touch with Alexander Dodge, who is the designer for "Anastasia," and he needed an intern. That summer, I went and worked with him in the studio (and still work with him). I also worked with his associate at the time, Ann Beyersdorfer.

I helped with one of her shows, "Fly More Than You Fall." And when I returned back to school, we found out that it ended up winning best musical from Broadway World that year — and I was labeled as assistant set designer.

If you could say thank you to one person at UNCSA who would it be?

Steve Gallagher. That man is so brilliant. He loves students and seeing people he cares about thrive. Welcome Squad is something that I cherish because it built me as a person. We go on this three-day retreat and we learn so much about who we are and how we go about in the world and how to "trust the process." Steve really put grit into my whole educational system and I love that.

And I have to thank Marsha Dove, a case manager in Student Affairs. Throughout my four years, she definitely centered me as a person and brought me back down to earth. She helped me to be comfortable with who I am. The whole Student Life team... those people have carried me over the last four years.

The Artists of Color Live Art Exhibition "Behind Closed Doors" and your independent study project, "FREEDOM vs. RELEASE," were two big projects you worked on this year at UNCSA. Can you tell us about those?

Those two pieces are passion projects. It took me a long time to figure out what I wanted to represent as creative director for "Behind Closed Doors." I started realizing that with Black Lives Matter, with COVID-19 — I read an article one time, that said newscasts and social media only give us about 20-30 percent. And 20-30 percent is just enough for people to get a little information, talk about it and forget it. And I think the rest of that 70 or 80 percent of what we don't see is scary. That's the stuff we don't want to have conversations about or we're not knowledgeable about. But, although it's scary, it has to be known and we have to heal.

And so I came up with this thought, "What is the world behind closed doors?" The purpose of Live Art this year was to get people to view what's behind others' closed doors so they can explore what's behind theirs.

When the exhibition opened, there was a comment from someone: "That experience was transcendent." That was beyond what I thought any of this would be. If it moved one person, that's a job well done.

For that to be the final culmination of my time at UNCSA, I think it's going to last, for me and for my fourth-year class. It's so groundbreaking to see that we were able to do that all on our own, especially with all of the restraints on us. It's a testament to the future, that we will always prevail.

And "FREEDOM vs. RELEASE"?

That was an independent study in Artistic Direction and Producing. I worked alongside Lizbeth Ramirez on the section called "FREEDOM." I wanted to artistically direct a play, and "FREEDOM" is a script from a Rutgers student, Jahquale Mazyck. It was a short play with an all-Black cast. And Liz did "RELEASE," choreographed by fourth-year dance student Chris Crawford.

What is something you wish someone had told you when you were a new student at UNCSA?

My professor Joe Tilford told me a few weeks ago, "Hard work beats talent when talent doesn't work out."

If you don't put in the effort, the talent means nothing. And hard work was the thing that got me through UNCSA.

Everyone comes to this school because they are talented in some way. But there will always come a time when talent is not enough. And I realized that my second year. If you don't put in the effort, the talent means nothing. And hard work was the thing that got me through UNCSA.

That's the grit that Design & Production puts in all of us. You have to find the balance of the talent and the hard work. And if you can find that balance, you're going to make it.