"Leap!" is currently available to stream on Netflix.

6 dance movies and series for young audiences to enjoy

Aspiring dancers have long looked to film and television to introduce them to the world of dance. Rachel Holleman, serving as both Preparatory Dance Program artistic administrator and instructor, is fully immersed in the world of young dancers and is constantly looking for films and series that can be used as inspiration for her students.

With classes offered for students as young as five years old, Preparatory Dance focuses on giving young dancers the etiquette and skills necessary to build a solid foundation in ballet technique while also instilling a love of dance. We caught up with Holleman, an alumna of the contemporary dance program, to find out a few of her favorite dance films and series for young audiences. 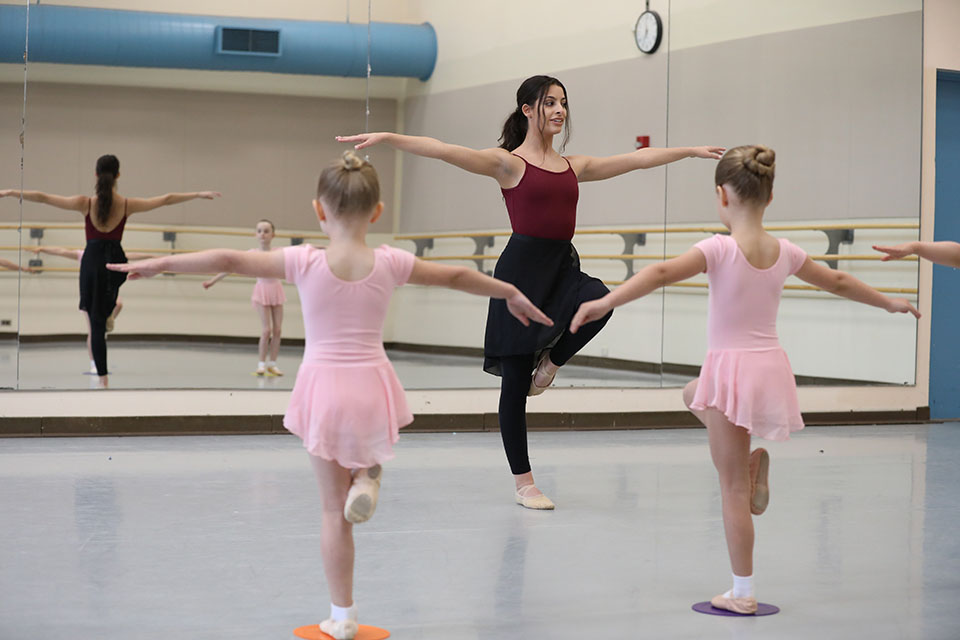 Alumna Rachel Holleman serves as both an instructor and the artistic administrator for the UNCSA Preparatory Dance Program. / Photo: Chris Record

Based on the book series of the same name by author Katharine Holabird, Holleman says that “Angelina Ballerina is fun for kids with great life lessons packed in.” Following a young mouse named Angelina who loves to dance ballet, the series’ voice cast includes acting veterans Finty Williams, Judi Dench and Derek Jacobi. Two seasons are currently available to stream on Netflix.

This animated film follows a poor orphan girl Felicie (Elle Fanning) who dreams of becoming a ballerina as she gets a chance to audition for the world-renowned school of the Paris Opera Ballet. Holleman included this on the list stating, “this film is a wonderful encouragement to take a leap of faith and follow your dreams even when it’s hard.” “Leap!” is currently available to stream on Netflix.

“Happy Feet” takes you inside the world of Empire Penguins living in Antarctica as you follow Mumble, the only penguin in his colony that can’t sing — but can tap dance unlike anything anyone has ever seen. Boasting a star-studded voice cast including Elijah Wood, Brittany Murphy, Robin Williams, Nicole Kidman and Hugh Jackman, Holleman calls this animated musical comedy “a great example of embracing what your gifts are!” “Happy Feet” is currently available to stream on HBO Max.

"An American Girl: Isabelle Dances into the Spotlight"

In this installment from the beloved American Girl series, Isabelle is a student attending a performing arts school with a passion for both dance and sewing. In the film, Isabelle must push past her insecurities in order to land a role in a professional ballet and the possibility of going to a prestigious dance school. Holleman includes this film because it “shows you to never give up and pursue what you're passionate about.” The film is currently available for rent on Amazon Prime.

Leaping into the world of both Broadway and competitive dance, “Feel the Beat” tells the story of April (Sofia Carson) as she returns to her hometown in rural Wisconsin after failing to make it as a professional dancer in New York City. April begrudgingly coaches dancers from her old studio in an attempt to make a comeback and ends up learning as much from them as they do from her. Holleman adds this to the list because it “opens your eyes to how hard work pays off and how true dedication to what you love is very enriching.” The film is currently available to stream on Netflix.

“Hope Dances” follows young dancer Hope as she is torn between the worlds of ballet and softball. Holleman ends the list with this film because it is a “great example of what it means to follow your heart and what you’re passionate about.” The full film is currently available to stream on YouTube.