Thompson teaching a class from his office / Photos: Blake Ellis

Screenwriting faculty Ron Stacker Thompson on acting, teaching and the power of storytelling

Ron Stacker Thompson always knew he wanted to teach. In fact, the chair of the School of Filmmaking's Screenwriting department started his professional career as an educator, teaching English at the high school and college levels. In the time between those early teaching days and his decades-long tenure as a UNCSA professor, he also had many highly successful years in theater and film.

Though the medium has varied, the throughline in Thompson's career has always been one of storytelling. "In theatre, filmmaking, writing, acting — all of those things are about telling the truth and creating characters who tell the truth. It might not always feel like your truth, but it often is,” he says. “What always catches me are the things people go through that are so similar."

His mission in the School of Filmmaking is to help guide filmmakers toward a similar appreciation for the power of telling stories — by finding their own voices and discovering the joys in writing. 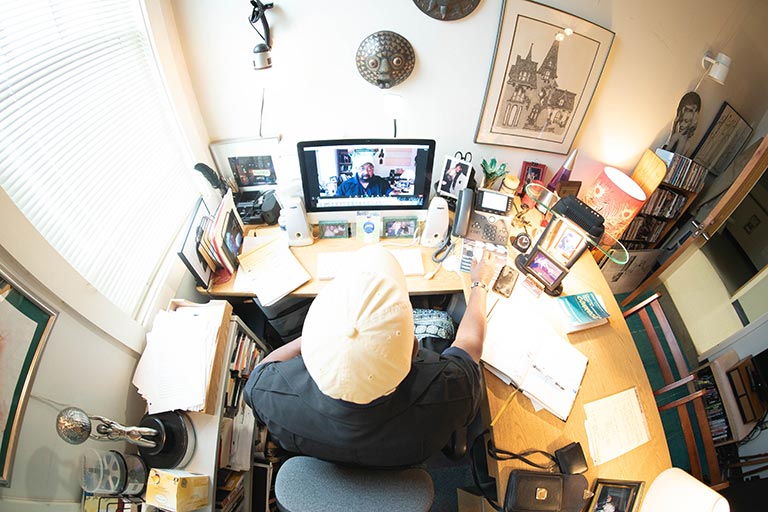 Thompson teaching a class via Zoom

Thompson grew up in Chicago knowing he wanted to be a teacher, and attended Illinois State University, which was at the time dedicated solely to training educators. He earned his degree in English and went on to teach high school for a few years before moving to the West Coast, where he worked at Meritt College in Oakland, California. At Merritt, he taught ethnic studies and dramatic arts and ran his own theater company, The Oakland Ensemble Company, that specialized in multi-racial casting.

When he took on the job of teaching drama he had no acting experience and felt that to teach the art it "just made sense" to study acting himself. When he started auditioning, he started getting roles, including as the first Black actor to be cast as Jesus in the national touring company of the hit musical "Godspell."

After immersing himself in theater for many years, he set his sights on film and television. He worked as a screenwriter and producer on several films, including "Sister Act 2," "America's Dream" and "Deep Cover" with actors like Danny Glover, Whoopi Goldberg, Ellen Burstyn, Laurence Fishburne, Jeff Goldblum and Maggie Smith, among others.

Eventually, though, education came calling again, this time at the UNCSA School of Filmmaking.

A sense of belonging

Thompson joined the UNCSA faculty in 1998, a few years after the film school was founded.

The move came after several years working in the film industry, where Thompson found himself questioning his career and longing to teach again.

"The same things I say to my students, I had to say to myself," he recalls. "Did I really want to do that the rest of my life?" Then he heard about job openings at UNCSA and came to campus to tour and interview.

"This place called to me. I felt such a sense of belonging here."

Ron S. Thompson, on his initial feelings about UNCSA

"This place called to me," he says. "I felt such a sense of belonging here." That feeling, he adds, has remained constant across the years, while teaching hundreds of students in the School of Filmmaking.

Creating in the community

That sense of belonging also extends to his work outside of UNCSA, where he's continued to cultivate his love of storytelling through projects in performance, theater and spoken word in the community.

Some of those projects he does for the sheer joy of creating and performing. Two years ago, Thompson and his wife, Cle, celebrated their 50th wedding anniversary with "Daze Of Our Lives," a multi-faceted performance that told the story of their lives through song, dance, acting, comedy and storytelling. 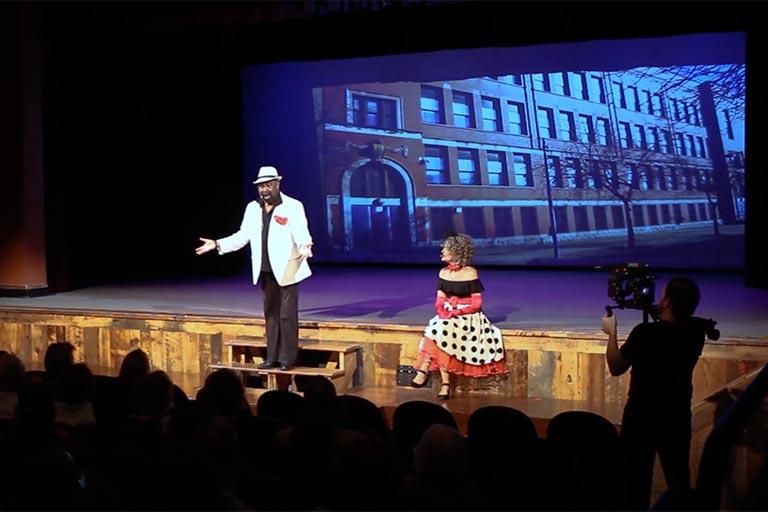 Ron S. Thompson and Cle Thompson in "Daze of Our Lives"

For many years he was artistic director at the Willingham Theater at Yadkin Cultural Arts Center. An outgrowth of that work is the Willingham Story Slam, a partnership with MUSE Winston-Salem (Museum of Understanding, Storytelling and Engagement). The regular events invite community members to participate by sharing short personal stories, often around a theme, similar to NPR's Moth Radio Hour.

"I've lived so many different places, and there is something really special about this area," he says. "There's a quiet, sensitive beauty here that people don't always realize. But I think people are beginning to claim it."

In his years as an instructor, Thompson has developed an individualized teaching style. "I look at every person as the individual that they are. What do they want or need?"

What they haven't realized is that this language is about them, about expressing who they are and how they feel. ... You have something to say. Let's find a way to enjoy that.

One thing he often finds that students have in common, though, is they come into their first year of college with a dislike of English and writing. "What they haven't realized is that this language is about them, about expressing who they are and how they feel," Thompson says. "I had a teacher in high school, Mrs. Sams, who taught me, 'You have something to say. Let's find a way to enjoy that.'" He tries to help Filmmaking students find the joy in their writing through his classes.

Among the courses he teaches is one he created, called "The Business of Show." It's a discovery course about the self, he says — one that instructs on both the practicalities of working in show business and on some of the less tangible aspects of the industry.

"I want students to think of themselves in terms of show business," he says. "There are both negative and positive aspects of the business and I want to help them find ways to navigate those waters."

He encourages them to explore some of those aspects in the class. "What do you do when someone rejects you or your work?" he asks. "Do you get angry with yourself or them? Or do you go back and really think about your work and yourself and them? There's always someone who wants what you have to offer."