At the beginning of January 2020, School of Drama alumnus Hassiem Muhammad set a goal to create an original work by the end of the year. While many might forget their yearly resolutions by Valentine’s Day, Muhammad — who has always been goal-oriented — had the first episode written within two months. The completed first season premiered this month, and viewers can stream new episodes on the series' YouTube channel. Watch the first episode below:

What started as an idea about vigilantes defending Uptown Manhattan became a six-episode web series that Muhammad says is inspired by a few of his favorite action series and films like “Luke Cage,” “Arrow” and “Kick-Ass.” Throughout every aspect of the production process, from his co-collaborator Ebony Sojourner to his co-star Catherine Calloway to many members of the cast and crew, Muhammad reached out to the network of UNCSA alumni that he built during his time as a student.

Here, Muhammad reflects on the process of creating this series from start to finish and the many lessons he has learned along the way.

It all started with an idea

Looking back at the beginning of the creative process, Muhammad had a few different sources of inspiration when creating “Angels of Uptown” and one was wanting to be a part of an action series. “I’ve always wanted to star in an action film or series, and I’m the kind of person who when an opportunity doesn’t present itself, I take it upon myself to create that opportunity.”

Muhammad was also inspired by his favorite aspect of his undergraduate experience at UNCSA: Intensive Arts. “We would write and create original pieces of theater and perform them for our classmates every year and I always valued that time where I was able to tell new and original stories,” he recalls. After graduating, Muhammad was a 2018 Kenan Fellow with Lincoln Center Education, which he describes as a “fifth year of Intensive Arts” because it was another chance to focus on creating in a nurturing and educational environment.

When the pandemic hit in March 2020, Muhammad was out of work and had more free time than he had ever had before. This time served as his ultimate inspiration for the project: “I went from wanting to create a role I would enjoy for myself to there being no roles available at all across the entire industry, so I felt like I needed to create something to stay active.”

While Muhammad acknowledges that there was no “correct” way to get through quarantine and stay-at-home mandates, he says that he’s the type of person that needs to stay productive. “I knew that if I didn’t use all of this free time to create something I was proud of, I would have been disappointed in myself,” he says. During his weeks of quarantine in New York City, Muhammad spent his days writing, working out and reading. By June, he had six episodes written.

Once Muhammad had written the first few episodes, he brought in co-collaborator and fellow UNCSA graduate Ebony Sojourner (B.F.A. Filmmaking ’18) who served as a co-writer and -producer for the series. Together, they made a plan to film the pilot in the summer of 2020. 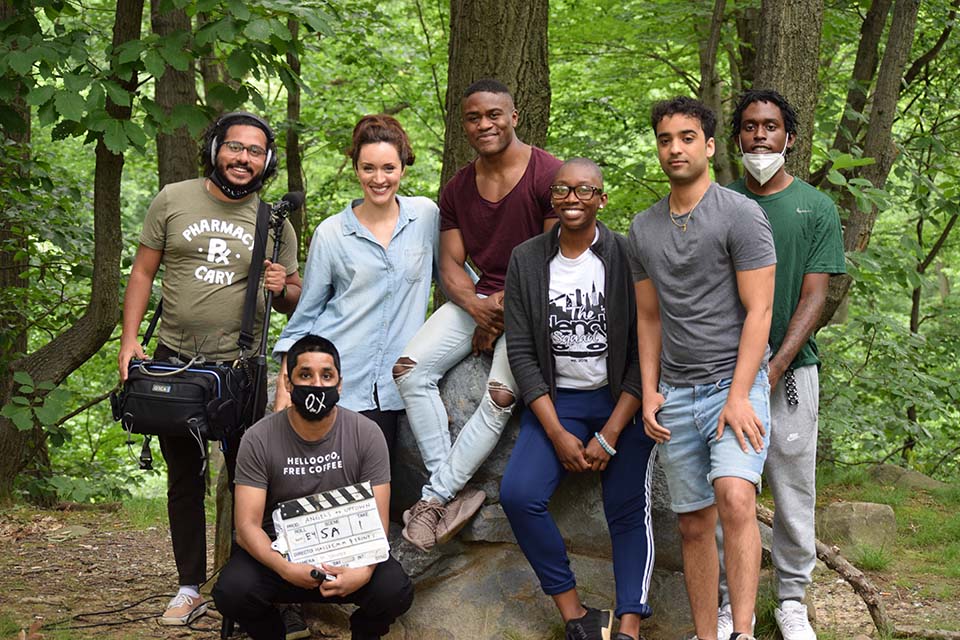 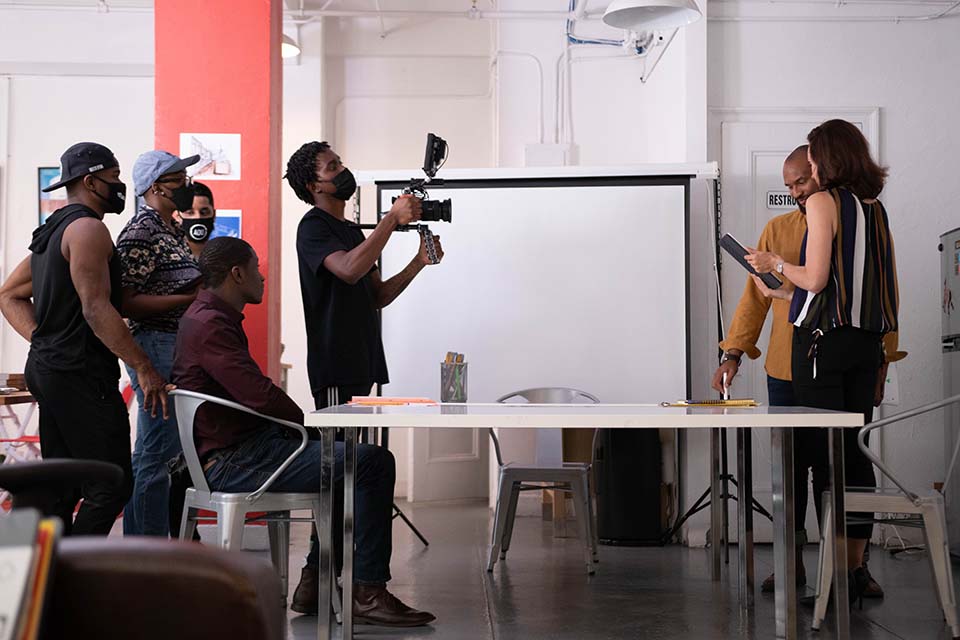 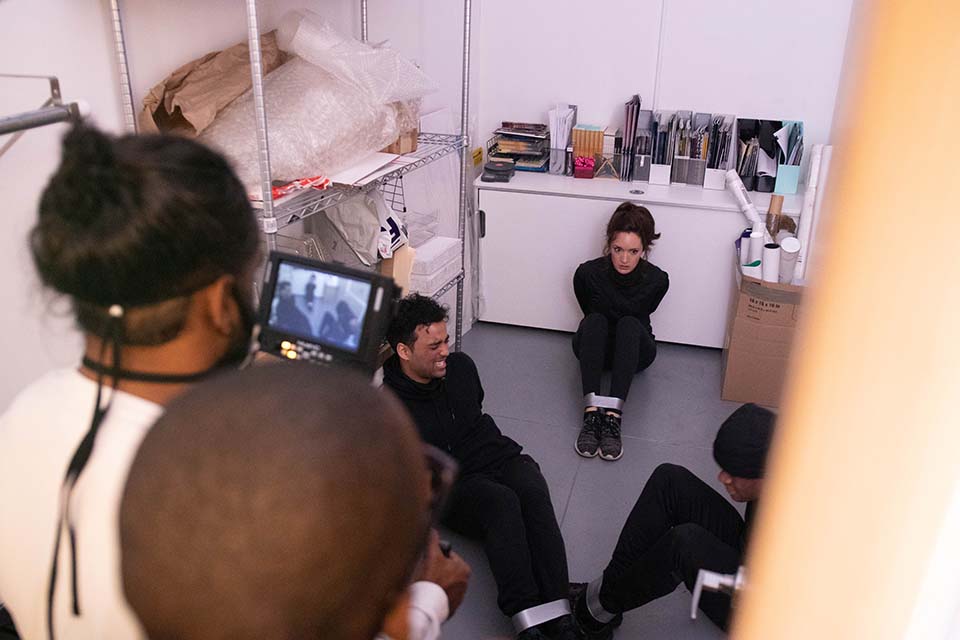 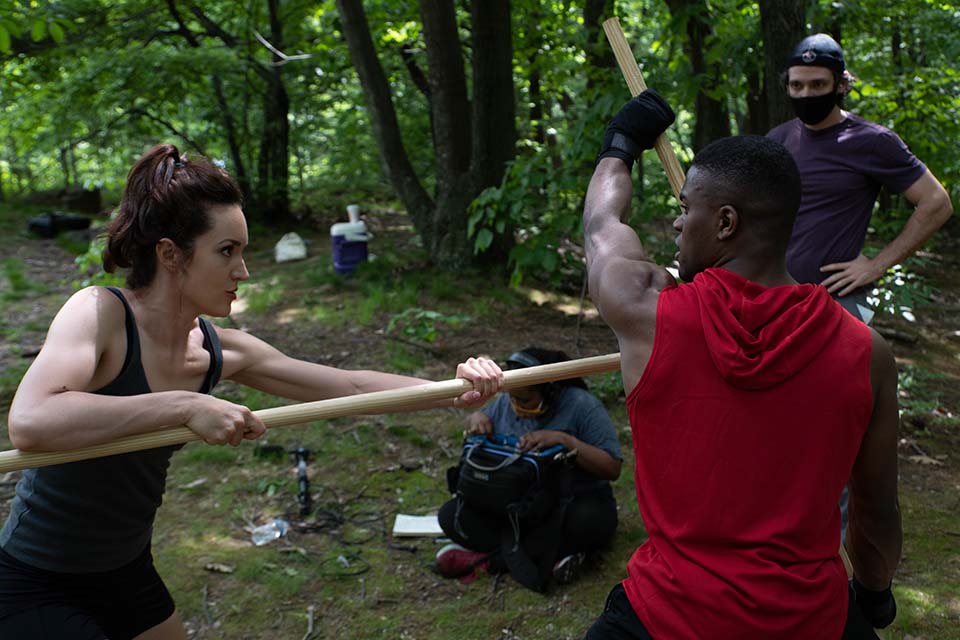 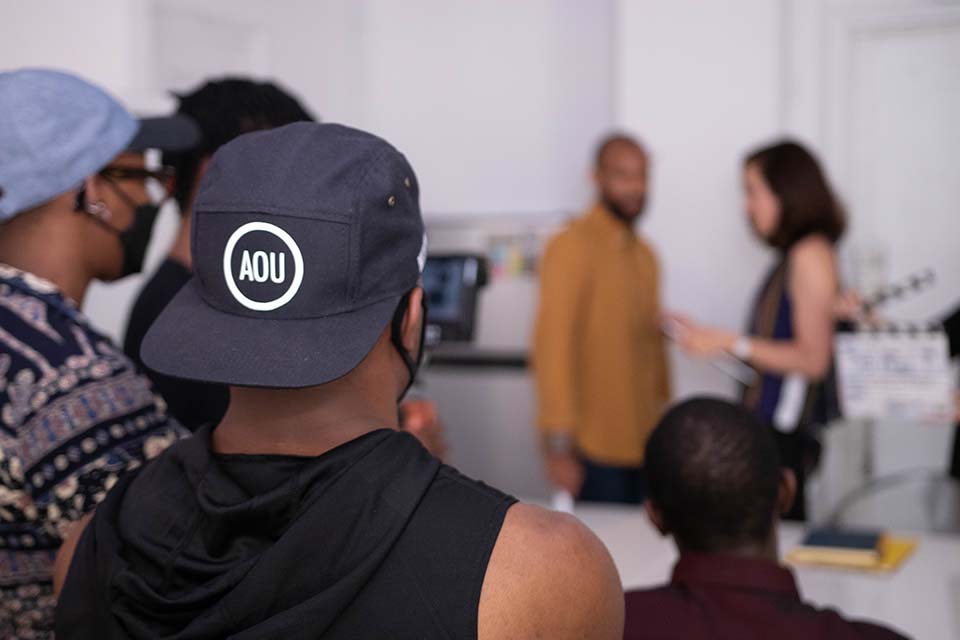 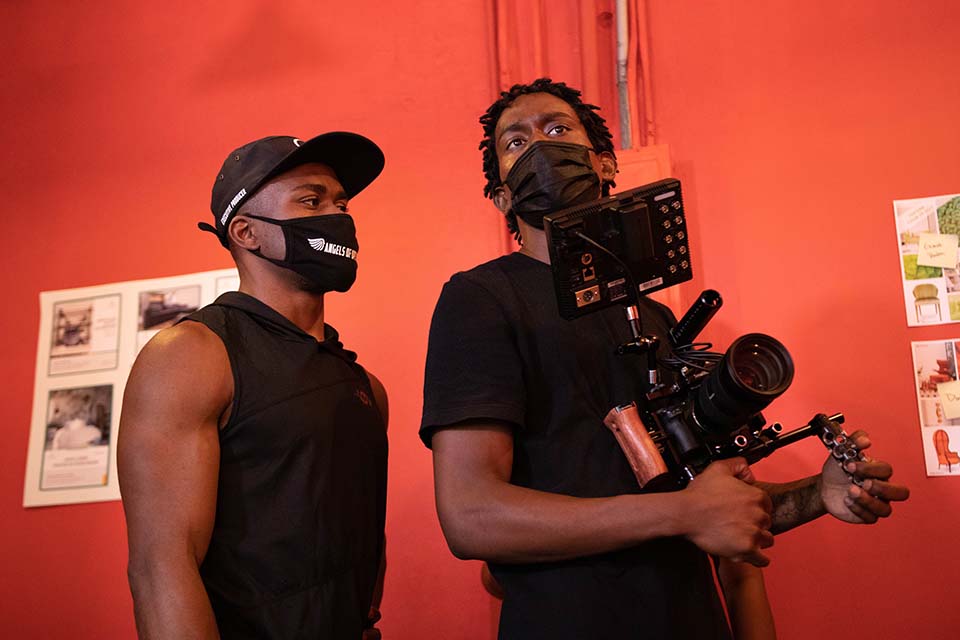 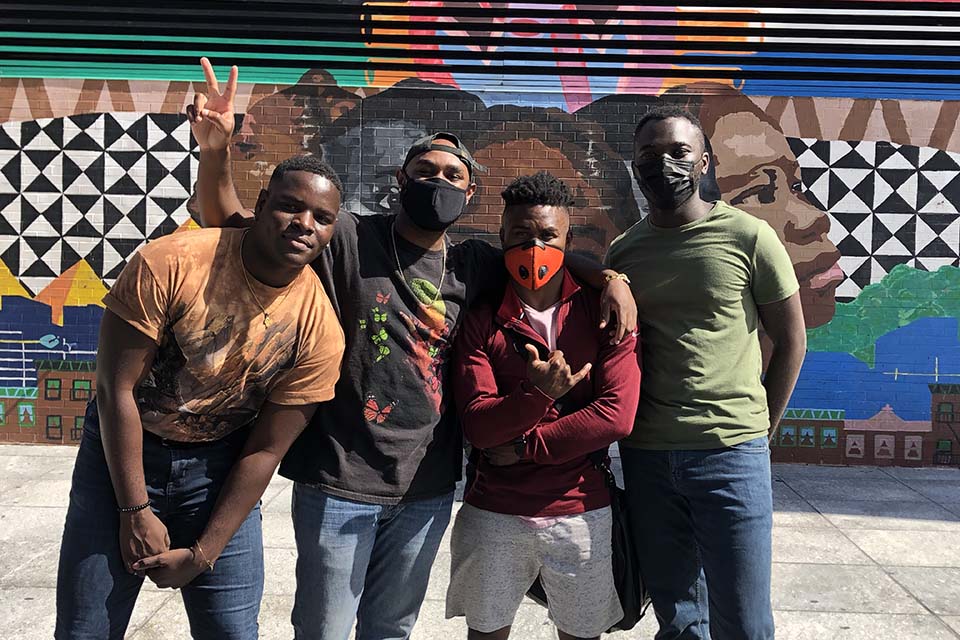 Muhammad served as the casting director for the entire series, and started the process by casting himself and two friends as the main characters, saying “I had written each main character with each actor in mind, including myself.” He first brought on Catherine Calloway (B.F.A. Drama ’18) to play Tara. Muhammad explains that he wanted two of the main characters to be a black man and a white woman, because he feels that they are close to each other in the hierarchy of privilege in American society. “White women and black men have this interesting foil with each other in that white women have white privilege and black men have male privilege,” explains Muhammad, adding that during the writing process he wanted to keep themes of racism, sexism and social justice top of mind for each episode.

After casting Calloway, Muhammad reached out to Michael Alvarado, a friend he met while attending a summer program at the Neighborhood Playhouse, for the role of Manny. Adding Alvarado to the cast not only meant working with one of his best friends, but with the addition of an Afro-Latino cast member Muhammad felt it helped make the show more authentic to the local population of Uptown Manhattan.

Following initial casting, Muhammad began reaching out to people he knew to see who would be interested in participating in the project. A main goal throughout the casting process was to focus on diversity, though that wasn’t always easy to do.“I knew I wanted a diverse cast but this is a show that by nature has ‘heroes’ and the ‘villains,’” Muhammad explains. “I didn’t want all of the villains to be people of color, so I did my best to find some sort of balance there.”

One lesson Muhammad learned throughout the casting process that he will take with him into his work as an actor was that being prepared and submitting materials on time count a lot to producers. “Obviously acting technique and ability are super important, but the other things that show that you are a good person to work with go a long way,” he says.

When it came time to gather the crew, Muhammad relied on Sojourner’s knowledge and connections within the film industry, as well as reaching out to many alumni they had both worked with while at UNCSA.

Alumni involved in "Angels of Uptown"

From page to screen

As with all film projects, budget was a top priority for Muhammad and Sojourner, as they wanted to be able to produce the series and have enough money to pay everyone involved. Muhammad turned to a lot of connections he had made at UNCSA to help their fundraising efforts, including calling former Chancellor Lindsay Bierman, who connected him with several donors, and reaching out to the Kenan Institute. Through private donations, a grant from the Kenan Institute and the use of Seed&Spark — a crowdfunding platform geared towards independent filmmakers — they were able to raise enough funds to meet their goal which came to an overall production budget of a little under $20,000.

After the pilot episode was filmed in summer 2020, additional episodes were filmed in summer 2021. While filming during the COVID-19 pandemic was not easy, the crew used a combination of guidelines from the CDC and the Screen Actors Guild to make sure they were adhering to best practices and keeping the cast and crew safe.

This was an unexpected part of my creative journey, but I am so glad that we did it and I can’t wait to see what happens next.

Looking forward to the future of the series, Muhammad hopes that people watch “Angels of Uptown” and enjoy the project that he and his co-collaborators have spent so much time and energy on. He added there is always the possibility that the series could get picked up by a network or screen at a film festival. “There’s even the potential to pitch the concept as a feature film,” adds Muhammad, “but for right now, we want people to watch this series.”

Even if there is no future for the web series beyond the first season, Muhammad is proud of what he and his team were able to accomplish. “This was an unexpected part of my creative journey,” adds Muhammad, “but I am so glad that we did it and I can’t wait to see what happens next.”