The 50th anniversary ceremony of the Hall of Fame was hosted by Joel Grey, whom Freedman directed in the 1978 Broadway musical “The Grand Tour.” Also inducted Monday were designer Bob Crowley, actors Victor Garber and Leslie Uggams, actor/playwright Anna Deveare Smith, and composer Alan Menken, who was the UNCSA commencement speaker in 2011. 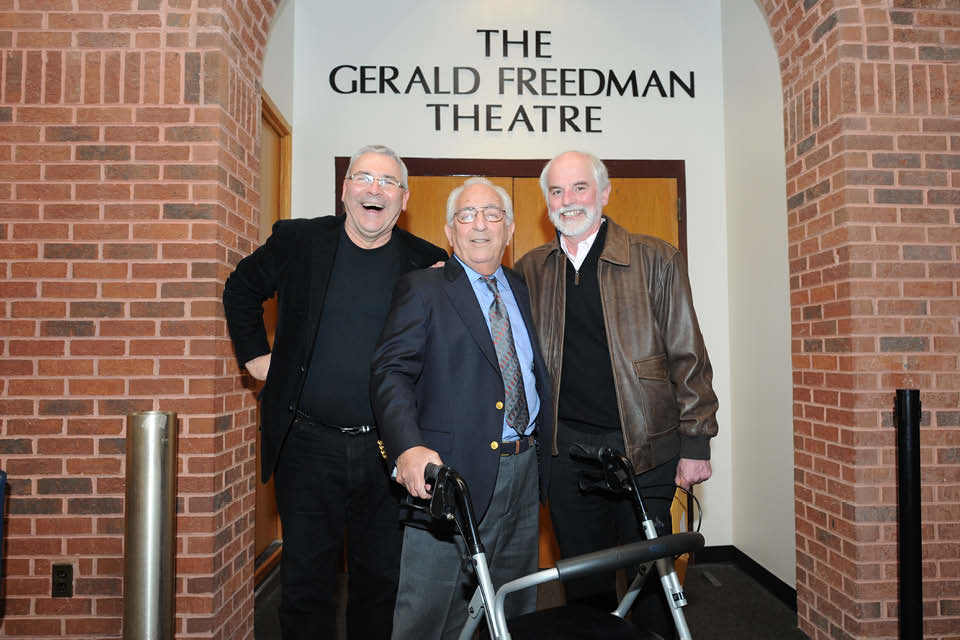 Playwright and screenwriter Alfred Uhry announced Freedman’s induction during the ceremony at Broadway’s famed Gershwin Theatre, where Freedman’s name has been inscribed in the rotunda.

Uhry, also a member of the Hall of Fame, was UNCSA commencement speaker in 1998. Announcing Freedman’s induction, he said, “Gerald did more than move actors around and make pretty stage pictures. He help performers learn to dig into their characters and find motivation for what they were doing and saying. He used his passion, intelligence and extensive knowledge of all areas of stagecraft to inform his work.

“Gerald Freedman was a natural born teacher,” Uhry continued. “He inspired literally hundreds of actors, directors, designers, writers (including me).”

Freedman’s best friend and colleague Robert Beseda said the award would have meant the world to Freedman and receiving it from Uhry would have been especially meaningful. “Gerald and Alfred, and Alfred’s wife, daughters, dog and multiple cats were among Gerald’s closest friends. They were neighbors on the Upper West Side,” Beseda said. “Gerald and Alfred first collaborated in the 1970s on a developmental workshop production of ‘The Robber Bridegroom’ for which Uhry wrote the lyrics, and later on the Broadway production starring Kevin Kline and Patti LuPone,” he added.

Beseda, who received Freedman’s Hall of Fame medallion, said “The ceremony was wonderful, dazzlingly dreamlike — mingling with show folks at the top of their profession, friends, companions, colleagues, devoted to and passionate about theater, ecstatic that shows are back up, telling stories about the old days, worried about the world today. Our ‘Gerbear’ as his students called him was one of these people and he was very present last night, highly regarded and greatly missed.”

The Theater Hall of Fame was founded in 1970 to honor lifetime achievement in the American theater by preserving its history, honoring present theater professionals, and encouraging emerging artists.

Gerald Freedman was a natural born teacher. He inspired literally hundreds of actors, directors, designers, writers (including me).

To be eligible for induction, the theater professional must have given 25 years of distinguished service to the American theater and have at least five major production credits on Broadway. More than 275 Hall of Fame members vote on the annual ballot, along with American drama critics.

Among the members of the American Theater Hall of Fame are former Winston-Salem resident Rosemary Harris, a longtime UNCSA supporter and widow of UNCSA founder John Ehle; alumnus Joe Mantello (B.F.A. Drama '84); Broadway producer Roger L. Stevens, for whom the historic Steven Center in downtown Winston-Salem is named; Agnes de Mille, for whom de Mille Theatre on the UNCSA campus is named; former Board of Visitors member William Ivey Long; Jane Alexander, a UNCSA commencement speaker; and other luminaries of American theater who have visited UNCSA as guest artists, including Helen Hayes and Ann Reinking.

During his career of six decades, Freedman collaborated with Tony Award-winning choreographer, director and producer Jerome Robbins on the groundbreaking original Broadway productions of “West Side Story” and “Gypsy.” He and Robbins co-directed the 1980 Broadway revival of “West Side Story.” In addition to “The Robber Bridegroom” and “The Grand Tour,” other Broadway directing credits include the premiere of Arthur Miller’s “The Creation of the World and Other Business” and Shaw’s “Mrs. Warren’s Profession” with Lynn Redgrave and Edward Herrmann.

Freedman was artistic director of the Great Lakes Theater Festival in Cleveland, Ohio, from 1985-1997, directing productions including Shakespeare’s “King Lear” and Arthur Miller’s “Death of a Salesman,” both with Hal Holbrook.

Internationally, he directed in London’s West End, Paris, Tel Aviv, Adelaide (Australia), Istanbul, and was the first American to direct at Shakespeare’s Globe in London in 2000.

Prior to coming to UNCSA, Freedman taught at Yale University and at The Juilliard School, where his students included the late comedian and actor Robin Williams, Mandy Patinkin, and Beseda, who became his associate dean at UNCSA.