In the wake of the U.S. Supreme Court's decision to overturn Roe v. Wade, the School of Drama production of Lisa Loomer's 2016 play "Roe"—directed by guest artist Acadia Barrengos (B.F.A. Drama '22)—has taken on new relevance and provides audiences, cast, and crew with an unusually intimate view into the lives of those involved in the famous case.

When the School of Drama started planning its 2022-2023 season in September 2021, the play selection committee anticipated "Roe" to be especially timely. They were proven correct when, on June 24, 2022, the U.S. Supreme Court eliminated the constitutional right to obtain an abortion—casting aside 49 years of precedent that began with Roe v. Wade.

A graduate of the UNCSA Drama Directing program, Barrengos is a freelance theater director based in Washington, D.C., working as a directing fellow at The Kennedy Center. She most recently premiered the first iteration of “mother/land,” an original work she is creating with Tess Riley. 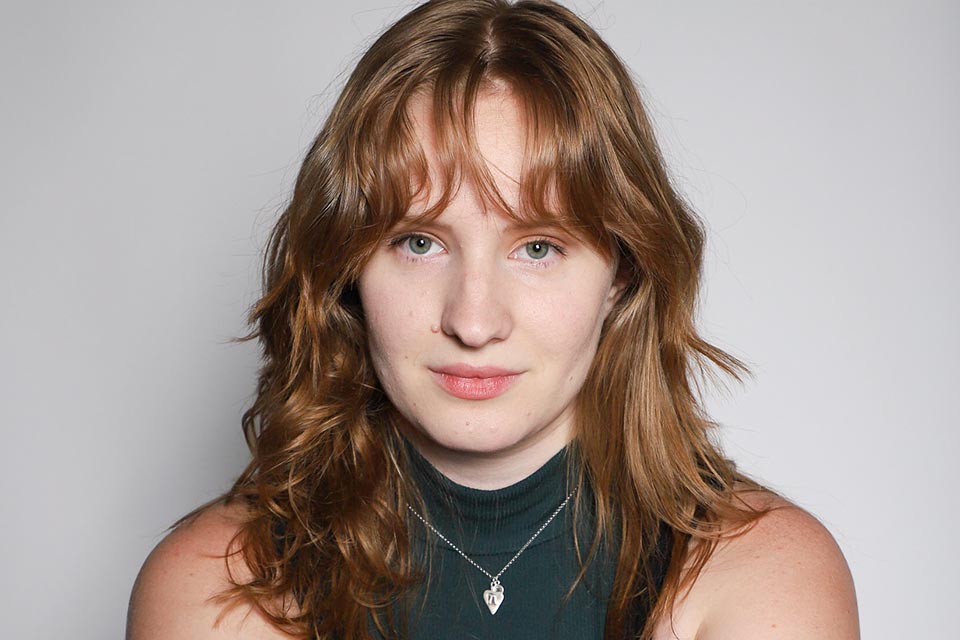 Barrengos directed “Indecent” in the UNCSA 2021-2022 season, “In the Blood” as a part of the studio series, “Keys to the Kingdom” and co-directed and created “Love and Depositions” alongside Marina Zurita and Mollye Maxner in 2021. She directed “Stupid F*cking Bird” at Gatehouse Theatre Company and has directed at the Women in Theatre Festival with Project Y Theatre.

“I’m a very young director, but I’m drawn to plays that deal with historical matters,” Barrengos says. “I didn’t find directing ‘Roe’ entirely different from a regular dramatic play, but if we wanted to expand our understanding of the characters’ lives, we could go to the historical record.”

Barrengos watched the show on its opening and closing nights and had high praises for all involved in the production—sharing that she felt "the show went extremely well" and thought "the cast and crew did a great job."

Scott Zigler, Dean of Drama, shares similar sentiments about Barrengos herself. "The director did a phenomenal job," he says, noting that the play was not only illuminating for the audience but also provided valuable teaching points for the student actors.

Like many plays, "Roe" requires actors to play multiple roles. Zigler stresses that "for actors playing more than one part, learning to distinguish one character from another and making fast costume changes is important." 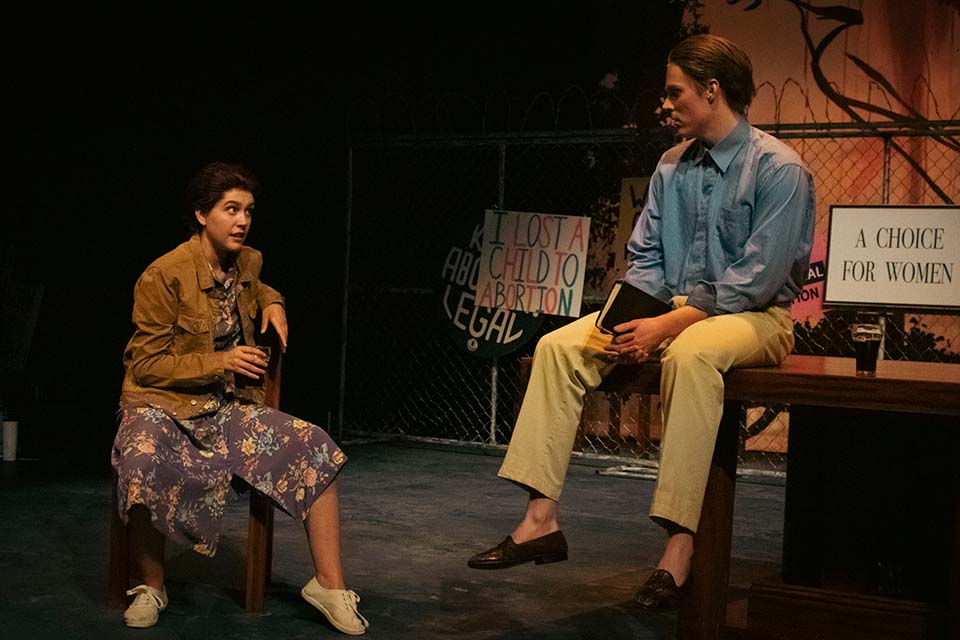 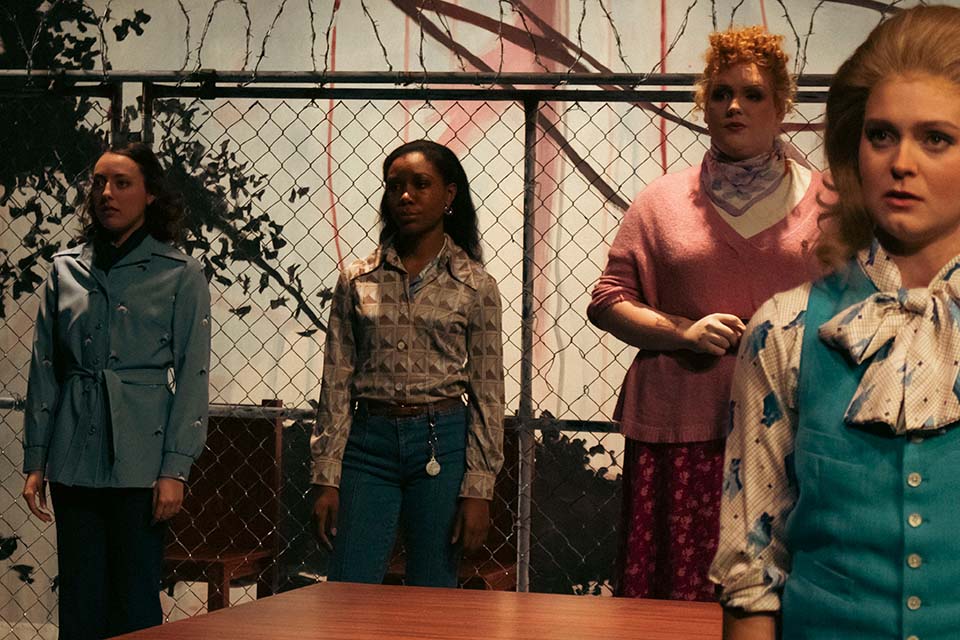 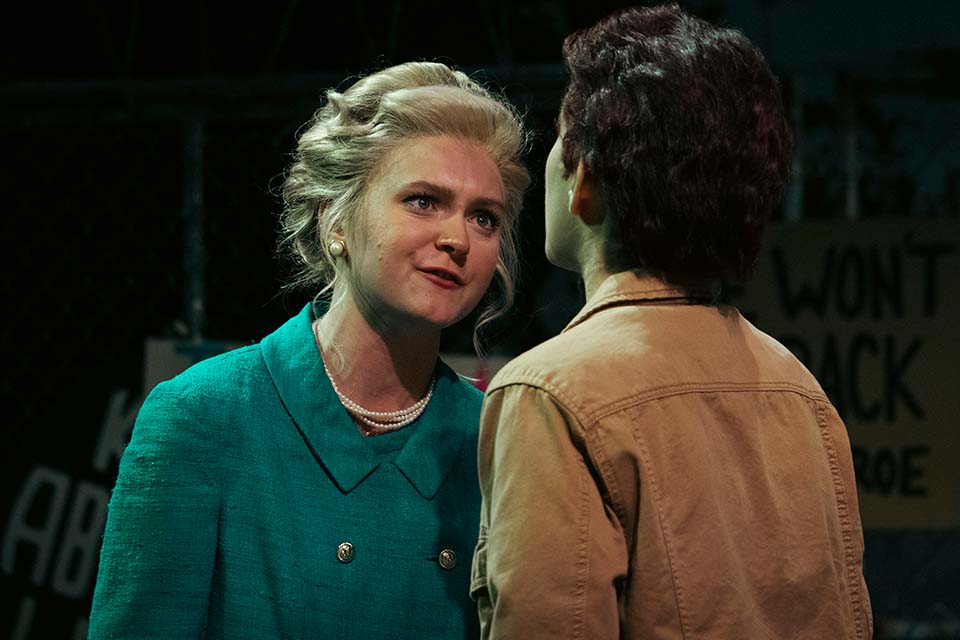 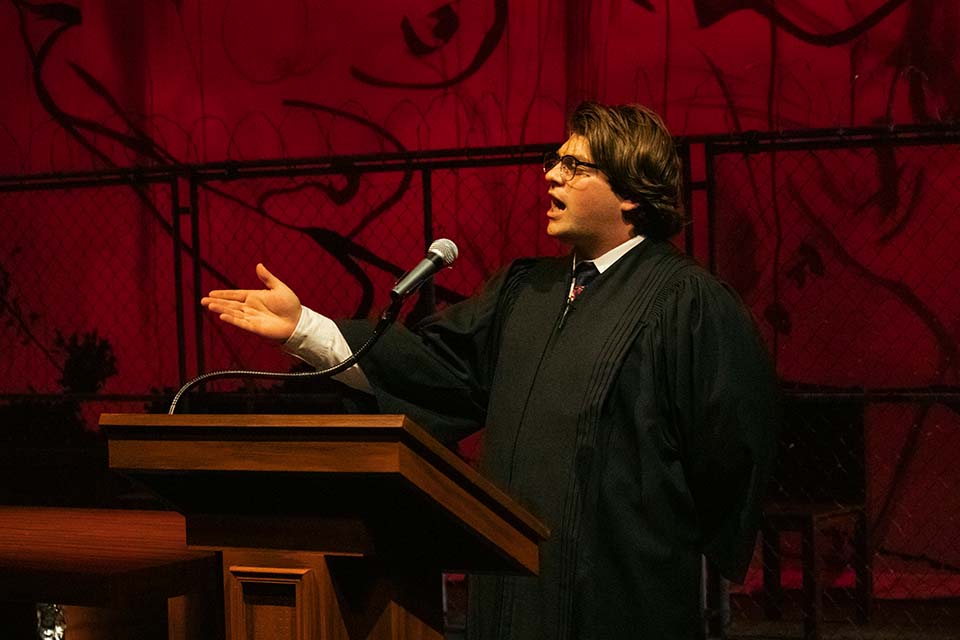 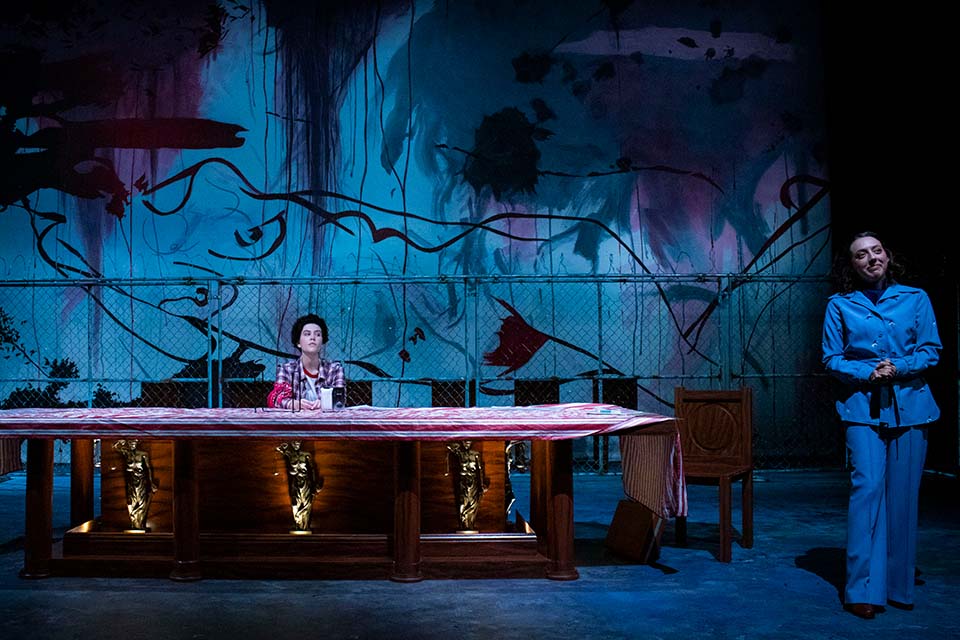 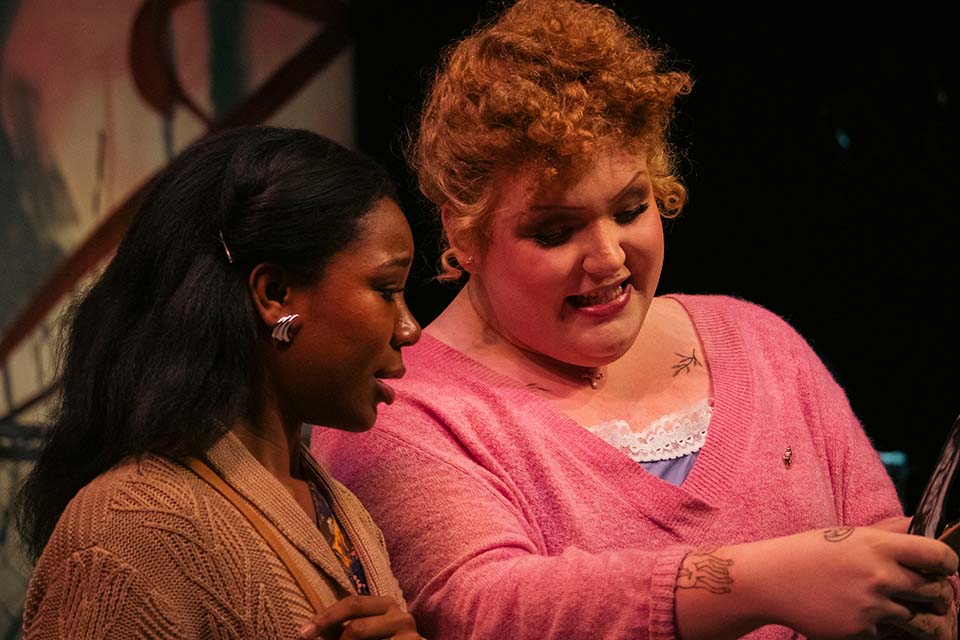 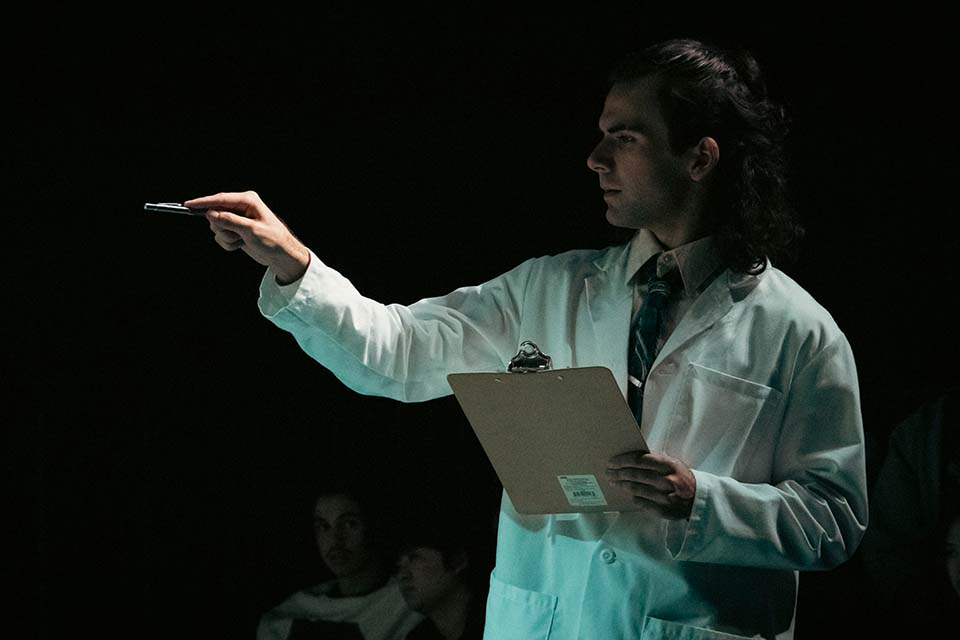 The road to “Roe”

In 1969, Norma McCorvey—a Texas woman in her early 20s and the real name of "Jane Roe" in the case—was trying to terminate an unwanted pregnancy, her third. At the time, abortion was legal in Texas only to save a woman's life.

While American women with the financial means could terminate pregnancies by traveling to countries where the procedure was safe and legal or paying hefty fees to U.S. doctors willing to perform abortions secretly, such options were out of reach for McCorvey and many other women. This reality resulted in many women resorting to illegal, dangerous, "back-alley" abortions or self-induced abortions.

After trying unsuccessfully to get an illegal abortion, McCorvey was referred to Texas attorneys Linda Coffee and Sarah Weddington, who were interested in challenging anti-abortion laws.

The lawyer Sarah Weddington, played by Ruby Westoff, and the plaintiff McCorvey, aka Roe, played by Gianna Hoffman, were not natural allies. The two women were divided by class, gender identity, and various sometimes-funny, sometimes-tragic lifestyle choices.

Westoff, who plays Weddington—the lead lawyer in the case—shares that she used the play as an educational opportunity. When she landed the role, Westoff admittedly didn't know much about the history of Roe v. Wade and says how, through the play, she "learned about how the case came to be and how it's turned into the right-left heated debate it is now."

Additionally, Westoff researched Weddington herself, which provided invaluable insight that helped her embody Weddington on stage.

"I looked at Sarah a lot in photos and videos. I looked for hand gestures and things I would read on stage," Westoff says. "I tried to aim for the essence of who she was and make her believable to the audience." She also read Westoff's book ('A Question of Choice'), which is highly detailed and not an easy read. The book illuminated "a woman who was Type A. She had a high need for control."

Despite the differences between herself and Westoff, Westoff felt admiration for and even kinship with Weddington.

Weddington was from Texas, and while Westoff is from New York, she has family from Georgia, which helped her connect with and embody Weddington on stage down to the "very Southern way of being and speaking," she says.

I was very excited when I got cast because it's such a great role.

Further, Westoff notes that, as a woman, she has experienced prejudice in the theater and "for Weddington, as one of the very few women in law at the time, to achieve the success she did at such a young age was an insane and inspiring accomplishment." Weddington was 26 when she tried Roe v. Wade in front of the Supreme Court.

Like Westoff, Hoffman—a fourth-year acting student from Oklahoma City, Oklahoma—got to flex her acting muscles in the role of McCorvey, a highly contradictory and controversial character.

"I was very excited when I got cast because it's such a great role," Hoffman says. "And being a queer, pro-choice woman from a Red state, I think Norma is fascinating."

"As a person, she was very unpredictable," Hoffman says. "She switched around so much in her ideologies throughout the years that it was hard to tell when she was being exploited and when she was telling the truth." A documentary about her included a deathbed confession where she said she was bought out by the Christian church where she was baptized.

Westoff and Hoffman talk about how their characters described certain events in their respective books.

"There are several stories Norma told throughout her life that she had different takes on at different times," Hoffman says. "Ruby read Sarah's book, and we compared notes on how each of them told the same story in different ways." McCorvey wrote "I Am Roe" and "Won By Love."

McCorvey had a difficult life. Abandoned by her father and abused by her mother, she was plagued for a time by criminal behavior and drug and alcohol abuse.

"The whole second act was such a wild ride," Hoffman says. "At her core, Norma just wanted to be loved so badly. … After she came out as gay to her mother, Mary, her mother had her sign her rights to her child over to her mother to put on her boyfriend's health insurance." After that incident that McCorvey began seeking to terminate her third pregnancy.

McCorvey eventually forged a relationship with Connie Gonzalez, who gave her the unconditional love she craved, but McCorvey did not maintain the relationship.

Hoffman expresses how she believes "one of the most tragic moments is after Norma's baptism, and she and Connie have their scene. Connie asks, 'Are you going to give me up?'"

“Roe,” today and beyond

The play tackles tough topics that might be disturbing for some, as evidenced by the content warning note on the entryway to the rehearsal space in the Performance Place. The list included "homophobia," "strong derogatory language," "themes of child abuse," "graphic descriptions of abortion stories," and "hateful language about religion," to name a few. 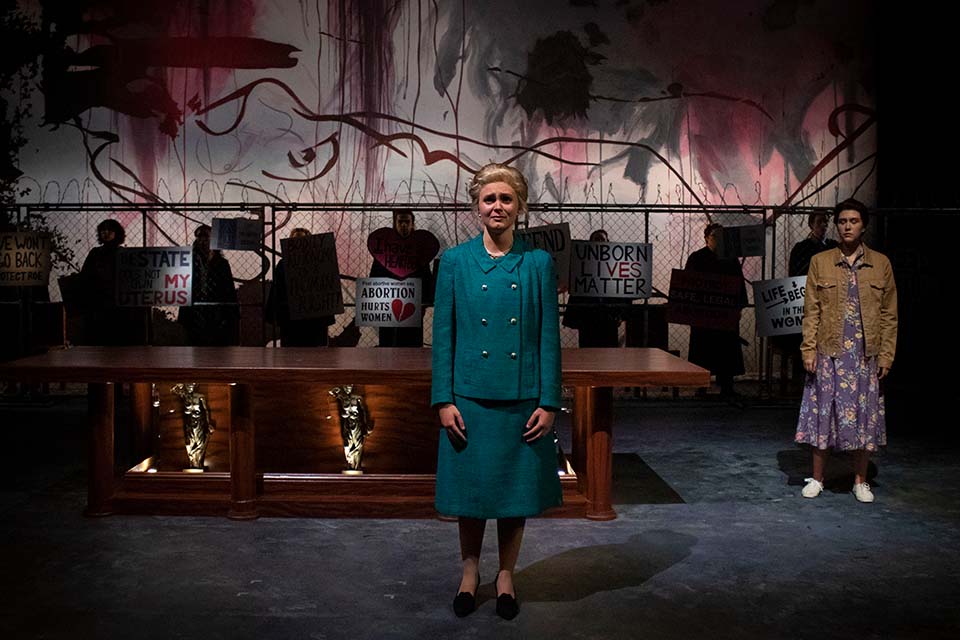 "In this play, there are a lot of graphic descriptions. If technicians are coming in to watch rehearsal and haven't read the play, we can use content warnings to let them know what's coming," Zigler says. "We think of it as a courtesy. We don't want anybody to feel ambushed. I don't see using content warnings as a threat to academic freedom."

While emphasizing the 1970s and '80s, "Roe" also extends into the present day. "The play's tone has intrinsically shifted since it was originally written," Barrengos says. "Originally, the tone felt final, but now, it feels much more loaded. In this particular production, the subject matter is so fresh in the culture now that we wanted to let people know what they were in for when they walked into the room."

But, while "Roe" doesn't shy away from the graphic nature of its subject, it also contains much humor. After all, the Oregon Shakespeare Festival originally commissioned "Roe" from Lisa Loomer, who began her career as a comedian.

"One of the things I appreciated is how much humor was in the play," Hoffman said. Barrengos echos Hoffman's sentiment—emphasizing how "Loomer did not want to write a courtroom drama," which made it not feel really "strict."