The show may be over, but for the artists involved with the UNCSA production of "Love and Depositions," the performance was in many ways more of a beginning. The devised play, staged in an outdoor lot on the UNCSA campus, was the culmination of a months-long creative process between its three directors, cast and a host of crew members from the School of Design & Production.

Conceived and co-directed by School of Drama directing students Marina Zurita and Acadia Barrengos with faculty member Mollye Maxner, "Love and Depositions" was inspired by "Trojan Women," a classic work by ancient Roman playwright Seneca. The play narrates the aftermath of the Trojan War and the unmerciful fates of the women and children of Troy. The central figure in "Love and Depositions" is a teenage girl of Asian descent (played by Isabelle Bushue) obsessed with Greek mythology and incessantly searching for the character and voice of Polyxena, who was given no lines in Seneca's work. 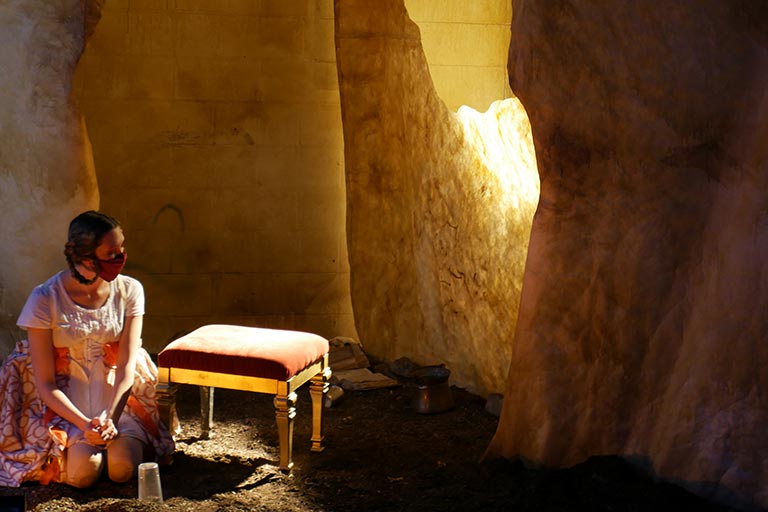 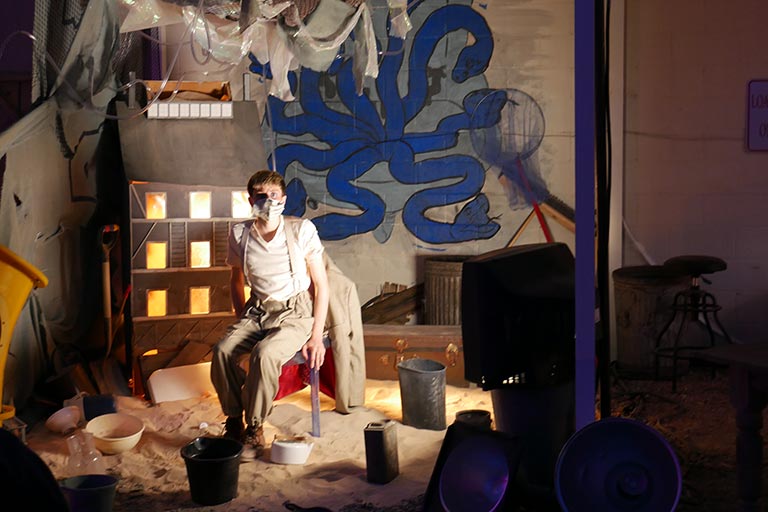 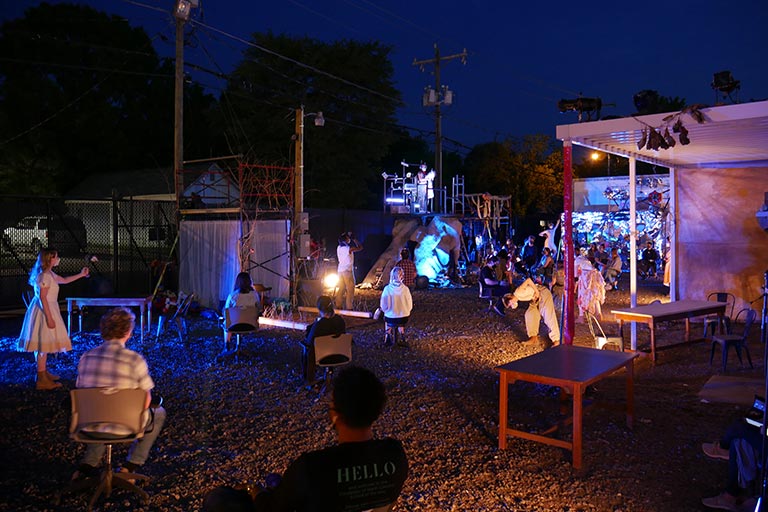 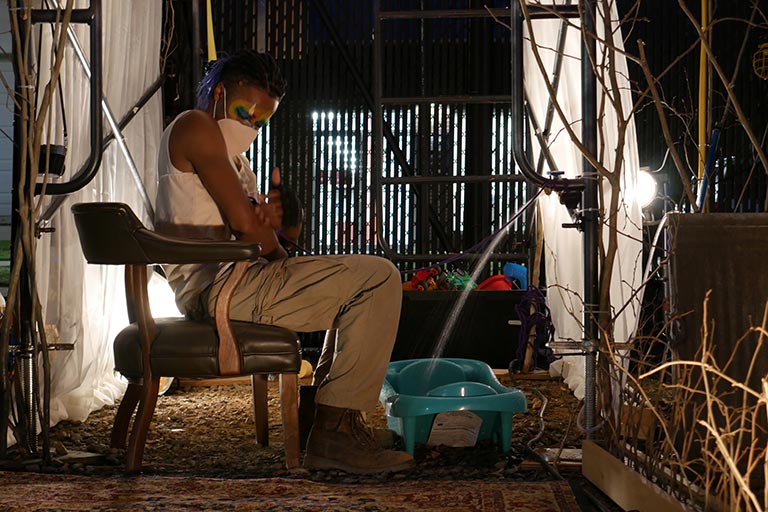 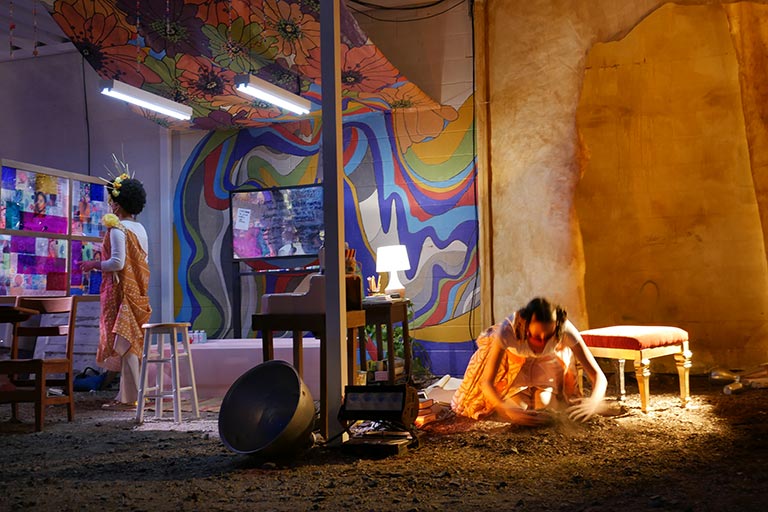 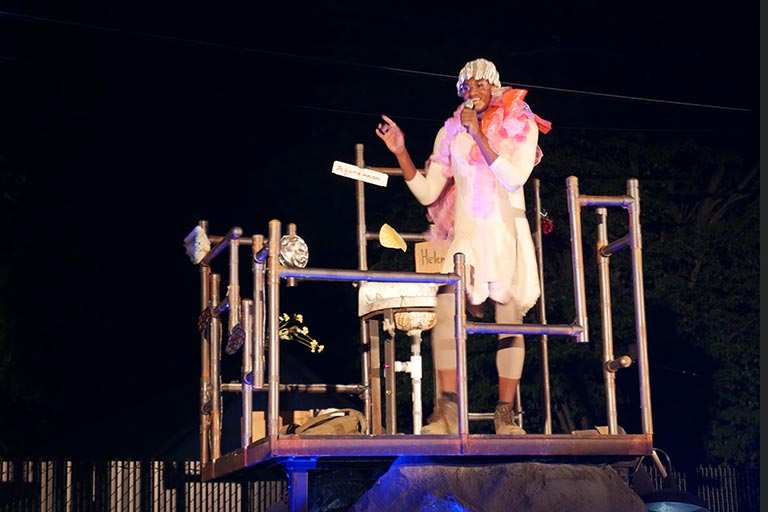 The production was elaborate, featuring monologues from eight different characters happening simultaneously (each within their own self-contained space or "pod") before turning to its central character for a 21-minute monologue and ending in a rock musical. Small groups of audience members viewed a single actor during the individual monologues, and listened through earbuds. A chorus moved throughout the venue at various times and a sound score also filled the space.

A complex feat at any time, the devised production faced additional challenges (and opportunities) from the COVID-19 pandemic and social distancing requirements. In some ways, those challenges are what made the show, as it was originally planned for an indoor venue in a much different form. To pull off the show, cast and crew worked together in a highly collaborative atmosphere to bring the piece to life.

From conversation to concept

The planning for the mainstage production that eventually became "Love and Depositions" began well over a year in advance. "In the first stages, more so than deciding on the play, our conversations were about what it means to be a director and breaking the hierarchy," Zurita says.

The three directors were also interested in exploring gender and identity and expanding the kinds of roles available to female, transgender and non-binary actors. "If a person is only cast in certain roles," Barrengos says, "then that's how they're represented as an actor." They wanted to move beyond those traditional roles.

"We were looking for a play that had space to be questioned," Zurita adds.

With those conversations in mind, they began looking for pieces that would let them explore those ideas while sharing the work of directing amongst themselves — two student directors and a veteran of the stage. When they couldn't find a piece that met their criteria, they decided to create one. "Trojan Women" gave them a starting point.

Creating a world that lives on

Zurita and Barrengos worked with several actors one-on-one while Maxner oversaw the big picture as faculty for more than 60 cast and crew members. Those experiences led to meaningful work and the creation of characters and a world that has outlived the initial performances.

"I had a really big breakthrough in my acting work and I don’t think it would have happened had I not done 'Love and Depositions,'" says actor Isabelle Bushue. "After having built the show, it was so in my body that by the time we did the run, with so much guidance from Mollye Maxner and Robin Christian-McNair (our voice coach), I was finally able to let go and make new and incredibly exciting discoveries. Each performance was different and alive and terrifying and exciting, and it was just an enormous thing for me."

When you make something, it's yours and you're so connected to it. It sparks this want to make more.

Several of the actors are actively working on pieces that continue the stories of the characters they brought to life. "When you make something, it's yours and you're so connected to it," Zurita says. "It sparks this want to make more."

Barrengos agrees. "People use their own DNA in the characters," she says. And the experiences the actors had in helping create those characters have carried over into their other work.

"We were the directors, but the creation was by everyone, this container was filled by everyone," Zurita says.

That container included the work of a multitude of designers and production crew. Like the directors, Scenic Designers Melissa Smith and Erin Morales, both 2021 graduates, coordinated many moving parts. In addition to leading the overall scenic design, they each also designed two of the actors' pods, with artists Abel Brone-Hammer, Pablo Gonzalez, Carew Henry and Jules Lightbeam Magnus working on the remaining pods. 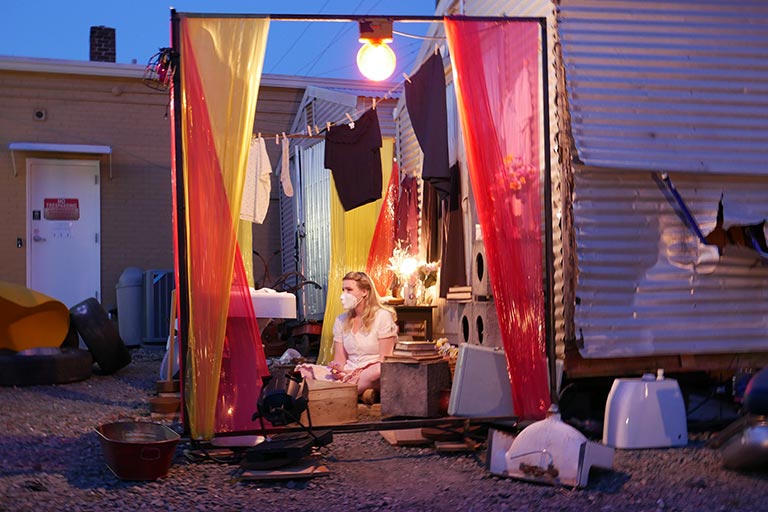 Morales and Smith, along with four other artists, designed individual actors' pods for "Love and Depositions."

"There were a lot of 'first time' things with this production," Morales says. "It was devised, it was outdoors, it was during COVID." The COVID restrictions, by far, added the biggest challenge. Among the many venue changes and spacing requirements, rehearsals were restricted and the actors and crew typically could not share the same space at the same time, meaning time had to be carefully planned and managed.

"Certain aspects had to be locked in before rehearsals," Smith adds, "to create a cohesive artistic language." But many things remained fluid long after the timeline of a "typical" scripted production in a theater.

And yet, the production wouldn't have existed in its final form if not for some of those restrictions — and, Morales adds, "a brilliant working together of everyone involved with the show."

That working together and delegation of specific elements to individual designers led to an extraordinary opening night. "Walking through the first night and finally getting a chance to see it all together was really magical," Smith says. Seeing the ways the aesthetics of the individual designers naturally overlapped and mirrored each other was impressive, she adds.

In addition to the atmosphere of collaboration and cohesiveness experienced by the designers was a sense of trust that was perhaps one of the biggest takeaways. "We learned to trust the people we were working with," Smith says. "There's no way one person could possibly know or do all of it."

Moon worked with the directors and designers on initial conversations about the role of lighting in the show, with Stiehl-Guerra managing all of the moving parts and paperwork elements of the design. McClary and Marcus helped turn the designs into reality. 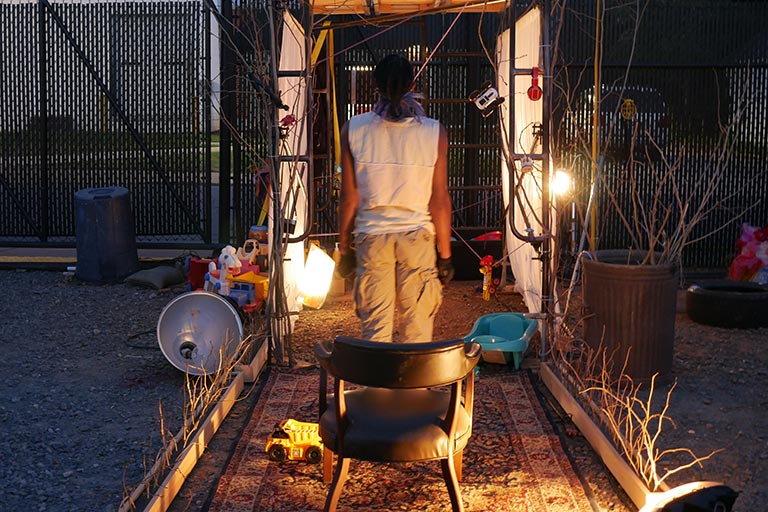 The lighting team aimed to use unconventional light sources throughout "Love and Depositions."

And being in an outdoor, open space called for a completely different process than what the team typically experiences in a theater. “Weather and location played a huge role in how the lighting team approached this show," McClary says. "In a normal theater there are typically standard lighting 'positions,' but in a found space it is up to the lighting team to create these positions using existing architecture on the site or making our own."

In this case, that "make your own" approach also involved the use of unexpected elements throughout. "Something unusual that we encountered during this show was using as few 'conventional' lighting instruments as possible," Stiehl-Guerra says. "We lit the show with objects such as car headlights, table lamps, neon signs and more. It was exciting to play around with so many different objects and learn how they could transform our space.”

For Marcus, the unconventional aligned with his first big assignment as an electrician at UNCSA.  “I loved most the variety that this show's lighting needs incorporated," he says. "We even hung up a real streetlight on the set. I learned a great deal about how to adapt to a show's needs, especially with so many artists working on this show. I had a blast and I got to work with some amazing people. Most importantly, I learned that if you truly believe something is waterproof, it most definitely isn’t.”

The devised element played a critical role in the collaboration and creativity throughout the process. “We probably didn’t have a complete script until a couple days before we opened the show," Moon says. "This, in some ways, was freeing. It allowed for me and, I think, the entire team to be more creative in how we thought we should tell this story and what it should look like.

Overall, this was a much more collaborative process, but I think what made it unique was that we were able to connect the design and creative elements of the show in a deeper way since we were all coming up with it at the same time.

"Overall, this was a much more collaborative process, but I think what made it unique was that we were able to connect the design and creative elements of the show in a deeper way since we were all coming up with it at the same time.”

In the show's performance program, the directors acknowledge the overwhelming collaboration that brought "Love and Depositions" into being: "This piece was made by over 63 people. … Every bit of text, every bit of choreography, every bit of music, light, sound and visual design was created by the team.

"Starting over a year ago, the three of us did many months of imagining. … And what emerged is something beyond what we could have imagined. Just as it should be."