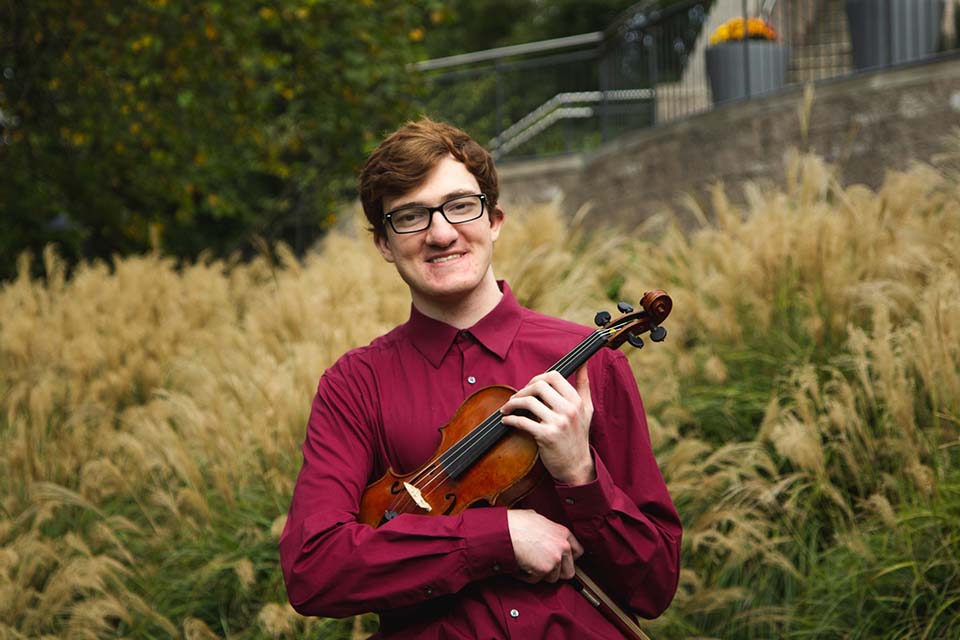 Nathan Thomeer is a violinist from Buffalo, NY. He began studying violin at the age of three. Nathan received his undergraduate degree in violin performance from Baldwin Wallace Conservatory of Music (BW) studying under Dr. Julian Ross. Currently, he is a 2nd year graduate student at the University of North Carolina School of the Arts (UNCSA) studying with Kevin Lawrence.

Nathan is a member of the UNCSA Symphony Orchestra, UNCSA Opera Orchestra and UNCSA Ballet Orchestra, which provide students with an opportunity to work with guest conductors from around the world. This past year he played under Karen Ni Bhroin, Robert Franz, Thomas Wilkens, Jiannan Cheng, Jamie Allbritten and Michael Butterman. Nathan was the Associate Concertmaster for the UNCSA Opera Orchestra this past year performing Linda di Chamounix by Gaetano Donizetti and the modern opera Volpone by John Musto. He’s also subbed in a number of regional orchestras.

At Baldwin Wallace Conservatory, Nathan was a finalist in the BW Concerto Competition during the spring of 2020 where he performed Tchaikovsky’s Violin Concerto. He was also a member of the Baldwin Wallace Symphony Orchestra, led by Dr. Soo Han.

Nathan has had masterclasses with violinists of the Cleveland Orchestra such as Stephen Rose, Takako Masame and Miho Hashizume. He has also had the opportunity to work with Noah Bendix-Balgley, Soovin Kim, Eric Wong and Dr. Penny Kruse. As a chamber musician Nathan has attended Green Mountain Chamber Music Festival, Kinhaven Music School, and Luzerne Music Center.

At UNCSA, Nathan is a member of ArtistCorps, a program that provides arts instruction, integration and exposure to school-aged children and seniors in the Winston-Salem community. ArtistCorps serves at a variety of settings including Title I Schools, Head Start programs, and community organizations. In ArtistCorps, Nathan has been teaching violin to middle schoolers and high schoolers around the Winston Salem community. He is looking forward to returning for the upcoming 2022-23 school year!