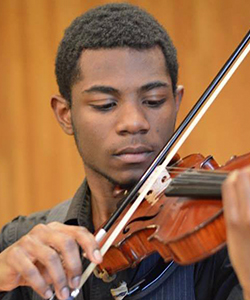 Quashawn Chadwick served in UNCSA’s ArtistCorps program from 2015 to 2018, while he was finishing graduate studies at UNCSA and beginning his doctorate at UNCG. We caught up with Quashawn earlier this month to see how things are going.

What made you decide to serve in ArtistCorps?

My professor at the time, Ida Beiler, sent me an email containing all the information about ArtistCorps. It came with a message from Rebecca Nussbaum, the ArtistCorps Director, and information about what we would be doing and I really liked the cause. I was thinking about finding ways of being a part of my community and helping people. ArtistCorps seemed like a good opportunity to get started.

Tell us about a moment from your service that really stands out to you.

At both Diggs-Latham and Old Town Elementary, there were these little boys. There was a lot of pressure on them at some point—maybe they were giving a concert, or maybe we were playing a game as a team. I remember the pressure being so much for them that they just started crying, then everyone in the class came together and tried to help them feel better about the fact and told them that it’s okay for them to be a little scared.

How did that moment or other moments shape your perception of service or of the communities that you were serving?

I never felt as personally involved with this community until I started with ArtistCorps. Now it feels like I have some stake in this community and what happens to it, and that’s a good feeling. I don’t think I ever really loved Winston-Salem as much as I did when I realized that I knew the people here and I wanted them to succeed.

What was your biggest takeaway from serving in ArtistCorps?

That there’s a lot of stuff that needs to happen, and that there are a lot of opinions going around about who certain groups of people are. There’s nothing that can shape those opinions better than actually meeting those people. There’s a lot of people who need a lot of help and we absolutely should do something about it.

How has ArtistCorps influenced your life and work since you left service?

I changed my career prospects. I decided to leave music and go into medicine. In fact, specifically, getting involved with child psychology and child psychiatry is the end goal.

What specifically prompted your career change?

I was getting my doctorate at UNCG in music, and having a lot of cognitive dissonance. I had a lot of time to think about what I was doing. I was taking courses at the time about the science of the brain at all stages, and how music could possibly affect it. They were really about the science of the brain more than the music and I realized that I was more interested in those aspects of the courses and those aspects of the field. I really wanted to be a part of that research and so I started asking around.

I’d always had an interest in the sciences but I never got to express it. The sciences gave me the opportunity to just look at the world as it is and establish what’s going on. I think that’s really, really important.

I was about to give a recital and it was a good way of feeling like I was wrapping things up. I went on a little trip and thought about it a lot and I started studying up on things and it was actually really nice. And I haven’t regretted it.

What are you up to now and what’s next for you?

I work at a level III* facility with boys who have oppositional defiance disorders and other disorders. I keep them safe from themselves, and from hurting each other, and I take care of their environment. I try to keep it really low stress and deescalate them when they’re having episodes.

In my other position, I work with the Autism Society of North Carolina. I’m like a personal assistant; my client has autism. I always say I’m like his Jiminy Cricket, if you’ve ever seen “Pinocchio.” I’m just there whispering in his ear, “Maybe we should be doing this instead of that,” or “Maybe that’s not the best way to talk to people.” He wants to be aware of things that he might have missed and he’s really responsive.

And then I’ve been taking premed courses at UNCG. I just finished my first complete semester and so far I’m making straight A’s. I’ve completely finished my biology circuit. I have—according to the school— a general biology knowledge that will take me far and I think it’s true.

After med school what’s the trajectory?

After med school, I’d like to spend time working in a hospital for a while because I’d like to see the gambit of different psychological states that people can be in. Psychiatry is really about the medicine, the chemistry. How does this affect people? I definitely want to see that. Then, I want to be involved in a non-profit organization. Maybe one day in the future I’ll wind up starting my own non-profit organization.

*Level III residential facilities are 24-hour homes for children and youth who have a history of destroying property, running away from home, being involved in violent encounters, or exhibit behaviors that could cause them to hurt themselves or others.