Return of the Band Kids: Life Lessons and Latin Music

Brittany Thomas, a graduate of the PAC program and alumna of both undergraduate and graduate programs, has served at Carter G. Woodson School since 2016 as part of her service with ArtistCorps. Eugene Ryoo, a master’s candidate studying saxophone in the School of Music, has served there as well this academic year. Both “band kids” themselves, Brittany and Eugene have reconnected to their own experiences and have enjoyed being a part of the school’s Jazz & Latin Band programming. 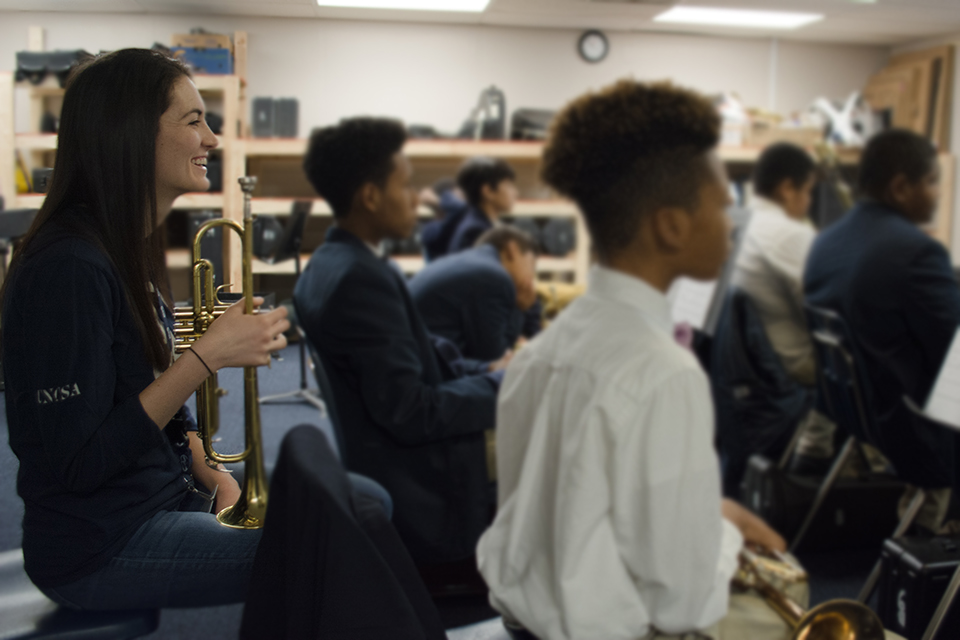 Service has been a significant part of Brittany’s development as an artist. She’s been able to learn how to apply her skills as a performer to bring valuable musical and life skills into the lives of middle schoolers.

“We learn how to perform,” she says, “but how to help someone learn music isn’t something that we’re really taught to do. We’re going to be educators, too, and realizing that and doing it frequently and getting better at it is really important.” Serving at Carter G. Woodson has given her the opportunity to hone her craft as a teacher with the same intensity she’s used to develop her skills as a performer.

“We get this question a lot: ‘Are you going to be performers or educators?’” To me, it’s inherent that if you’re a performer, you’re going to be an educator at some point.”

Brittany believes that this is a critical skill for all musicians. She also says that her service has shaped her perspective on herself and her role within her community.

“My goal now is to go into the community and build culture, serve, and bring people together through art. I’m not sure that I ever really even understood that until I was in ArtistCorps. It was just ‘I practice my instrument and go and perform it for the select people who pay to hear my concert,’ and that’s not what it is at all. I’m never going to think of myself that way again.”

Eugene, who studied music education in undergrad, says that serving at Carter G. Woodson has allowed him to build upon the skills he developed.

“My primary focus in undergrad was to be able to learn how to teach,” he says.  “So instead of performance I did education, and people gave me a lot of flak. They knew I wanted to do performance. But you can’t perform without teaching and vice versa.” For Eugene, teaching is a double-edged sword.  “I feel like I do most of my learning in terms of music when I’m teaching.”

He also credits his experiences in elementary and middle school bands with his passion for music and his desire to pursue music as a career.

“I spent a couple years in Miami and the school that I went to was one of the worst schools in the district,” he begins. “Even though the school wasn’t great, we had band programs starting in elementary school. Kids in second grade could join band. It was really neat to be able to have second graders play.” Many of his peers from those classes have continued as musicians as well. “Seeing where a lot of us in that age group ended up—I think close to 10 of us are involved in music today.”

This has led to a shift in her understanding of the relationship between teacher and student.

“You think that as a teacher you’re giving someone this secret knowledge that they don’t have,” she explains, “but really you’re just trying to pull out of them what they already have. That requires listening and asking questions to help them figure out how to be their best teachers. They have to learn how to teach themselves.”

Being in a band classroom as instructors has been a learning experience of its own, opening their eyes to the roles of classical musicians in the community.

“People always talk about how classical music is dying—and there’s a reason people say that,” Eugene observes. “Kids aren’t growing up with it.”

Brittany believes that this is a shortcoming on the part of musicians.

“We like to blame it on everyone else,” she says, “but it’s our responsibility to make these things new and fresh, and provide it in a way that people can digest and enjoy it.” And Brittany practices what she preaches. This year, she founded the student organization Grace Notes in partnership with Sunnyside Ministries. Seeing that many students didn’t have access to instruments to take home, Brittany designed a program that would repair donated instruments and let students check them out for the academic year, filling a critical need for many band and orchestra students in the area.

Middle school is a tough time for many kids, and Eugene and Brittany have had the opportunity to peer into the world of young people and see the skills and talents they bring to the table. They’ve also had opportunities to help nurture those skills and develop new ones.

“I think the biggest thing I see is resilience,” Eugene notes. “When they come to band class a lot of times, they don’t want to be here. Sometimes they want to quit halfway. I still have that thought myself every once in a while,” he laughs, “but pushing past that teaches you to fall in love with the process and to not focus on the product, but what happens in between.”

Brittany has watched newly-minted 6thgraders become almost-high schoolers in the last three years. One student in particular has developed a special bond with her.

“Kasey* is my pal,” Brittany says with a broad smile. “She was scared to play trumpet in the beginning even though she’s really good at it. Watching her gain the confidence to stand up and solo is really cool and exciting. Helping her navigate being the younger kid in class and the older kids making fun of her and her getting upset, to her being the older kid helping her notice that she has to be kind to people because she wanted other people to be kind to her has also been really rewarding.”

The ArtistCorps members contribute to students’ lives, but they say they receive just as much benefit in return.

“This service has helped me realize why I started playing music in the first place,” Eugene observes. “I don’t find music to be entertainment, but more of a service. Yeah, it’s fun to listen to music and go to concerts, but there’s also a benefit to being in a music class or even just going to a concert. There’s something that’s relieving.”

Brittany agrees that music has power beyond being fun or entertaining.

Brittany plans to take the skills she’s learned into her tenure as a William R. Kenan Jr. Fellow at Lincoln Center Education in New York City starting in July. Eugene will complete his master’s in saxophone performance next spring.

*Not the student’s real name