“We came in peace for all mankind” reads the lunar plaque for Apollo 11, the American spaceflight that first landed humans on the moon in 1969. However, the Apple TV+ series “For All Mankind” starring Krys Marshall (B.F.A. Drama) shows an alternate version of events in which the Soviet Union lands on the moon first and the Space Race never ends. In the series, Marshall plays NASA’s first Black astronaut Danielle ‘Dani’ Poole who trains and is selected as one of the first female astronauts to go to space.

During the pandemic, Marshall took her role one step further by hosting “For All Mankind: The Official Podcast,” bringing in experts and former astronauts to talk about what really goes on in space. With other credits including “Supergirl,” “This is Us,” “Shameless” and “NCIS,” Marshall has established herself as a versatile actress who consistently gives her all to projects.

We caught up with Marshall while she is filming the third season of “For All Mankind” to learn more about her experience at UNCSA and her career.

COVID-19 has undoubtedly changed your industry. How have you been staying creative over the last year?

I’m one of the lucky few who continued to work during the pandemic. My show was in production on the second season when the city shut down, so although there was some anxiety around when we would come back, we always knew that we indeed would come back. That security and certainty was everything for me. When we returned to set five months later, there was an overwhelming sense of relief and gratitude that was so present throughout the cast and crew. We’d all made it to the other side of this pretty traumatizing experience and got to come back to what we love with a renewed sense of purpose.

What drew you to the role of Danielle Poole on “For All Mankind”?

Danielle Poole actually came to me out of left field. I was at the casting director’s office, reading for a totally different show. The audition went well, and as I was headed out to the parking lot, the assistant called out to me “Hey! Do you have a second to read for this show about NASA?!” She handed me eight pages of material and told me to look it over for 10 minutes and come back in. HA!

Needless to say, I was instantly overwhelmed and underprepared. I knew there was no chance I could break down a full character, create a backstory, research the history of NASA in 1969 AND memorize the scenes in 10 mins. All I had time to do was make a handful of strong choices and just go for it. So I did! That night I found out I had the job, and two days later I was on set!

What have been your biggest takeaways from working on “For All Mankind”?

Our show is incredible: the stories, the performances, the science; I mean I get to go to outer space everyday, how crazy is that? But the thing I take away the most from this experience is the people. So often in our industry, actors at a certain level are treated like they’re disposable. So much of our work is about finding the next job, and looking a certain way or dressing a certain way or doing everything in your power to try to read the minds of producers and casting directors to figure out what they want. And as time goes on, you begin to forget what it is that YOU want or how YOU would like to tell a story. The artistry can get lost in the shuffle, as the hustle of booking work reigns supreme. 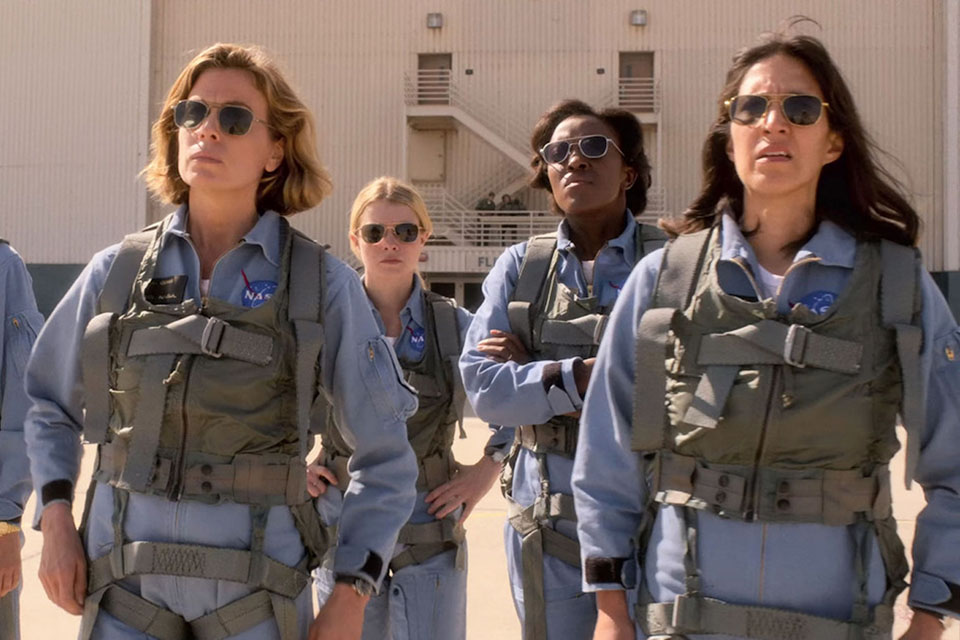 Krys Marshall, third from left, with fellow cast members Sonya Walger, Sarah Jones and Cass Buggé in "For All Mankind."

But with this show, I’ve been able to rediscover that main vein in me that does it for love. Whether it’s a scene that feels like a false note, a line I’d like to change, or an idea I have about costumes, my show’s producers and writers are so open and collaborative that I’m able to use my voice and have some agency in the story I'm telling. I no longer feel like the “actor-puppet” who’s held on strings, waiting to be told what to do. I have creative autonomy for the first time in a long time and it feels good. And my hope is that someday when this ends, I’m able to bring that sense of ownership of my artistry into the next job.

What are some challenges you've encountered in your career? How have you overcome them?

One of the biggest challenges I’ve had to overcome (and frankly am still overcoming) is the feeling of Imposter Syndrome. For so long I had this deep-rooted, limiting-belief that success came easily to others, but not to me. And each time I’d book a job, my heart would sink, wondering “When are they gonna unbook me? When will they replace me with someone better? When will they cut my scenes? When will I get fired?” And even though I’m hard working and well-trained, those boogie monsters continue to plague me from time to time. This business is filled with rejection, and it’s really tough to hold on to your sense of self and your sense of value, when so often it’s not validated in the world. The true ideal would be to hold that value within yourself, irrespective of whether you’re on a job or not. I’m still working on that one!

I auditioned for about 13 drama schools (having very little faith in my own abilities and hoping like hell to cover all my bases) and by the grace of God, I got into 11. I visited a handful and was certain that I wanted to go to school in a big city, and have this very bustling and metropolitan experience. Then I came to Winston-Salem, this tiny little town with only a handful of restaurants and one shopping mall. But there was something about the place that drew me in. I saw kids from all walks of life playing hacky sack in the Quad, I saw barefoot girls playing acoustic guitar, humming a song to themselves. I saw artists creating, flourishing and having fun. I was sold.

What advice do you have for current or prospective students?

I remember during our freshman orientation, then Assistant Dean Robert Beseda sat us all down and said flatly, “You have to want it. You have to wake up and breathe this thing, eat this thing and go to sleep with this thing in your heart. It has to be in your bones. If you don’t want it and want it bad, you’ll never make it, and you should leave now.” And he paused for a moment as we all looked around to see if anyone stood up to go. At the time, I thought his words were stern and a bit harsh, but after doing this for many years I now see exactly what he meant. No one cares if you stick with your craft. No one cares if you have success. “Making it” is not up to chance, it’s up to you. 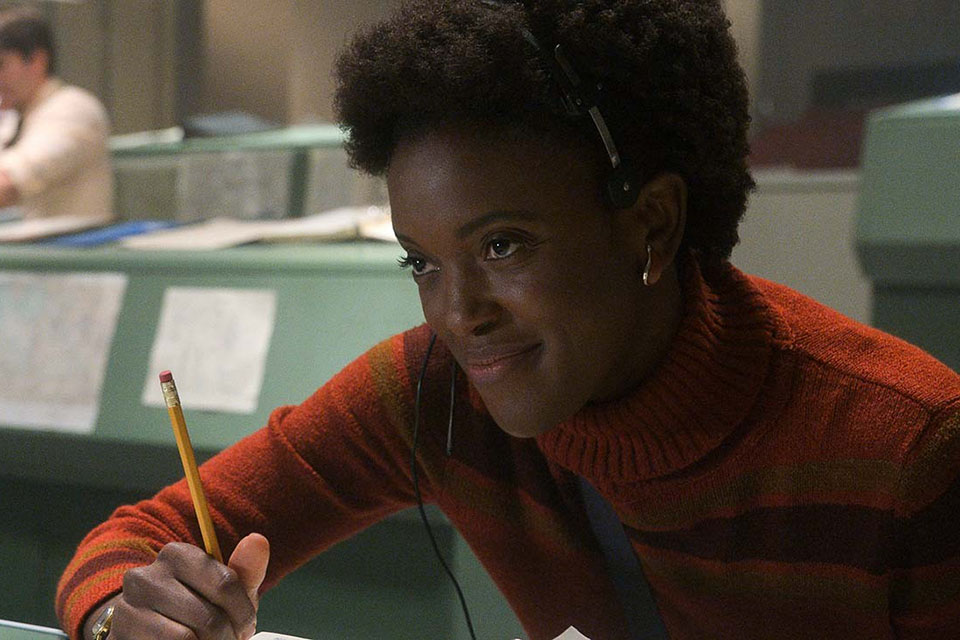 In "For All Mankind," Marshall plays Danielle 'Dani' Poole, who trains to become one of the first female astronauts.

[Former mask instructor] Bob Francesconi changed my life. During my third year I felt, like many third-year students feel, completely burned out. I was exhausted from the rigorous course load, I was tired from late night rehearsals and I was overwhelmed with the prospect of leaving in a year and being out on my own. I came into his office defeated, afraid and ready to quit. But when I told him how I felt, he didn’t judge me or reprimand me. He heard my fears, consoled me and asked me to sleep on it. Well, I did and I stayed, and I’m so glad I did.

But in school, I learned how to actually harness my talent; how to break down a script, how to build a character based on what’s on the page and how to hone performances that are consistent shot after shot... I pull those tools out of my kit everyday, using them with ease and confidence.

The foundation of what I do every day on set was created during my time at UNCSA. Before school, I was just a kid with some talent. Each performance was a roll of the dice, each show hoping like hell that something decent turned out. But in school, I learned how to actually harness my talent; how to break down a script, how to build a character based on what’s on the page and how to hone performances that are consistent shot after shot, night after night, season after season. It’s not enough to just “be good,” but you have to have a set of tangible, actionable skills to go along with it. And now, I pull those tools out of my kit everyday, using them with ease and confidence.