Drawing by Nathan Krochmal for the whitewater rafting scene in the 2015 film "Vacation." The set was built at the bottom of a quarry. / Property New Line Cinema & Warner Bros.

Nathan Krochmal is blazing a trail through the professional film world in a place that’s known to some as the “Wild West” of filmmaking. No, it’s not Los Angeles or New York – it’s Atlanta – and for the talented 2014 UNCSA graduate, it’s a land of opportunity. 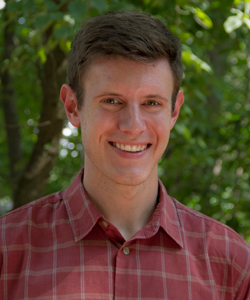 Krochmal, an alumnus of the Production Design program in the School of Filmmaking, has worked as a set designer on films such as "Vacation" and "Dirty Grandpa" and Tyler Perry’s television series "If Loving You Is Wrong."

His passion for filmmaking, though, began long before his career took off. “When I was in 8th grade, I would make backyard films instead of book reports,” Krochmal remembers. “In high school my friends and I started entering film contests, and toward the end of high school we started winning.”

It set him on the course toward a degree in filmmaking and he completed two years of a film and video production degree at a college in his home state of Michigan. As he dove deeper into the filmmaking experience, though, he realized he needed a program that was more intensive with the ability to specialize.

“My dad had a friend whose son went to UNCSA and I decided to check it out,” Krochmal says. He did check it out, applied and was accepted, transferring to the school despite the fact that he would have to begin all over again as a college freshman.

He took it all in stride, embracing the fresh start. “It helped to set a new foundation,” he says. “I really treated it kind of like a job. I came back and put the pedal to the metal.”

It was one of the things he liked best about UNCSA, the ability to test his limits. “The school gives you the chance to push yourself as hard as you want to,” Krochmal says. For him, that meant keeping busy while exploring the worlds of production design and art direction.

“I don’t know of any other school where you get that kind of hands-on training,” he says. It really hit home for him as he worked on a wintry scene for a student production, using dry ice and creating snow effects. “I think UNCSA definitely helps prepare students as well or better than other film schools out there.” 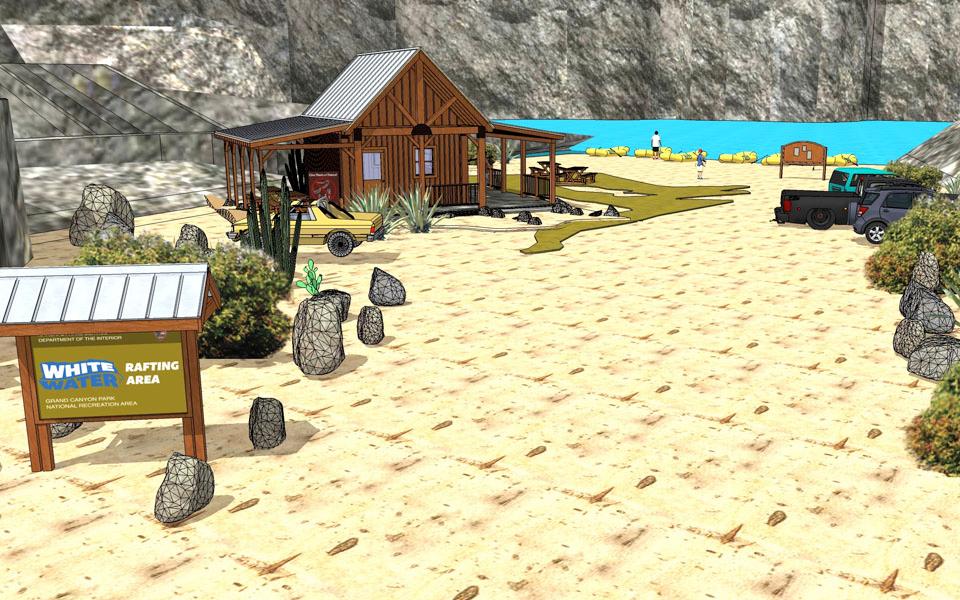 Drawing by Nathan Krochmal for the whitewater rafting scene in the 2015 film "Vacation." The set was built at the bottom of a quarry. / Property New Line Cinema & Warner Bros. 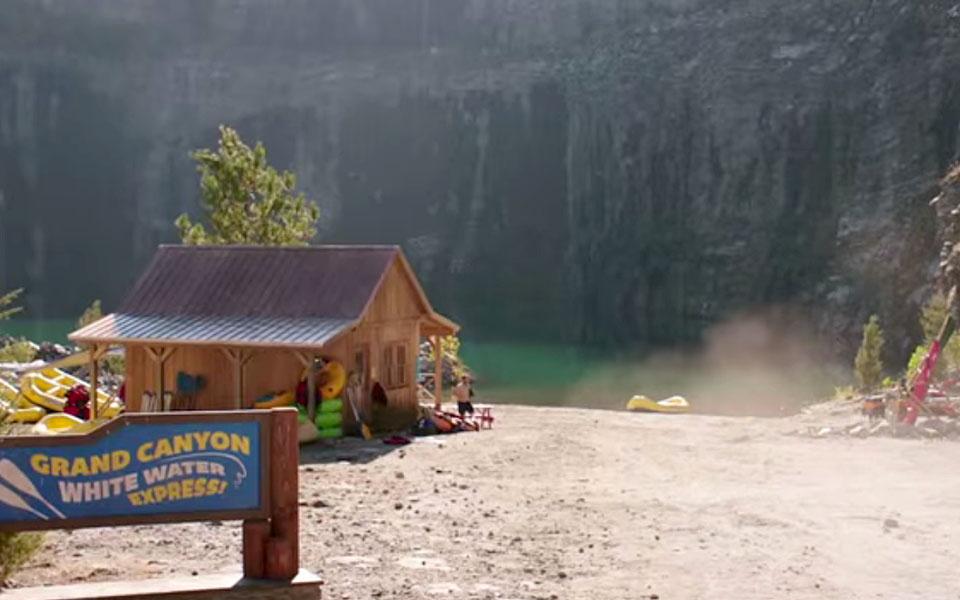 The whitewater rafting complex brought to life in the 2015 film "Vacation." 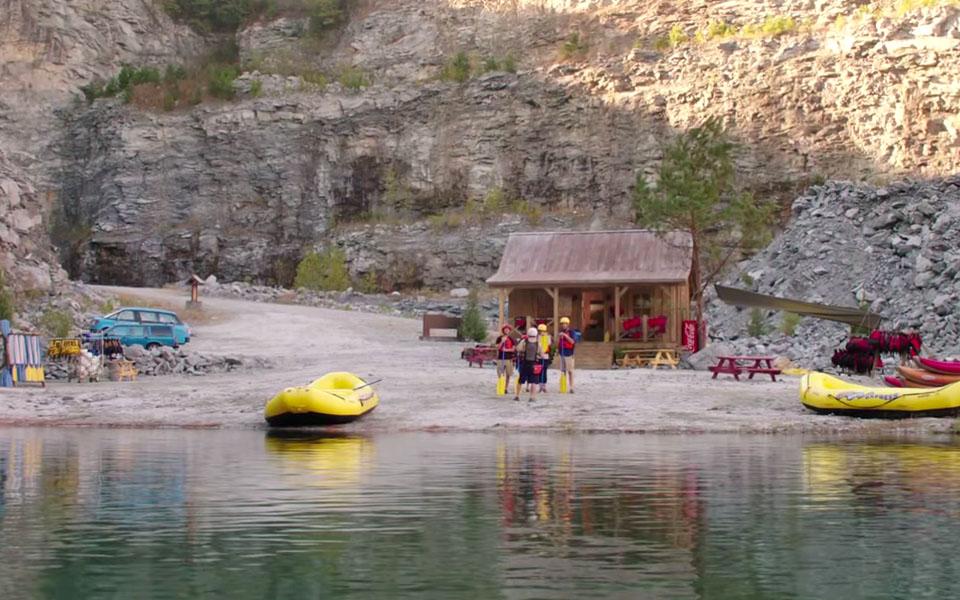 The cast of the 2015 film "Vacation" in the whitewater rafting scene. 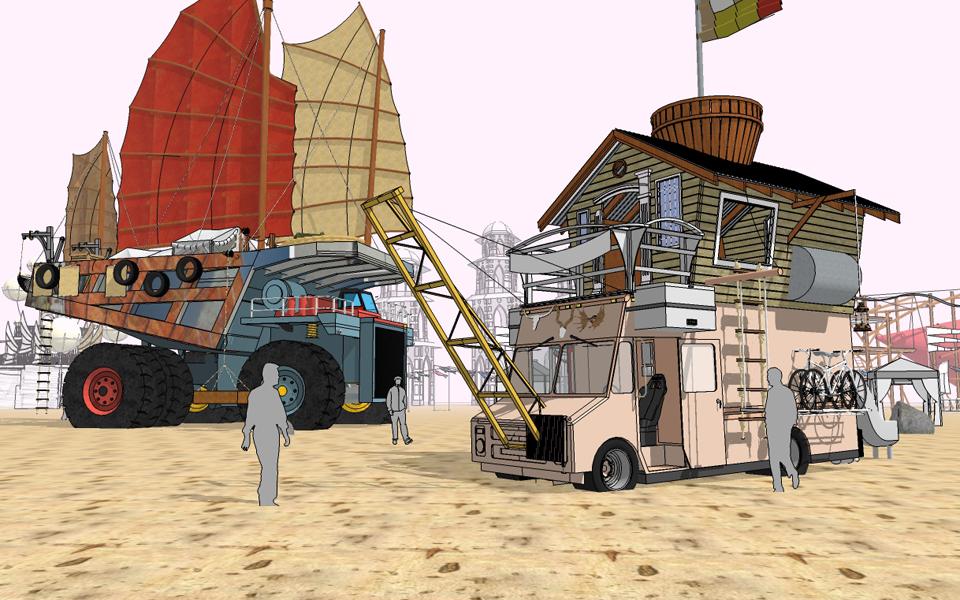 A drawing by Nathan Krochmal of DesertFest for the 2015 film "Vacation." DesertFest didn't make the cut of the final film. The crew did build the structures, augmenting onto some existing vehicles and building others. / Property of New Line Cinema & Warner Bros.

While coming to UNCSA as a freshman meant Krochmal could essentially restart his college career, it also meant he would have to get creative in funding his studies. Fortunately for him, Dolores Watson in the School of Filmmaking was willing to help.

“She helped me find several small film scholarships,” Krochmal says, “and any amount helps tremendously. It really played a huge role in helping me pay for school.” Especially in his junior and senior years, when the budget got tight. Even working multiple jobs, the scholarship funds made all the difference when it came to buying groceries and paying rent.

I had to figure out how to make it all work,” he adds, “but you have to fight for what you want. UNCSA is an amazing school.” For him, it was worth the fight and all of the hard work.

Even before his move to Atlanta, that hard work started paying off for him. In his last semester he got one final push from faculty members like Mary Ann Zotto, Carol Wood and Burton Rencher, encouraging him to apply for the Art Directors Guild (ADG) Production Apprentice Training Program. Not only was he one of just two people selected for the apprenticeship, he was also the first undergraduate to receive the honor.

He’s working toward completing that apprenticeship soon and applying to become recognized as an assistant art director by ADG. His recent film work includes set design that can be seen in the upcoming "Guardians of the Galaxy 2" and "Live By Night," directed by and starring Ben Affleck. He also worked as production designer for "Shifting Gears," a film about dirt track racing where he really got to flex his creative muscle.

“As production designer, I was in charge of what was featured on screen, which meant building physical sets, designing graphics and working with department heads to formulate the aesthetics of the film,” Krochmal says. “I had an amazing team to collaborate with, most of whom were alumni of UNCSA. Together we worked to develop the world within the film.”

But of all the film and television work he’s done in the past two years, it’s the people he’s met that have been the highlight of his brief but busy career. People like Jess Gonchor, the Coen Brothers’ go-to production designer, and Scott Chambliss, production designer for films like "Guardians of the Galaxy 2."

He still stays in touch with many of his peers at UNCSA and hopes to visit campus in the near future to share his knowledge with students about the professional film world and the possibilities that exist in the “Wild West.”

“Atlanta is just different,” he says. “There is a lot of film work coming here and a lot of features being made here. It’s very good for getting into the film industry and there is a lot of opportunity.”

For Krochmal, his decision to saddle up and head out west (well, south and slightly west) has proven just that.