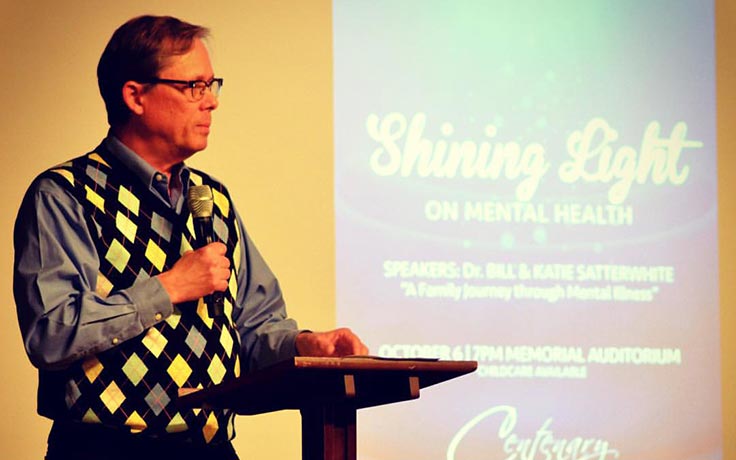 He works with groups teaching deescalation training and overviews of different mental health disorders, mainly those including psychosis. He went to undergraduate college at East Carolina University and then decided later to get a master's degree in counseling from UNCG. He decided mental health and disability reform was his calling in the summer of 1986 after a personal experience giving a tour to a student with spina bifida while working a part time job at The University of North Carolina at Greensboro.

Andy Hagler of Forsyth Mental Health Association was not always interested in counseling or mental health. In fact, his undergraduate degree at East Carolina University was in education. In an interview, Hagler said some of the beginnings of his career going into mental health was his second year as a public school teacher. "I had a student who was in what was called the Willie M. program (a program for violent or disturbed children)." Hagler also mentioned how unsettling he thought it was that for most mental health cases in North Carolina to get moving, that a lawsuit had to take place.

"What was something that really pushed you in the direction of counseling?"

"I was getting into my mid 20's at the time and I felt like that was something I wanted to do, and the interesting thing is that at that time, I was living in the Eastern part of North Carolina and my parents were living in Burlington, and actually ironically it was somewhere around this time of the year (Easter, passover) and I was home with my parents in Burlington. And so I had been thinking about going to school and I had been thinking about going to graduate school and had looked in some of the graduate catalogs at UNCG and thought that would be a cool little school to go, . . . I spoke with a career planner about counseling but I didn't want to go into school counseling. She talked about how the counseling program at UNCG was accredited. So that's kind of what motivated me to pick up a career in counseling."

Today, Andy Hagler works at The Mental Health Association of Forsyth County and works with the mental health court. Mental health courts are courts that bring offenders, who would usually go to some sort of prison instead of getting community-based treatment. They rely primarily on things such as individualized treatment plans, mental health assessments and a steady judicial monitoring to address offenses related to the psychiatrically ill. Most of the time, these courts are for smaller offenses and anyone involved must give an approval for the offender to go through a mental health court vs a regular court.

Another thing Hagler does with his change-making career is organize volunteer groups to teach deescalation training for those with mental health problems. These programs teach about different disorders such as psychosis or personality disorders, things that could trigger a person and how to cool down high risk situations.