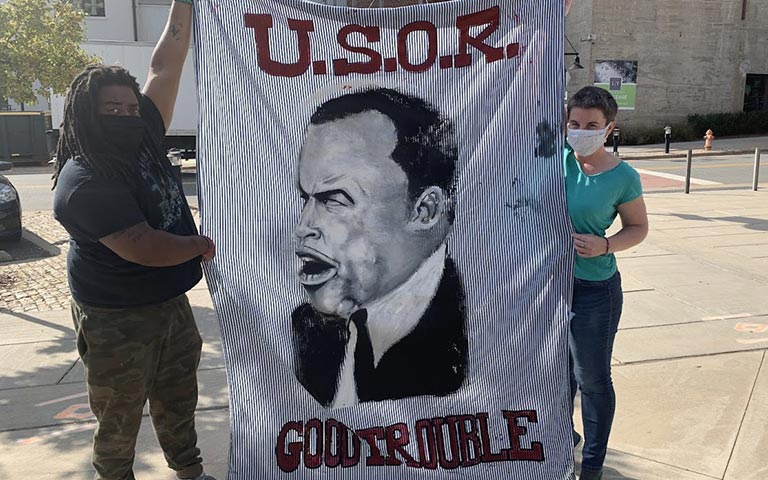 Karen Ashley is a local activist for racial justice who speaks her mind through writing and creating art with her partner Robert. She was born on a farm in Virginia and moved to North Carolina when she was 9 where she had an uneventful childhood.

Everything quickly shifted when she turned 16 and had to move to Sweden for her dad’s work. Shortly after the big move, a close friend of Karen’s experienced a profound trauma that led to subsequent traumas, rocking Karen’s whole world. Karen explained, “I was away from my friends and unable to grieve with them.” Whilst all of this was happening, during her time in Sweden, she was also realizing what it was like to be American in a different country. “I felt very dumb, uneducated, and angry at my education system.”

As a white person, Karen first realized racism lived within her in the 6th grade when she was coming home from a dance with her two best friends. They were talking about this one Black boy who was killing it in the middle of a dance circle. She recalled, “Someone said ‘He’s really cute too’ and I said, ‘Yea, he’s really cute for a Black boy.'" Immediately Karen felt bad and apologized. Her friends, who were Black, laughed it and shared that they often say the same about white boys, but the moment stuck with her. Even as a 6th grader, Karen knew what she said was wrong.

After this she started to pay attention to the little things her family would say, like her grandparents using racial slurs and her parents just telling her that, “Your grandparents were raised in a different time,” “Racism is a thing of the past,'' and “Things have changed now.” This led Karen to believe that that racism was a thing of the past. “I had to fight this belief in my family throughout my life as I saw racism unfolding around me and then entered into multicultural and multi-racial relationships, that became even more clear. When I had a bi-racial son, that changed my whole world. I saw clearly the contradictions I could not make sense of or rationalize. I saw how racism lives in white families, how quietly and carefully racism is protected in the name of 'peace' or 'unity.'”

Karen quit her job due to receiving retaliation for reporting a racist comment that was made at work in 2018; the comment made was justified with the phrase, “You just can’t say anything these days.” Karen did not accept a settlement offer that she saw as a way to keep her quiet and leave without exposing the racist practices she saw and heard at her job. She reflected, “You can try to brainwash people all you want, but we are alive beings and I think the hope is in young people because of what adults have not been able to do.” Karen was able to quit her job in January of 2020. All of these events in Karen’s life led up to her passion for racial justice.

After the comment was made, Karen knew she had to speak up somehow. “What can we do that is not just talk?” Both Karen and her partner Robert have used their voices through art the majority of their lives, so they thought it would be beneficial to share their art with others. In 2019 they started the United States of Racism as an Instagram page. They selected this name since racism is everywhere. “The USOR is a collective of art and writing meant to educate people about the various states of racism and how it lives and moves in our society.” It is an activist grassroots organization that is in a rest period at the moment due to covid, but through their time of healing they will come back stronger in 2022. 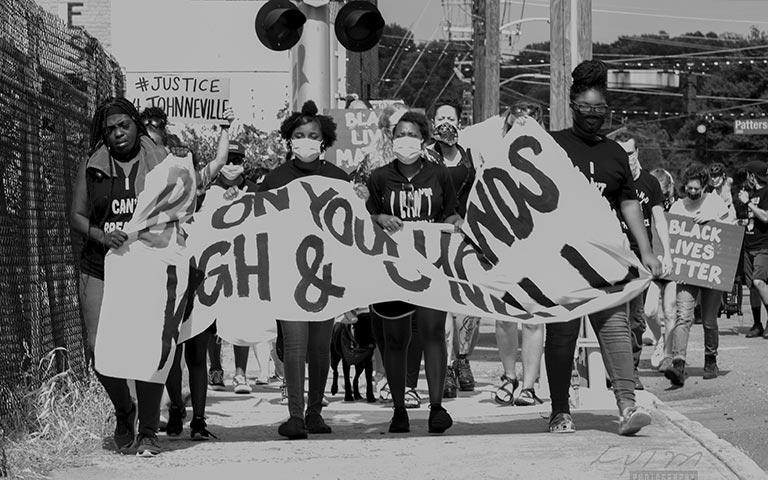 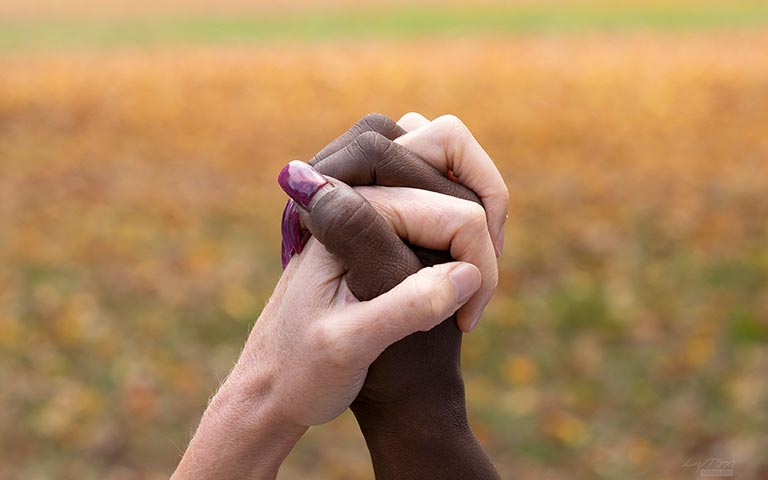 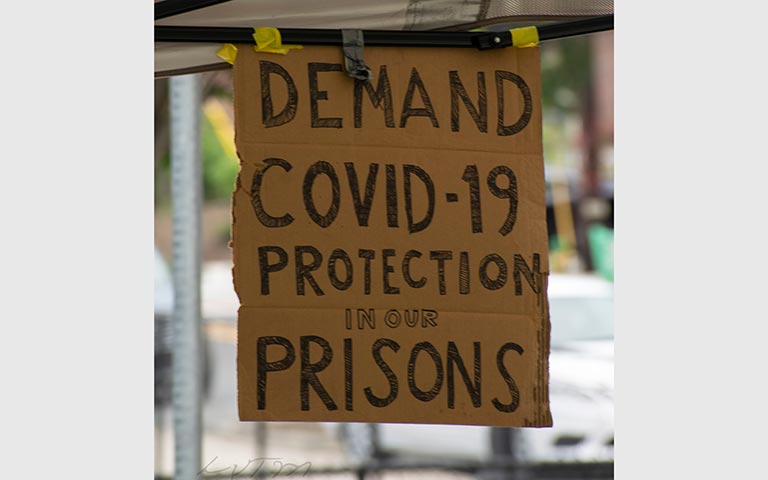 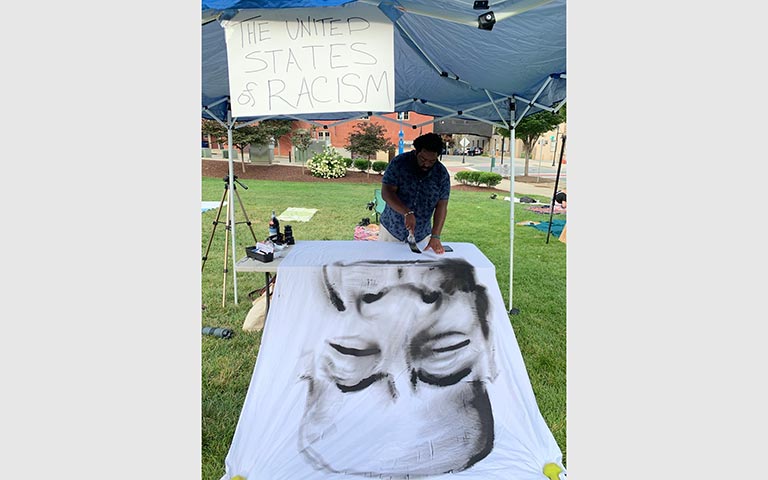 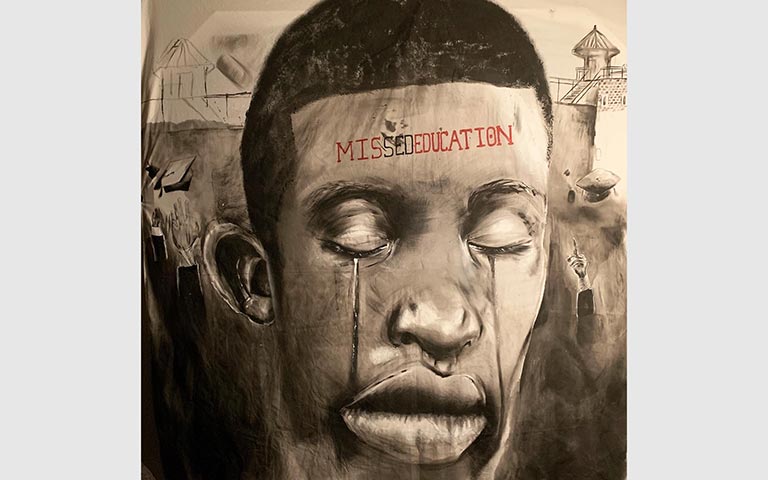 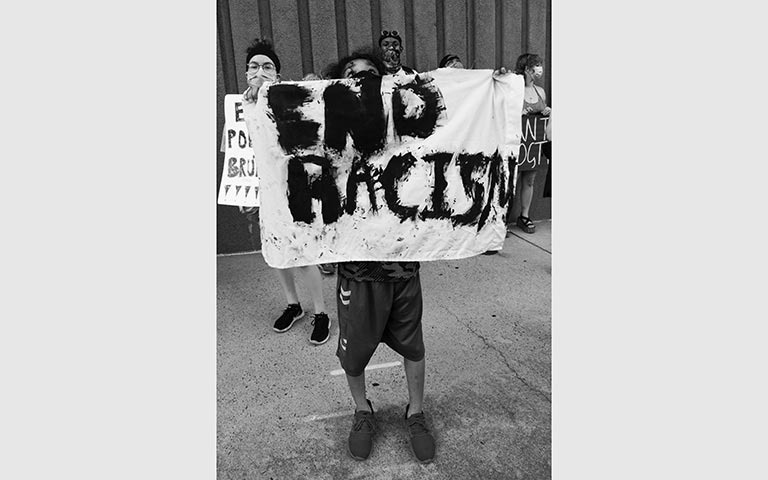 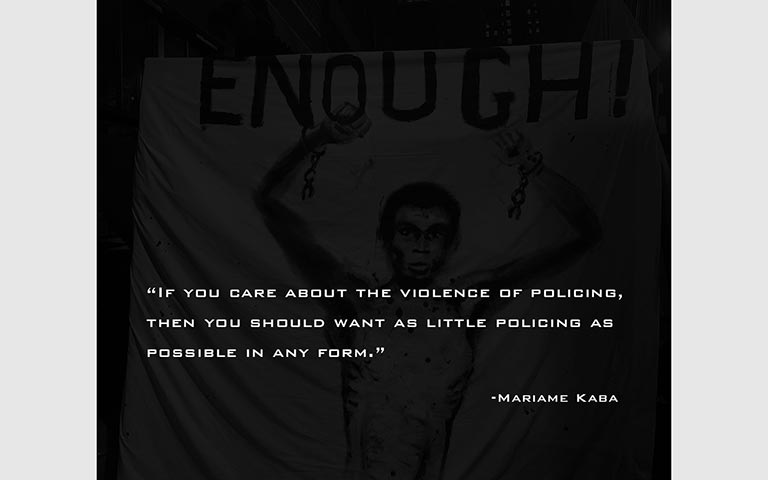 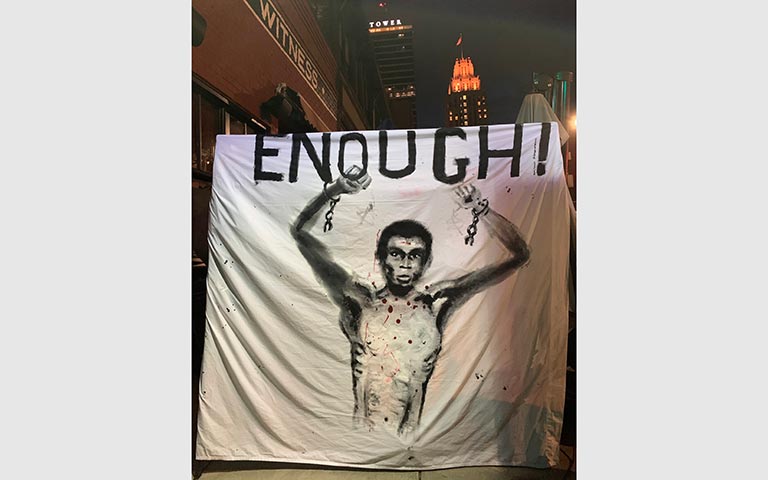 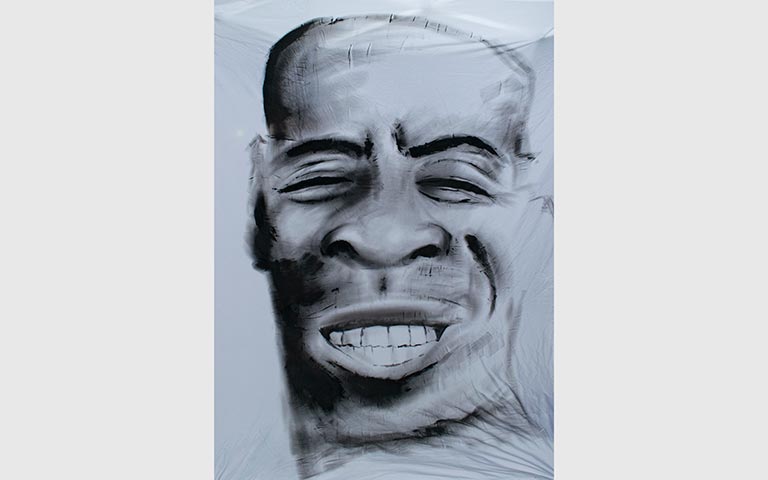 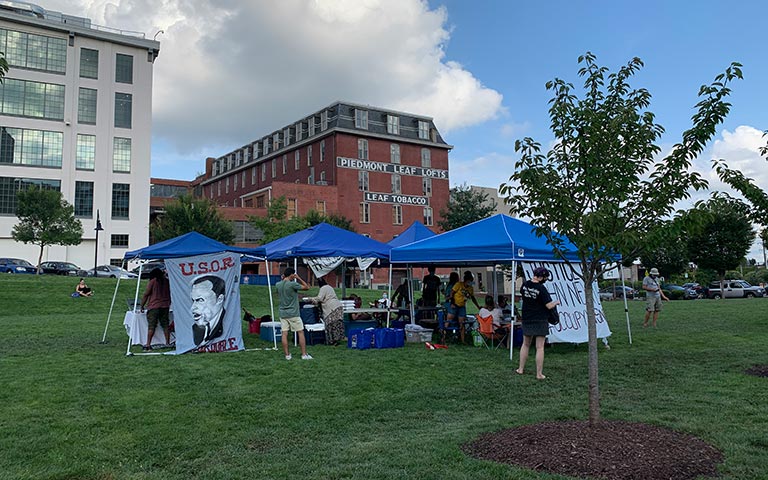 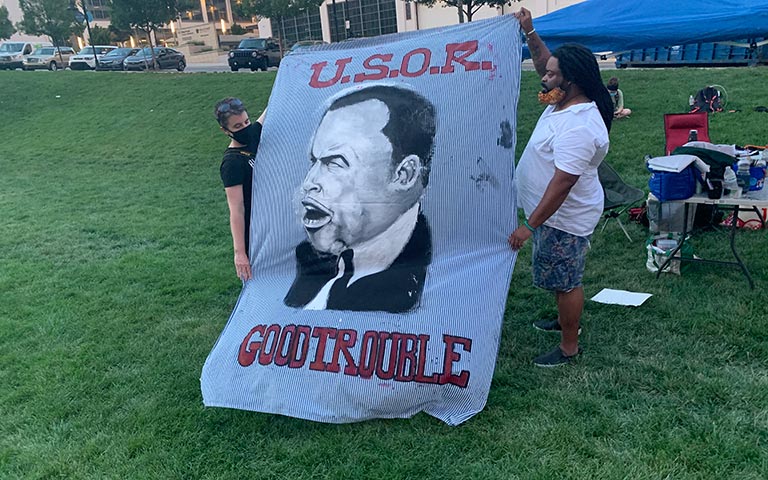 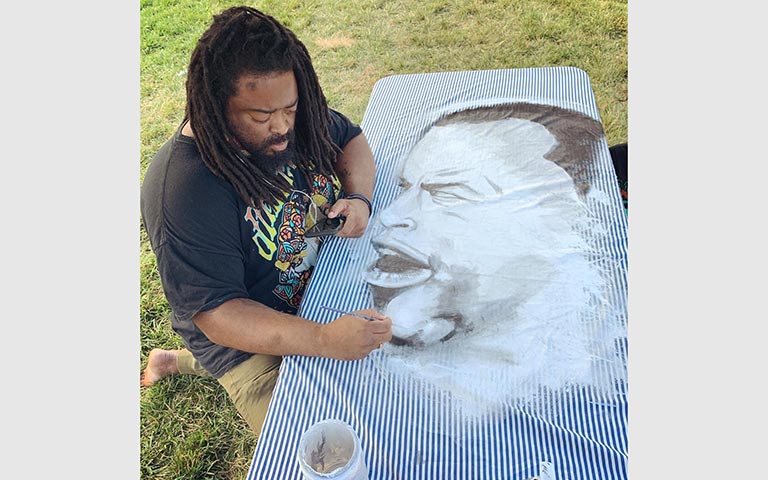 Covid and more widespread support for the BLM movement both happened in the same year. “We were not ready for 2020. … We were already angry enough in 2019.” In 2020, It was very difficult for Karen and Robert to see people all of a sudden wanting to know what they were doing with their organization. Karen and Robert already knew racism was everywhere and although it was encouraging to see people passionate about racial justice, it was also discouraging to see the events that occurred throughout 2020 and 2021.

Since the pandemic hit, Karen and Robert have been able to focus on individual healing since their past traumas had impacted their ability to be the voice they wanted to be. “Right now we’re still making art and we have things we are working on, but most of the work we’re doing is individual healing.” Karen believes that to explain things like racism you have to be well within yourself and she wants to set an example of that by telling her story. Karen says this is why she is so inspired by the younger generation, because they are so brave and bold to be vulnerable with their emotions. “If we’re gonna heal as a society from this wound of racism, then we have to do it within ourselves first.”

Karen is currently in the process of writing a book that will address white privilege and trauma. Here’s a short description of her recently posted in her advocacy role: “Karen is a mental and behavioral health advocate, a social justice activist and a writer currently working on her first book that will examine white privilege, generational trauma and alcohol addiction.”

In the future, Karen and Robert have a vision of bringing other local artists with a passion for racial justice together to create projects like art shows, sharing historical backgrounds with each piece of art so people are not just left only to interpret without essential knowledge of what the pieces represent. Their main goal is to grab the attention of their viewers in order to make an impact. They’re hoping to eventually collect artists’ works from all over the world, which they believe will be effective in the expansion of the USOR. As they recover from the pandemic, they plan to begin events like mini art shows at coffee shops so that people can see what they have been doing.

As Karen and Robert continue their work with the USOR, they want to encourage other artists and writers to keep creating and speaking their minds through art. Karen explained, “My hope is that people educate themselves and it’s not just about speaking out and making people angry, it’s about making them think.” Karen says that all mediums can be used as protest and it’s encouraging to see other artists making statements through their art. Art speaks very loud and Karen and Robert will continue to make people think through theirs.