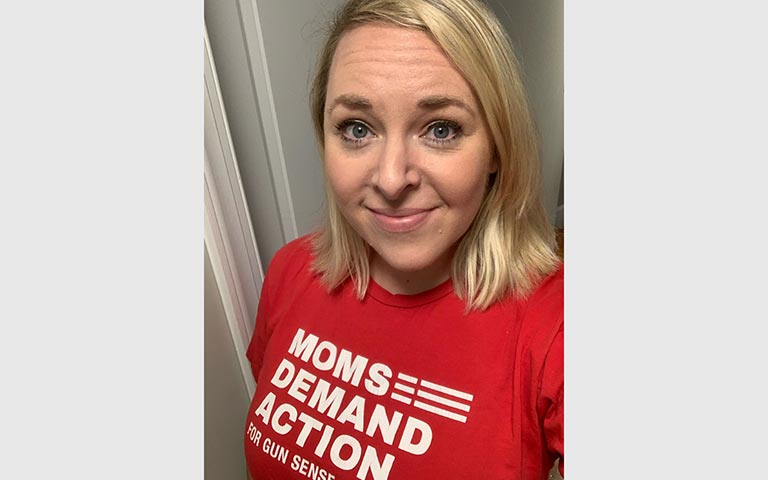 Finding a call to action isn’t easy, but this Changemaker has shown me that action is an essential part of change. She consistently sheds light and awareness on gun violence in North Carolina. If you see something, say something. I am here to talk about one changemaker in particular, Heather Levinson.

Heather was deeply affected in December 2012 after a gunman at Sandy Hook Elementary School in Newton, Connecticut, killed 20 students from ages 6 to 10 and 6 adults. At the time, her daughter was in kindergarten and was the same age as many of the students in the shooting. Heather was personally affected by the grief of the children who became victims. During the holidays that year, Heather found a Facebook organization called One Million Moms Against Gun Violence, which later changed its name to Moms Demand Action. Moms Demand Action is an organization whose goal is to decrease the number of deaths from guns. Heather joined and began seeing calls to action. She sent emails, letters, faxes, and shared information with Senators and the House of Representatives to demand that they support a reduction in gun violence.

A few years later, Heather and her husband moved to Los Angeles, where she found that the Moms Demand Action program was led by a strong group of women. This was her first time volunteering in a community with others who wanted the same changes as she did; previously, she had worked alone. She felt empowered to join the group. “I was just one of hundreds.”

Heather and her husband moved back to North Carolina when her second daughter was born to be closer to family. She helped to found North Carolina’s local chapter of BeSMART, where she went to meetings and got involved. BeSMART is a program that is meant to teach parents how to safely store guns and keep them out of the hands of children. Heather eventually was named lead of BeSMART for Winston-Salem and helped to create the Greensboro chapter. Heather coordinated North Carolina’s ‘Wear Orange’ campaign in June of 2018, to bring awareness to those we lost to gun violence and to uplift survivors of gun violence.

One of Heather's inspirations is Shannon Watts, the founder of Moms Demand Action. The day after the Sandy Hook tragedy, Shannon started a Facebook group that spread the message that all Americans can and should do more to reduce gun violence. The online Facebook group turned into an essential movement of Americans fighting for gun safety and public safety precautions that protect people from gun violence. Moms Demand Action has established a chapter in all 50 states of the United States and is part of Everytown for Gun Safety, the largest gun violence prevention organization in the country, with over 6 million supporters. In addition to Shannon’s work with Moms Demand Action, she is an active board member of Emerge America, which is one of the nation’s leading organizations for training women to run for office.

“Our organization has grown in so many ways,” Heather says, reflecting on her time with Moms Demand Action. Since 2012, Moms Demand Action has accomplished many of their goals. In 2021, the U.S. House Committee passed appropriations legislation with crucial investments to help reduce gun violence and former New York Governor, Andrew Cuomo, signed the first of its kind bill aimed at holding bad actors in the gun industry accountable. More than 1.5 million students across the United States now live in a school district that requires schools to educate parents about the critical importance of secure firearm storage in keeping schools and students safe, thanks to Moms Demand Action.

Heather recently stepped down from her leadership position with Moms Demand Action to follow Black leadership in the organization. The current leaders are trying to move the organization to where it is led by Black and brown women and want to allow women of color who have experienced gun violence to teach white women how to best use their voices.  “It is a really big honor and privilege to be serving with them,” Heather says. “This feels like a more authentic and powerful way to be a part of the organization right now.”

North Carolina’s local chapter of Moms Demand Action changed their name to ‘The Women's Gun Violence Prevention Coalition’. The organization's most recent win is that North Carolina’s schools are fully implementing the app, Say Something, which allows students to anonymously report concerns to admin and local police, into their school systems by the end of this year. North Carolina's chapter of Moms Demand Action visits the NC Legislature in the spring every year to address concerns and suggestions on how the state can improve its gun safety. While Moms still sometimes struggles with finding resources and balancing different group priorities, Heather reflected on the current moment, “Now, I couldn’t be more sure of the work we are doing.”

Heather hopes for a safe and equitable space for kids in schools for the future. She has continuously advocated for student and child safety from gun violence and has dedicated her time and energy to providing solutions to combat gun violence. Moms Demand Action and BeSMART continue to go in the right direction and make gun safety a priority.