Jessica McJunkins goes 'On The Run' with Beyoncé and Jay-Z

Fresh from traveling with Queen Bey and Jay’s On The Run II World Tour, McJunkins talks about working as a black musician and artist in New York and how she’s playing her part to help change the face of music on the national stage.

How did you become interested in music and violin?

When I was 8, I was watching an episode of “Mr. Rogers Neighborhood.” One of the guests was a little black boy who looked younger than I was, and he was featured playing the violin. I told my mother that I was “better than him.” She told me I needed to start lessons.

Representation is the reason why I started, but I think it was already unavoidable—my father is a jazz percussionist. Now, his primary craft is visual art, but music never left him and he still plays. My sister and I were constantly exposed to jazz, free jazz, world music etc. I really don’t think I’d be working in the way that I am if it were not for this.

My mother also plays piano. She’s a graphic artist by trade, but that open streak in a musical context is just as much her influence as it is my father’s. In today’s industry, you have to have that kind of flexibility and openness. It’s rare that an artist is able to make a sustainable living doing one single thing. If they’re able, it’s great, but it’s just not the reasonable default among this generation of performers. 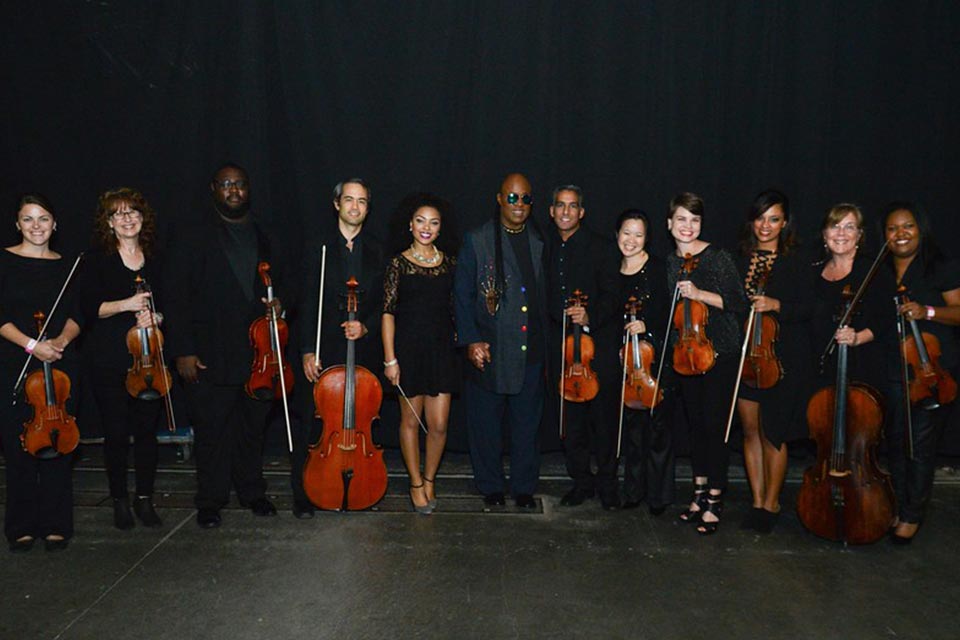 Why did you choose UNCSA for college?

I’d narrowed things down to state schools for financial reasons, and I ended up choosing UNCSA both because of the accessibility and because Kevin Lawrence chose me. That was very personally significant, as someone who’d been receiving the majority of my impactful musical education in an ensemble setting.

The idea that you could get a conservatory education with a better balance between learning and competing was also a huge factor. This is extremely rare in arts education.

Can you share a significant memory or campus spot?

The Pickle Jar! Many days spent weeping over a frozen lemonade after fleeing from masterclass. So many nerve issues. I also loved the Caf; the staff always watched out for me, even before they knew I was putting myself through school.

A common thread among my professors is the idea of teaching you in a way that actively prepares you to learn and evolve on your own. You have to have that as any kind of professional, but especially in the arts, and especially in this climate. Attention spans are at an all-time low, and the cultural tide shifts so quickly; you have to be prepared to adjust, always—and UNCSA prepares you for that.

A common thread among my professors was the idea of teaching you in a way that actively prepares you to learn and evolve on your own. You have to have that as any kind of professional, but especially in the arts, and especially in this climate... you have to be prepared to adjust, always—and UNCSA prepares you for that.

You also simply cannot get as well-rounded of an arts education from any other model. Being part of student-run productions helped me to appreciate crew members on so many stages, and this communication saves time and now introduces me to UNCSA alumni all over the world.

Stevie Wonder in 2015, Beyoncé (especially the Coachella shows), touring with the Carters last year, the Fallon performances with The Roots, Radio City with Solange, the Apollo with Lauryn Hill, Sydney Opera House with Max Richter and so, so much of my time playing on a cruise liner was crazy—like nights in Bali and Hanoi.

I love traveling; part of the reason OTR [On The Run Tour II with Beyoncé and Jay-Z] was amazing was because it was my first time in Europe. No words for that. The prep work for Coachella and the tour were also highlights. Rehearsing dance for hours a day, learning choreography from her choreographers, and then adding the instrument, plus pre-recording the shows on our acoustics but performing with electrics, was an insane adjustment. Adjusting to the steep, fast learning curve changed everything about the way I approach projects, people, practice, SCALES… everything.

How did you get started with freelance and contract work?

I fell into contract work as I was having to find players to cover people at the last minute for a broadcast of the “Tonight Show with Jimmy Fallon” that featured Yolanda Adams, Hezekiah Walker and The Roots.

Ahmir (Questlove) asked me if I knew any players of color that he could hire to perform behind Yolanda Adams. I knew people who had the discipline, funk and positivity needed to walk in on the day of taping, write a chart between sound check and taping, memorize that chart, have the look right, roll with changes coming in every few minutes, walk into the taping and play it down one time.

There is a very low-key, very savage culture of racism on the freelance scene in New York, and quite frankly, artists are tired of seeing the same demographic appear on the national stage. So, besides the shine of the opportunity to perform with these guys, it was incredibly exciting to have a hand in changing the standard.

It kind of just took off from there. There is a very low-key, very savage culture of racism on the freelance scene in New York, and quite frankly, artists are tired of seeing the same demographic appear on the national stage. So, besides the shine of the opportunity to perform with these guys, it was incredibly exciting to have a hand in changing the standard. With things like this, you have to assert your right to claim the space, and to advocate for the same cultural equity as everyone—not just in personnel, but in intentional hiring.

I only work with people who are fully committed to every detail of the gig. I also learned a lot, very quickly, working with Solange for her shows in Los Angeles, New York and the Bay Area. I got the call for the New York and D.C. shows three days before the hit, and she wanted 14 string players of color at each show: all capable of memorizing the show, showing up with a specific face and armed with complete measurements at least 24 hours before day of show. The choice kind of made itself.

What other organizations are you involved with?

I currently sit on the Junior Board of the Harmony Program, which is a way that I am able to give back philanthropically. My musical education until college was almost completely covered by scholarships, so it just feels counterproductive not to pay that forward. I also taught with the Harmony Program at two sites in New York.

Between the teaching and my background, I feel like I can be a link between faculty and board members. The gap between groups like these within an organization as large as the Harmony Program can be demoralizing, so I’m grateful to be a part of something so committed to moving forward. I’m also preparing to sit on a panel at Sphinx Connect in Detroit in February, which I’m excited about because it means I’ll have access to the same kinds of help as the kids we’re speaking to.

Show up early, dress with intention, be kind, work hard, compromise only if you must, speak to people, look folks in the eye, read always. Basic etiquette can be more refreshing than any skill. People who spend a large amount of time alone, like in a practice room or studio, can have a tendency to neglect social norms, and that can quickly lose you a job.