UNCSA School of Music alumnus and North Carolina native John Hyland (’97) has come full circle, but not without every ounce of determination and bravery he could muster.

After graduating from high school in Charlotte, where he was active in musical theatre, Hyland moved to Winston-Salem to help his grandparents. He began taking singing lessons at UNCSA’s Community Music School with Martha Teachey, who recognized his talent and encouraged him to pursue a career in opera.

He auditioned and was accepted to the School of Music at UNCSA. He studied vocal performance and opera with Glenn Siebert and later, Derrick Lawrence. During this time, Hyland made his debut with Piedmont Opera and also sang at the Brevard Music Center and at the Opera Festival di Roma in Italy. To make ends meet, he picked up work as a temp in the UNCSA Summer Session Office and did some catering work at Salem College.

After school, Hyland landed in New York, where he performed a variety of roles including being an understudy in “The Phantom of the Opera.” Eventually, he returned to the Southeast to start a family and resumed working in the food service industry, managing several restaurants.

Meeting a U.S. Army veteran at one of those restaurants prompted Hyland to take the Army entrance test. He tested well and joined the Army at age 33, where he trained to be a Cavalry Scout, an elite position that performs reconnaissance and enemy intelligence-gathering missions. In October 2006, Corporal Hyland was deployed to Iraq, where he was stationed with B Troop, 6th Squadron, 9th Cavalry Regiment, at Forward Operating Base Normandy. His team of Scouts searched for combatants in enemy territory. 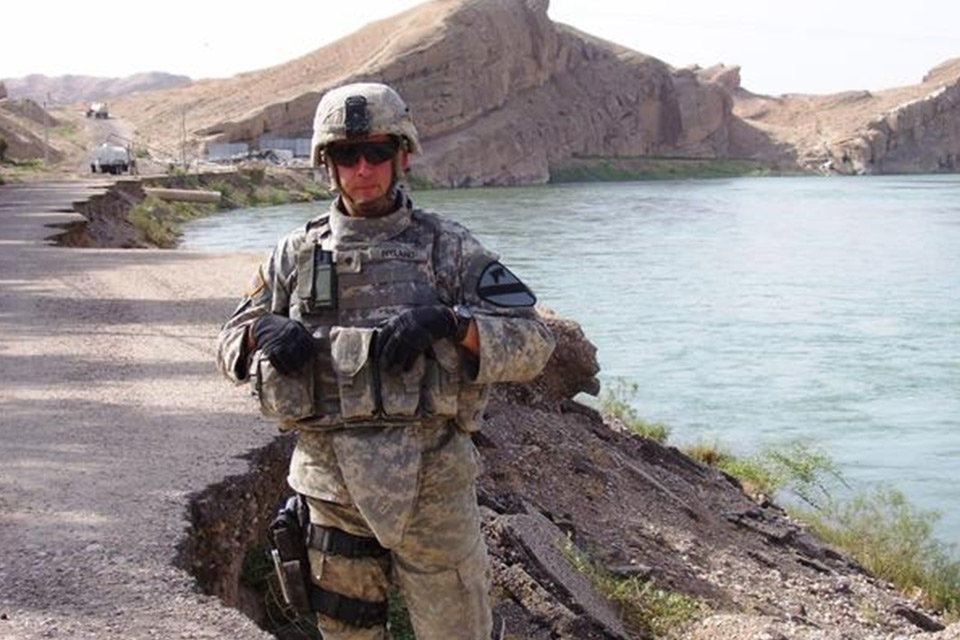 On a mission near Baghdad on Sept. 11, 2007, Hyland was the gunner in a vehicle that was hit by an improvised explosive device, or IED. He sustained extensive pelvic and back injuries and lost his left leg below the knee. Doctors told him he would never be able to walk on his own again.

In 2009, Hyland was recommended by his former brigade commander to participate in a program called “Operation Proper Exit.” The program was designed to give wounded soldiers the opportunity to see development and progress in the geographical area where they were wounded.

Hyland used the trip as an opportunity for growth and left his wheelchair in the United States, carrying out the visit on foot – a feat thought impossible only two years earlier. Hyland said he was impressed by the changes he found.

“There’s a soccer field and a market where I got hurt and before, there was nothing there,” he said.

After his trip, Hyland returned to San Antonio and resumed his recovery at Brooke Army Medical Center until it came time for his medical retirement from the military in 2010. He retired as a Sergeant with a Meritorious Service Medal, in addition to his Purple Heart.

Since then, Hyland has spent time raising his three children with his wife, Erica, a Neonatal Intensive Care Unit Nurse. With her support, he returned to his first love: singing.

On Memorial Day Weekend 2010, Hyland was selected to sing the national anthem for the Coca-Cola 600 in his hometown of Charlotte. He has also sung the national anthem at Madison Square Garden and at a host of other occasions. In addition, he frequently sings at Community Bible Church – an interdenominational mega-church in San Antonio – with his son, Hunter, who attends North East School of the Arts.

“I personally have come a long way from the battlefield in Iraq nine years ago and refuse to let that and the injuries define the rest of my life,” Hyland said. “I’m so blessed God saved my life and is giving me another chance at my singing career.”

Hyland’s story has been featured by The Huffington Post and The New York Times, among other publications.