Internationally-known dancer, choreographer and actress Helen Pickett praised high school graduates of the University of North Carolina School of the Arts for their courage in choosing to be artists.

“As artists, we are imbued with courage,” said Pickett, who spoke at the commencement ceremony for 124 students on May 14 in the Stevens Center. “Often times, we do not name it as such or realize the steps involved, but we dance, compose, design, collaborate and rehearse bravely every day.” The resident choreographer for Atlanta Ballet who has created more than 30 ballets in the United States and Europe told the graduates she could feel their courage bubbling. “You will have the chance to discover places that seem unreachable for most human beings. You have audaciously chosen to be artists,” she said.

In a speech laden with inspirational quotes, Pickett cited the mother of Olympian and Ultimate Fighting Champion Ronda Internationally-known dancer, choreographer and actress Helen Pickett praised high school graduates of the University of North Carolina School of the Arts  for their courage in choosing to be artists. 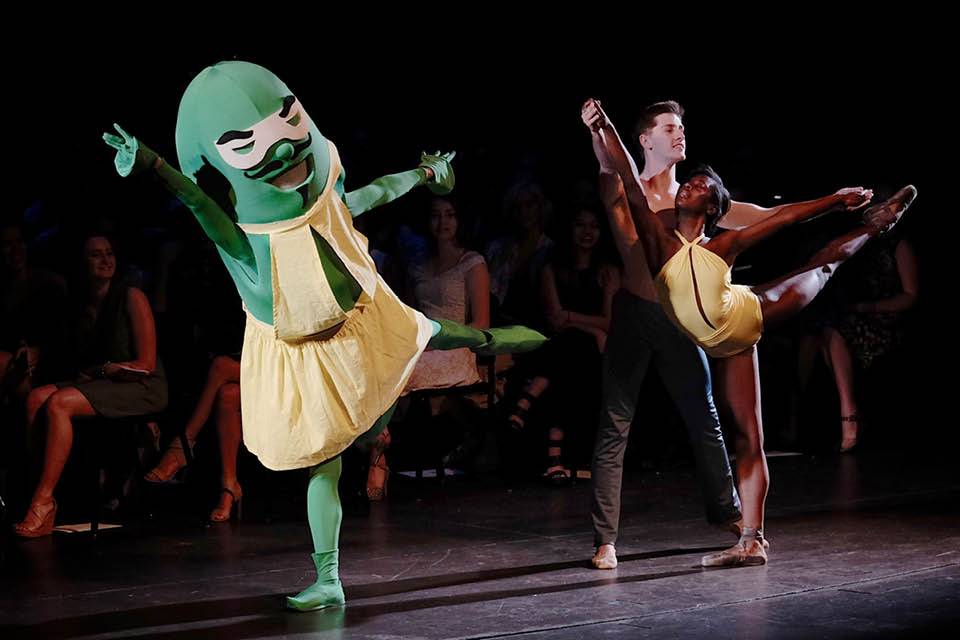 Pickett, who has received choreographic commissions from Boston Ballet, Washington Ballet, Atlanta Ballet, Kansas City Ballet, Chicago Lyric Opera, Oregon Ballet Theatre, Semper Oper/Dresden Ballet, Ballet West and Dance Theater of Harlem, among others, encouraged the graduates to be strong and resolute and ask for what they want.

“There are two options when you decide to ask a question: yes and no. That makes things rather simple, right? Well, yes and no,” Pickett said. “Another no is hard to take and if it is a yes, there is a chance of failure. But look at it this way. If you do not ask the question it is always no. If you do ask the question you have a 50/50 chance. I’ll take those odds and so will you! “You might come up against a plethora of nos. But there are yeses, and because they are fewer than the nos, they feel so good,” she said.

Pickett quoted her father: “My father used to say 99 percent work, 1 percent talent. I thought, come on, really? Not. All. That. Work. What I did not know was how much I would love that work and continue to burn for that work,” she said.

She quoted “The Road Not Taken,” a poem by Robert Frost:

“Two roads diverged in a wood, and I –

“I took the one less traveled by,

“And that has made all the difference.”

“Regrets, whether you have them or not, are up to you,” Pickett said. “The way not to have regret is action. Action leaves regret in the dust.” Pickett told graduates to choose nature for inspiration. “It is the will of nature that will inspire you. It is the persistent radiance of the sun; it is the determined blade of grass or the loud chirp of a bird,” she said. “It is life, all around you. And that life is always there to inspire you and refuel you with energy.”

She quoted rebel novelist, poet and journalist Jack Kerouac: “… the only people for me are the mad ones, the ones who are mad to love, mad to talk, mad to be saved, desirous of everything at the same time, the ones who never yawn or say a commonplace thing, but burn, burn, burn like the fabulous yellow Roman candles exploding like spiders across the stars and in the middle you see the blue center light pop and everybody goes AWWWW!”

In conclusion, she told the graduates: “Here’s to your galaxy bright futures. I, for one, cannot wait to be awed.”

Pickett was a guest artist in the School of Dance during the spring semester and set her work, “Petal,” on UNCSA students for Winter Dance. She received an honorary Doctor of Fine Arts during the commencement ceremony and was named UNCSA’s first Visiting Distinguished Artist.

As such, Pickett will be more deeply engaged with the School of Dance than a typical guest artist would be, explained Dean of Dance Susan Jaffe. “We’re very excited to explore this new role with Helen. Her continued association is a tremendous benefit to our students,” Jaffe said.