The iconic classical Russian ballet “La Bayadère” will come to the famed Teatro Colón in Buenos Aires, Argentina, in November with staging by School of Dance Dean Susan Jaffe and Assistant Professor Laura Martin. Opportunities to stage a ballet internationally are considered rare and an honor.

Prima ballerina Natalia Makarova approached Jaffe with her request to stage. Makarova coached the University of North Carolina School of the Arts dancers in Act II of La Bayadère (Kingdom of the Shades),” which was presented at the 2016 Spring Dance concert.

“Natalia was so complimentary,” Jaffe says. “When she asked me she said she believed I was one of the only ones left who understood how to stage these classical ballets. She knows I understand the style very well. I said I could only do it if Laura could share it with me because I just don’t have the time to do all of it. Natalia was very agreeable.”

The ballet has roughly 2-1/2 hours of choreography that includes large group dances, soloists, principals and many characters. When you stage a ballet, you are given the counts, the style, choreography, the emotional intention, and musicality that make up the work. You teach the dancers not only all of those pieces but also the character they are portraying.

Only the trusted ballet masters are being asked to do staging. Laura is so good at staging Corps work and ballets. Laura is precise. She is clean. The dancers know what they are doing stylistically and count-wise. She is a very thorough stager, and I trust her completely.

Susan Jaffe, Dean of the School of Dance

Martin danced in the Corps de Ballet in“La Bayadère” for several years while both she and Jaffe were at American Ballet Theatre (ABT). Martin has danced all the female parts in the Corps. She knows her stuff.

“It was fun and it was huge for me,” Martin says. “I was honored to be asked or to be allowed to do this.”

The Teatro Colón, similar to New York’s Metropolitan Opera, is a large complex with several underground levels. The studio where Martin and Jaffe worked was as big as the actual stage and included an orchestra pit. The days there were spent working with the dancers for up to five hours. An interpreter was available to help, but being able to verbally communicate is apparently not a huge obstacle in dance.

“It’s music. It’s ballet. There is a universal language,” Martin says. “The difficulties (being where Spanish is spoken) were in the coaching when you were trying to express a different quality or what you wanted them to be thinking. As far as the vocabulary, we knew the same language because ballet is in French.”

Martin spent 2-1/2 weeks early in the fall semester to teach and coach the 48 members of the Corps and numerous supernumeraries. Jaffe flew in later to stage the principals, soloists and main characters. They overlapped for one day but kept in contact through email. Jaffe also spent about 2-1/2 weeks before overlapping with Makarova for one day as Makarova took over the remaining coaching on the ballet.

Staging is not only teaching the dance, but coaching and correcting. Sometimes though, Martin says she would let the dancers do sections of the dance just to help build their stamina before making corrections. For most of the dancers of the Permanent Ballet of the Teatro Colón, “La Bayadère” was new, and those who had danced it before may have danced one of the several versions that exist.

On the day the two overlapped, Martin showed Jaffe how far along the sections of the ballet had come. 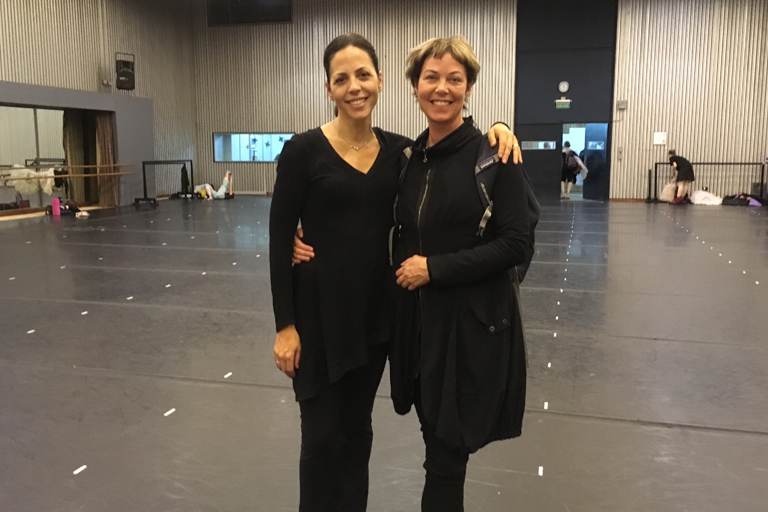 Laura Martin, left, with Dean Susan Jaffe in one of the large underground studios in the Teatro Colón. They spent 2-1/2 weeks each staging "La Bayadère" in Buenos Aires, Argentina.

“When Susan comes in to coach, it’s incredible because she was a principal for 22 years.” Martin says, “She was coached in a way that is completely different from the way the Corps is coached. If I were to stage this ballet again, there are certain dances that I have more to give just on hearing how she was coaching.”

Martin said it is good to work with professional dancers even though staging is a large part of her job at UNCSA. You can see the results of her staging in “The Nutcracker,” Winter Dance, Spring Dance and repertory performances each year.

“I’ll stage any dance anybody asks me – really,” Martin says. “UNCSA is a great place to learn how to stage and I can grow in the area of staging for professionals.”

“Only the trusted ballet masters are being asked to do staging,” Jaffe says. “Laura is so good at staging Corps work and ballets. Laura is precise. She is clean. The dancers know what they are doing stylistically and count-wise. She is a very thorough stager, and I trust her completely.” 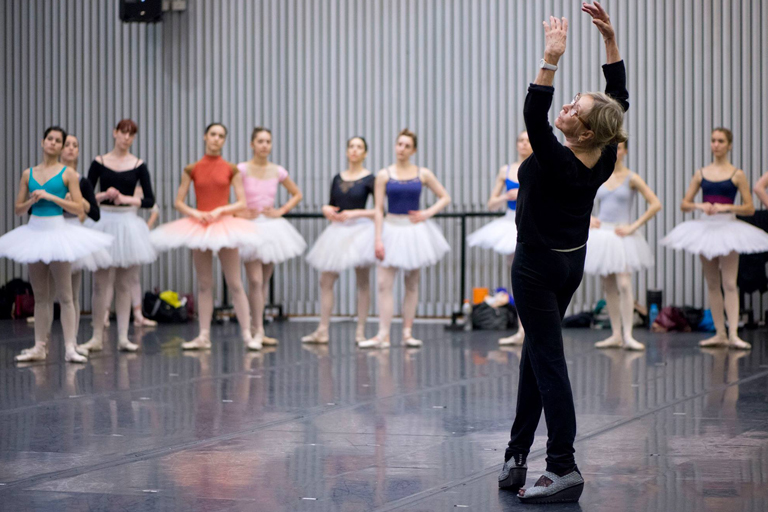