The University of North Carolina School of the Arts has received an anonymous gift of $10 million, the largest gift the school has received from an individual donor, Chancellor Lindsay Bierman has announced.

The gift will be used to establish the Institute for Performance Innovation, which will support the creation of a groundbreaking graduate Animatronics Program in UNCSA’s School of Design and Production and advance a cutting-edge graduate program in Gaming and Virtual Reality in the School of Filmmaking.

“We are profoundly grateful for this transformative gift, and deeply moved by the donor’s guiding vision and passion for UNCSA,” Bierman said. “It allows us to develop new career pathways for our students by enhancing our facilities, investing in technology, expanding our curricula, and partnering with businesses that shape and define our culture.

“The Institute will strengthen our position as a leading arts conservatory and creative incubator, and will directly and immediately impact the next generation of artists who will dominate the world’s screens, stages, and creative industries,” he added. 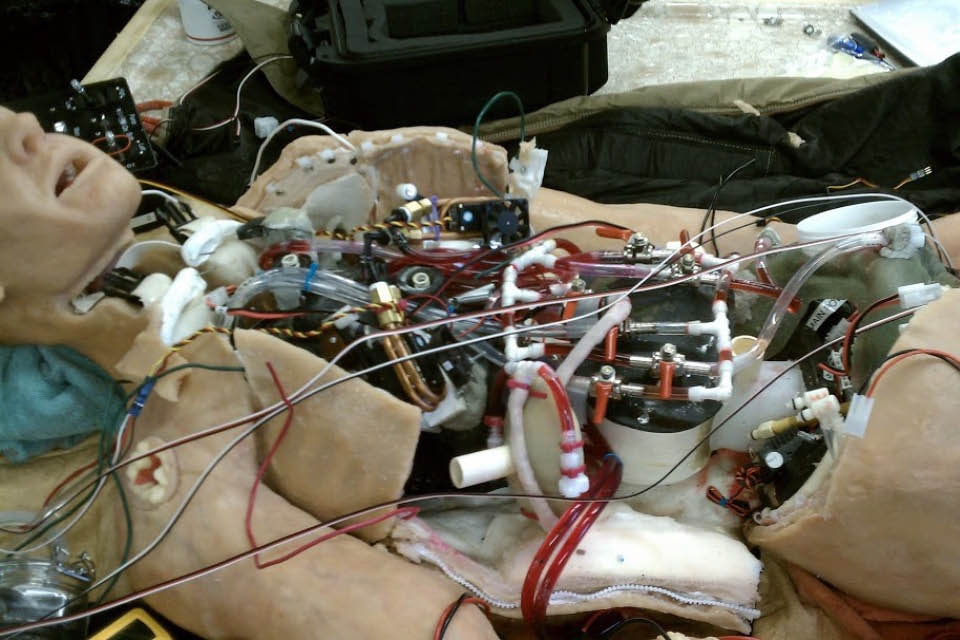 An animatronic model, created by students and faculty in the School of Design & Production.

Chief Advancement Officer Edward J. Lewis said the donation will be a lead gift in UNCSA’s upcoming comprehensive campaign. “This gift will provide tremendous momentum as we build partnerships that will keep the School of the Arts at the vanguard, leading the way in how artists of the future will learn, hone and expand their craft,” he said. “I thank the anonymous donor for their generous investment in the future of UNCSA.”

Approximately half of the gift will be directed toward scholarships and faculty, with the balance providing an endowment to support infrastructure and operating expenses for the new programs.

“The Institute for Performance Innovation will optimize relationships with entertainment leaders such as Disney, Cirque du Soleil, Oculus, Advanced Micro Devices (AMD), Radiant Images, DreamWorks, and Universal Studios, among others,” said newly-appointed Provost David J. English. “The Institute will support efforts connecting the robust curricula with industry professionals in two exciting areas – animatronics and gaming/virtual reality. That will position UNCSA at the apex of arts and entertainment training.

This transformative gift will enable us to offer classes in areas that are not offered in any other school in the world, to train students in the fastest-growing markets in the entertainment industry.

“This transformative gift will enable us to offer classes in areas that are not offered in any other school in the world, to train students in the fastest-growing markets in the entertainment industry,” English added.

Michael J. Kelley, Dean of the School of Design and Production (D&P), said, “This is a groundbreaking opportunity that will keep D&P in the forefront of technological advances in the industry and solidify our current position as a global leader in the rapidly-changing world of design and production.”

Kelley said animatronics is “technology, mechanics and art blended together. By building on existing curricula in areas including stage properties, wig and makeup prosthetics, stage automation and robotics, D&P will train the next generation of artists for leadership-level positions in the fields of Creature/Animatronic Design, Sound Design, Sound Engineering and Mechanical Engineering for the broader entertainment industry.

“These opportunities include market segments beyond our traditional reach, such as theme parks, cruise ships, live destination attractions, live projection, and entertainment shows and spectaculars like the Olympics and Super Bowl,” Kelley added.

The stand-alone School of Design and Production is the only program of its kind in the nation (most universities combine design and production with drama in general theatre programs). It has long-established relationships with top companies in the industry (such as WorldStage, Electronic Theatre Controls (ETC), and TAIT Towers), where literally scores of its alumni are employed.

The Institute for Performance Innovation will be a future-focused laboratory where designers, filmmakers, musicians, dancers, actors, and artists of all kinds can reimagine, reinvent, and reshape arts experiences for 21st Century audiences.

Film Dean Susan Ruskin said, “The School of Filmmaking is poised to build on our history of success and move toward the leading edge of new technologies in storytelling with immersive entertainment, gaming and virtual reality.”

The new program would fully utilize the School of Filmmaking’s New Media Building, a 30,000-square-foot, state-of-the-art facility for digital design, gaming, animation, special effects and immersive entertainment that opened in 2015.

In ranking the School of Filmmaking among the top 20 film schools in the country for the fourth straight year in 2016, The Hollywood Reporter said the UNCSA film school “is transforming into a cutting-edge tech hub. This fall, it’s offering a new track in immersive entertainment and augmented reality as students create a VR (virtual reality) movie with help from Jacquie Barnbrook, producer of The Martian VR Experience.”

Ruskin said UNCSA is one of only 11 universities nationwide chosen for the Oculus NextGen inaugural program. “This program provides access to hardware, guest lectures, creative advisement, and exposure to the virtual reality industry as well as our colleague schools, as we all explore new ways to train the next generation of storytellers,” she said.

Bierman said the Institute for Performance Innovation will be “a future-focused laboratory where designers, filmmakers, musicians, dancers, actors, and artists of all kinds can reimagine, reinvent, and reshape arts experiences for 21st century audiences.

“I feel confident our donor will take great pride in what we accomplish through this extraordinarily generous gift,” he added.

Continue the momentum.
Make a gift to support the artists and creative innovators of the future.