Kendra Bragg Harding composed numerous songs before studying composition as a graduate student at the University of North Carolina School of the Arts School of Music. But her work on establishing the El Buen Pastor Proyecto Lullaby is her own baby of sorts – that she both holds tenderly to her heart and talks about like a proud parent.

The Lullaby Project, designed by Carnegie Hall, pairs accomplished musicians with women to help them write lullabies for their children. The women in the organizations that produce the Lullaby Project are under a tremendous amount of stress: from being in jail, living in a homeless shelter, being a teen mother or like the mothers Harding serves with at El Buen Pastor who have immigrated to the United States. Winston-Salem’s El Buen Pastor Latino Community Services partners with Latino families to equip children and adults to fulfill their educational and economic potential.

“It has therapeutic implications,” Harding says. “We’re not music therapist, but the Lullaby Project is used for people that are in difficult situations as a way for them to learn how to express themselves and how to connect with their children. When you are stressed, it can be tough because you are in survival mode. It’s such a simple concept and yet the ramifications are very broad.” Listen to selections from El Buen Pastor's Lullaby Project here:

Harding was already serving through UNCSA’s ArtistCorps at El Buen Pastor when the Director of Family Literacy Erika Stewart asked if she’d be interested in doing a Lullaby Project with the parenting classes. As an ArtistCorps member, Harding serves Pre-K students by using the arts as a catalyst for acquiring context and English vocabulary. (Read Harding’s ArtistCorps blog about her work at El Buen Pastor.) The Lullaby Project seeks to strengthen the bond between mothers and their children, so it seemed like a great opportunity to positively impact the children she was serving. 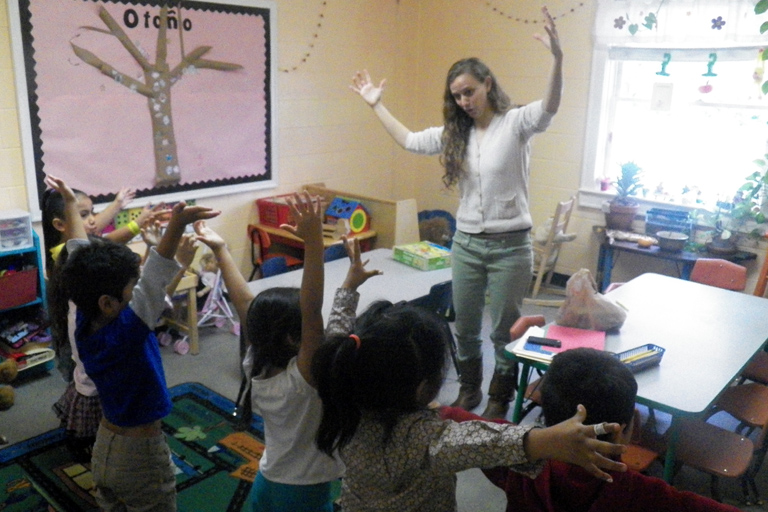 “The difference in a way a mother talks about herself before and after the project is staggering,” Harding says. “When people are in a situation where they don’t have resources they often feel like they are failing – that there is something wrong with them. This project gives them an opportunity to succeed, to try something they’ve never tried before, to be creative, to be artistic and to be vulnerable and to express their feelings for their child in a way that is positive and tangible.”

Getting the Lullaby Project up and running

In June 2016, Harding attended a symposium at Carnegie Hall to learn about the process and structure of setting up a Lullaby Project. There was a lot of interest from the mothers at El Buen Pastor, but they were tentative, she says.

We tried to encourage them and help them understand that we are not going for Grammy-winning here. We are just stretching our creative muscles and creating something that is a life-long object that your child can have of you.

“We tried to encourage them and help them understand that we are not going for Grammy-winning here,” Harding says. “We are just stretching our creative muscles and creating something that is a life-long object that your child can have of you.”

This project proves to the mothers that they can accomplish something that they have never tried before. Harding recruited community musicians, other ArtistCorps members and even her songwriting parents to work one-on-one with the mothers on their lullabies. She also found interpreters to help bridge the communication gap.

The Lullaby Project is not just a one-time project, but something that will be on-going. Harding originally used Carnegie’s model of writing a song one day, recording it the next and following with a sharing session where everyone listened to the songs together. But she elongated the time frame so it will work better for the El Buen Pastor organization. And now that “round one” is complete, she says, she has a few more adjustments to make in the structure of the program. She wants to stretch the project over a six- to eight-week period to allow additional instruction in voice so they can sing the lullabies themselves. Harding says that some mothers wanted to sing on the recordings while others didn’t, and some while gaining confidence during the project – decided they wanted to sing themselves the day of the recording.

“We would have everyone queued up for the recording when a lot of mothers said they really wanted to sing because it was for their child so some of our tracks are under-rehearsed,” Harding says. “We were excited though, because before you couldn’t get these moms to sing – even in a group. They really wanted to take ownership of this and to make it theirs. When the moms heard their tracks, they were happy with them, which is what is important.”

Creating love songs to their children

Harding worked one-on-one with some of the mothers, but one in particular was awe-inspiring. While she and the mother worked on the lyrics and tune, the mother’s children were at their feet.

“Just seeing how much this woman adored her kids and wanted to do her best for them was absolutely awe-inspiring because you could tell – even through all the difficulties she’s had in her life – it hadn’t shaken her desire to give her kids the best,” Harding recalls. “There was a gentleness that came through, not only in her interactions with her children, but in her lullaby too. Seeing that part of her personality come out in the song was just really fantastic for me.”

There was a gentleness that came through, not only in her interactions with her children, but in her lullaby too. Seeing that part of her personality come out in the song was just really fantastic for me.

The community of women and children gathered for the sharing time where they listen to all of the songs. Babies wiggled on their laps and children played – perhaps not even realizing that it was their name in a song that played.

“They are blissfully unaware of what’s going on,” Harding says of the children. “In a few years when they are listening to their song and are reading the letters their mother wrote to them, they will have something they can cling to in their difficult times. They will know that their moms care and want to be there for them. This is one of the most rewarding things about the Lullaby Project.”