In a show about fashion, fashion makes a show

“She who leaves a trail of glitter is never forgotten.” This mantra guided Costume Designer Jordan Jeffers for this spring’s production of The Man of Mode and certainly helped make the show unforgettable.

Jeffers and Wig and Makeup Designer Emily Young were tasked by Guest Director Jesse Berger with updating elements of the characters’ looks in this Restoration-era comedy. The result was as Berger directed—classic silhouettes with surprising, subtle modern touches, and yes, even some glitter-inspired sparkle. 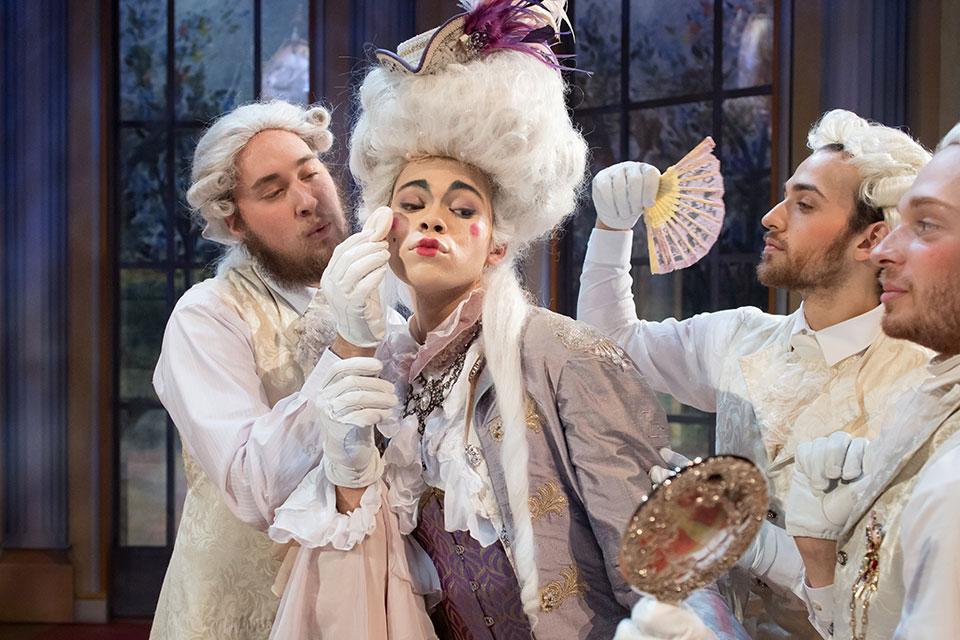 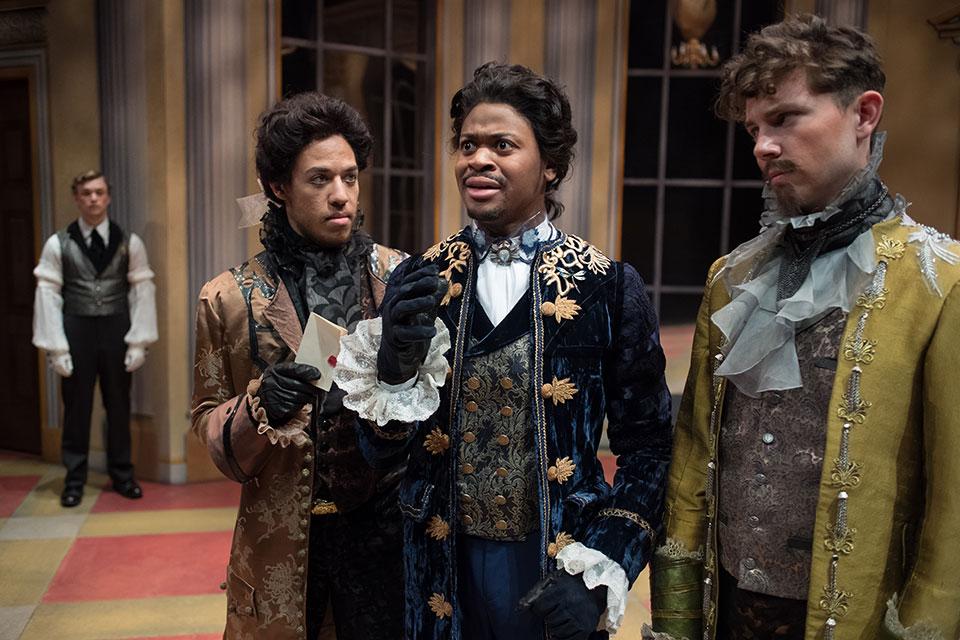 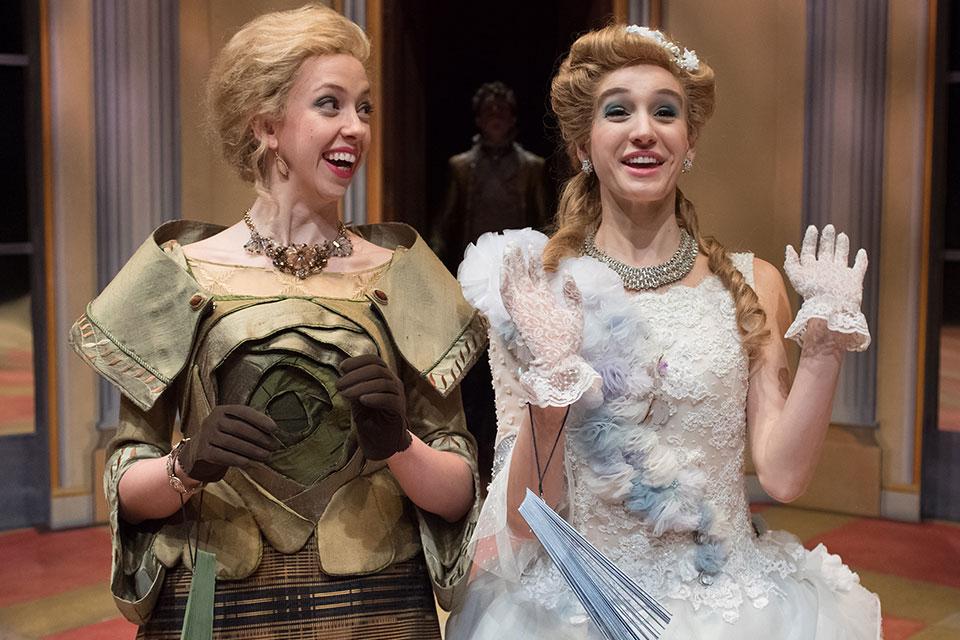 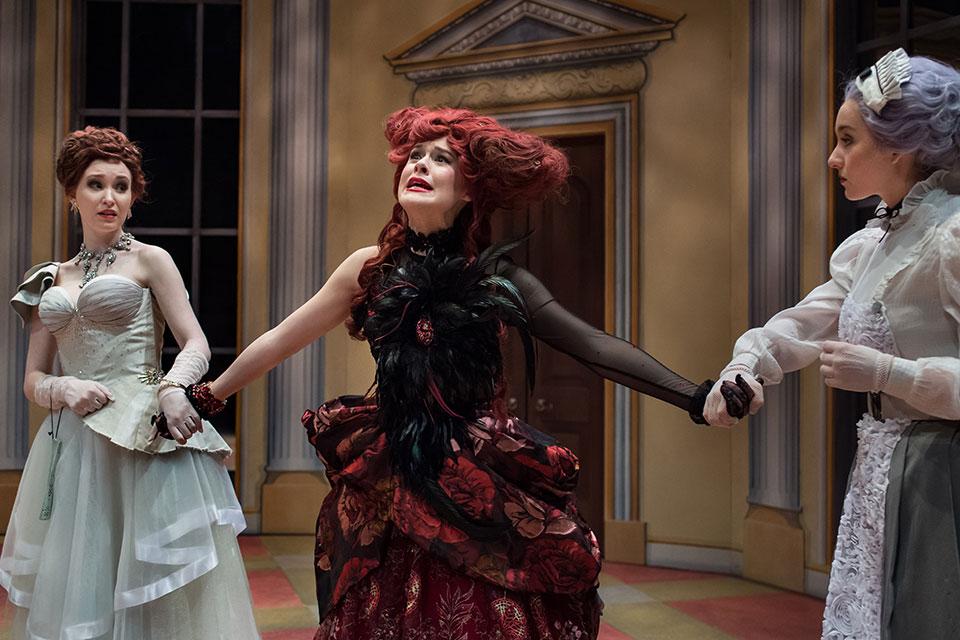 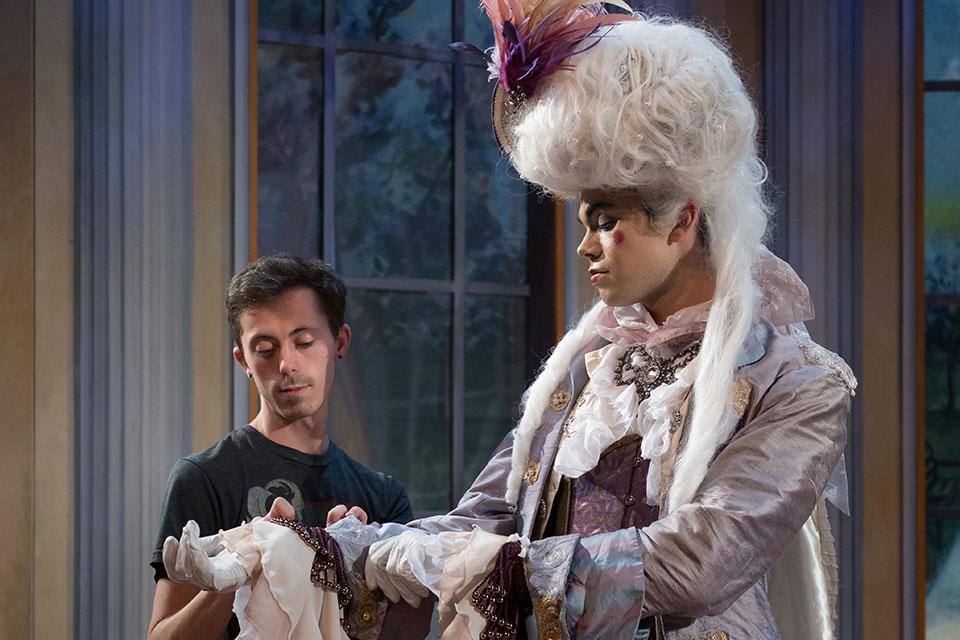 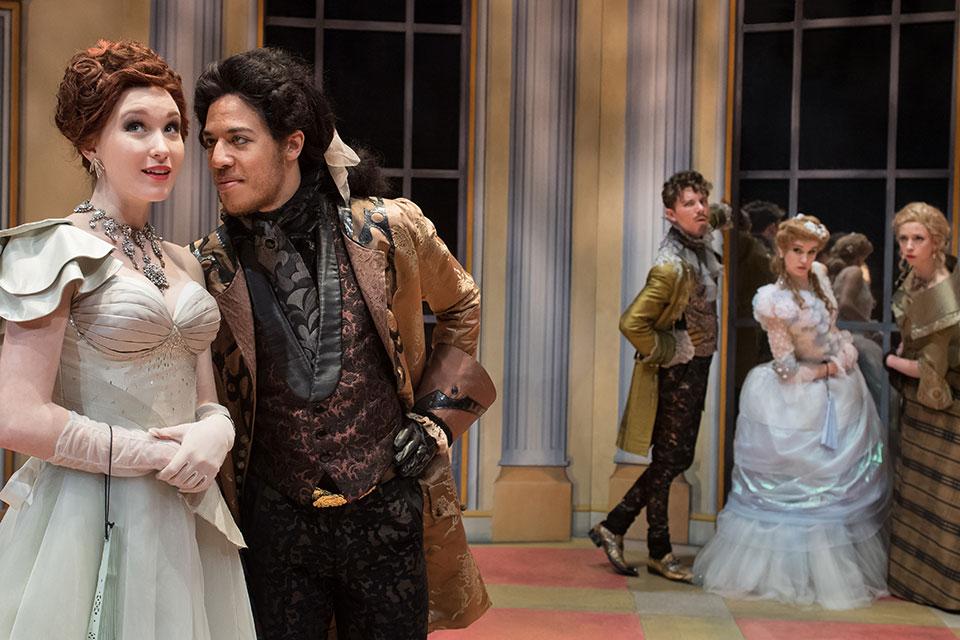 When Jeffers first read the script, he realized the challenge immediately: “How do you take an older work and find relevance to a modern audience?” he asked himself.

Berger, the founding artistic director of Red Bull Theatre in New York City (with a special focus on Jacobean-era plays of Shakespeare and his contemporaries), wanted to add some modern style but gave the designers plenty of room to get creative.

The challenge became more engaging for Jeffers and Young as they researched and emphasized the elements of the Jacobean-era that are still around today. “It’s definitely a period piece,” says Young, “but all of these types of people still exist. We just put a modern twist on it.”

Jeffers, an avid follower of couture and the avant-garde, let the world of fashion be his guide. “In The Man of Mode, all of the characters are so heightened; high fashion and couture are heightened, so it was a perfect fit.”

And the trail of glitter led right to two of the play’s most outlandish characters: Sir Fopling Flutter and Mrs. Loveit. Sir Fopling (the “man of mode”), recently returned from the Paris fashion scene, is eager to impress his young contemporaries with his stylish new look, while Mrs. Loveit’s already fiery personality is further inflamed by a jealousy-inducing lover.

A little something 'extra' 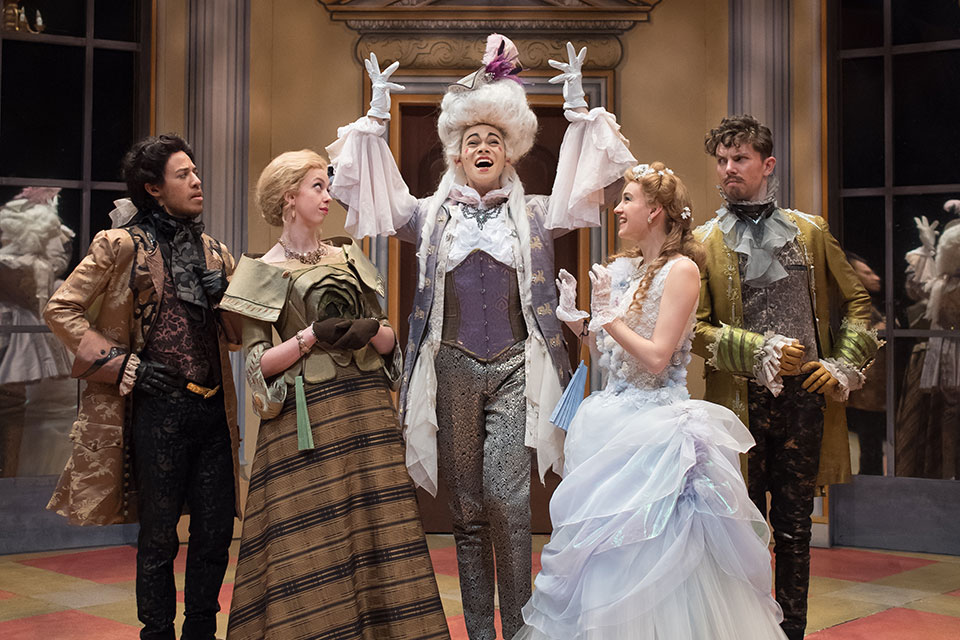 The influences of high fashion can be seen in the monochromatic color palette of Sir Fopling’s wardrobe, Jeffers says. But what really helped Sir Fopling stand out were the extras—his flashy, gaudy accessories, period-accurate makeup and of course his wig, which stood at an impressive 12 inches tall, after being cut down from a staggering 18.

Young says big wigs (often propped up with sticks), rosy cheeks and painting the center of one’s lips were fashion trends at the time, so Fopling’s look is not so much a departure from, as an homage to, the time. 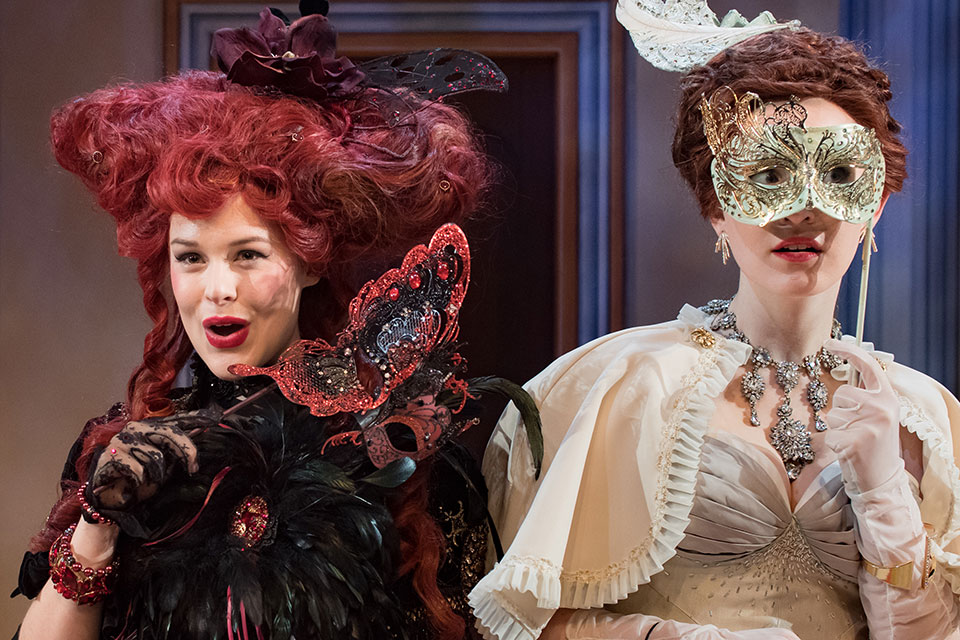 Many of the characters in the play are driven by a particular emotion. No one who saw The Man of Mode could argue that Mrs. Loveit’s personality burned bright red with passion and rage—from head to toe. “She was such a bold character,” Young says, “we wanted her whole being to be a statement.”

Her heart-shaped wig consisted of five different hair colors and took about 50 hours for Young and fellow student Morgan Sellers to build.

For Jeffers, there was no question about putting the fiery Loveit in red. “I played with her look a lot,” he says. “I knew she needed feathers and a lot of movement.” 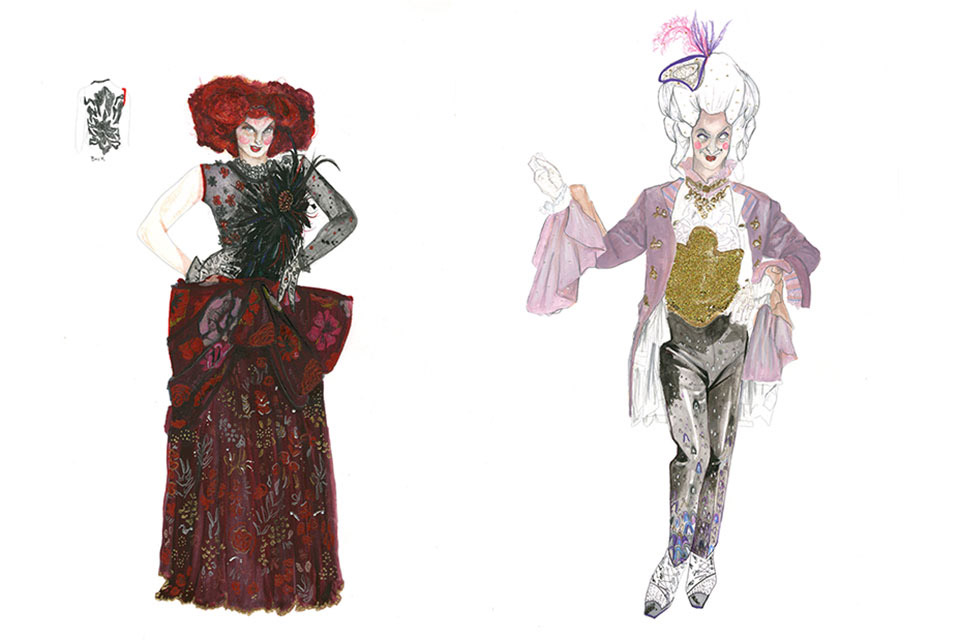 For Young and Jeffers, both seniors, working on The Man of Mode was a culmination of their experiences as designers at UNCSA, bringing together the creativity, collaboration and responsibility they’ve cultivated over the last four years.

As a designer, Jeffers says, “your work makes you responsible for so much visual weight. Emily and I communicated a lot, and we worked closely with Jacob Harbeck, the scene designer.” It was very fulfilling, he adds, to see the final production come together.

“There is nothing better than making an actor feel beautiful,” he says. “It’s intoxicating.”

Jeffers and Young both graduate in May. He will be working as a wardrobe specialist for Norweigan Cruise Line and she will join Penny Lane Studios in Chicago, where she will be making medical wigs and styling wigs for theatre.