UNCSA Symphony Orchestra starts the season with music and film

University of North Carolina School of the Arts (UNCSA) Symphony Orchestra kicks off its 2017-18 season with what Music Director Christopher James Lees describes as “a uniquely enticing journey combining colorful and decidedly current elements.” This concert of American-influenced works will be held at 7:30 p.m. on Saturday, Sept. 23 at the Stevens Center, 405 West Fourth St. in downtown Winston-Salem.

The repertoire features “If on a winter’s night a traveler” by Alan Fletcher with accompanying film by Bill Morrison; “Concerto for Alto Saxophone and Orchestra” by Paul Creston, which features new UNCSA faculty member Robert Young; and Antonìn Dvorák’s Symphony No. 9 “From the New World.”

First on the program is a collaboration between prolific American composer Alan Fletcher and award-winning American filmmaker Bill Morrison. “If on a winter’s night a traveler,” inspired by a 1979 novel by Italian author Italo Calvino, has the orchestra performing a rich tone poem by Fletcher alongside Morrison’s accompanying film.

“The music and film travel together through time,” says Lees. “The two creative expressions are coordinated and choreographed to ensure a smooth, thought-provoking experience for the audience.”

This piece has only been performed twice before: at its 2015 premiere at the Aspen Music Festival, and again by the Rochester Philharmonic in New York last year.

UNCSA saxophonist Robert Young displays his “wildly virtuosic technique and breathtakingly sweet sound” at the Stevens Center for the first time with “Concerto for Alto Saxophone and Orchestra” by Italian-American composer Paul Creston. Lees touts that “Dr. Young’s performance of this piece will leave our audience amazed at what is possible on the instrument and will showcase his inimitable skills, which we’re lucky to have here in Winston-Salem.” 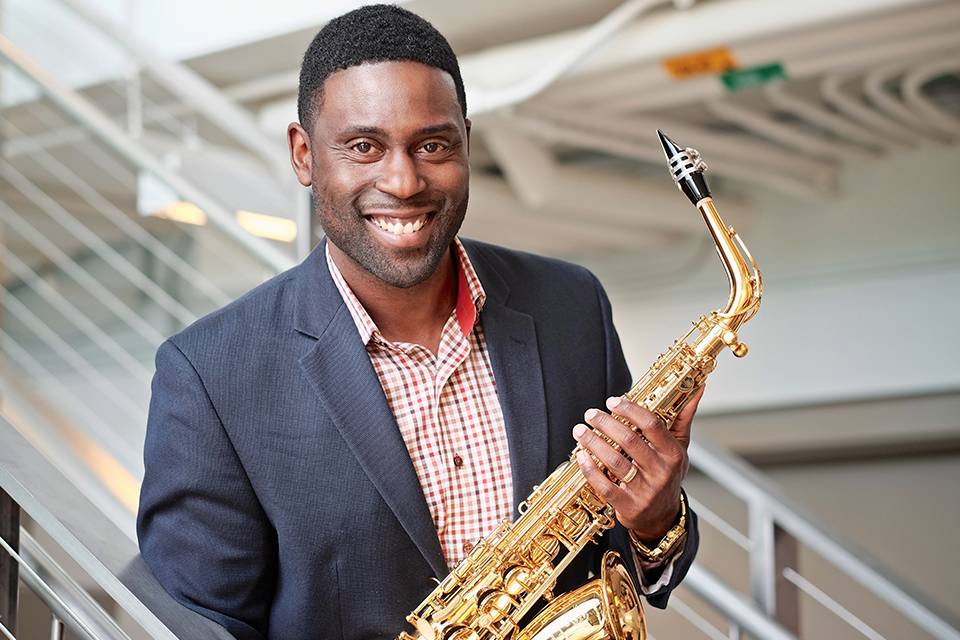 Closing out the concert is Dvorák’s Symphony No. 9 “From the New World,” which the Bohemian composer wrote during his three years as head of the National Conservatory of Music in America in New York City. Lees is thrilled to bring this immensely popular classical work to the stage with the School of Music’s talented orchestral students. “Even if you’ve heard the piece dozens of times, you haven’t heard it in the hands, hearts and minds of the UNCSA students,” he says.

“The caliber of UNCSA’s musicians is what makes innovative concerts such as this one possible,” reflects Dean of Music Brian Cole. “Christopher James Lees dreams big when it comes to the Symphony Orchestra. Our students step up to the challenge to bring new works to life, revitalize old ones and present audiences with the highest-quality music performances possible.”

The UNCSA Symphony Orchestra will also perform at 3 p.m. Sunday, Sept. 17, at Elkin High School’s Dixon Auditorium, in a fundraiser for that school system’s music and arts programming. While admission is free, the school system will be taking donations.