Renovation of Stevens Center moves a step closer to reality

The University of North Carolina School of the Arts (UNCSA) moved one step closer to renovating the Stevens Center in downtown Winston-Salem today when its Board of Trustees unanimously approved a concept master plan for the facility built in the 1920s at the corner of Fourth and Marshall streets.

The preliminary plan lays the groundwork for turning the aging facility, which was last renovated in 1983, into a world-class performing arts venue that benefits the students who train and perform there; partner organizations such as the Winston-Salem Symphony, Piedmont Opera and the National Black Theatre Festival; and the local economy. 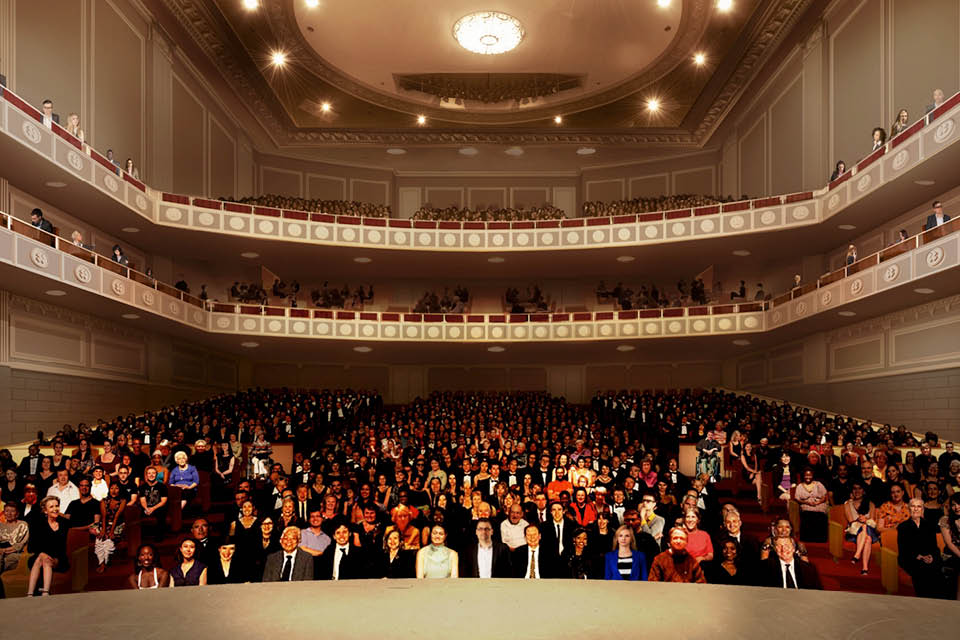 An architect's rendering of how the Stevens Center auditorium might appear after renovations.

Chancellor Lindsay Bierman, who presented the plan developed by world-renowned Robert A.M. Stern Architects (RAMSA) of New York in conjunction with DLR Group of Charlotte, cautioned that actual renovation is still years away. “This concept master plan provides a detailed analysis of existing conditions, reflects the ‘must-haves’ of most campus and community stakeholders, and outlines realistic cost estimates to bring the facility up to current industry standards and building codes,” Bierman said. “But it’s much too early in the process to think about construction documents or detailed floor plans. We have to figure out how to pay for it first!”

Bierman sees the Stevens Center as the anchor of a downtown arts and entertainment district. “Performing arts centers drive economic growth in cities,” he said. “Here in the ‘City of Arts and Innovation,’ I’d like to see UNCSA lead the branding and development of a vibrant ‘Arts Quarter’ to complement what Wake Forest University has done so brilliantly and beautifully in the city’s Innovation Quarter.”

Bierman also noted that the Stevens Center renovation supports two of UNCSA’s five strategic goals: enhancing our living and learning environment, and catalyzing arts-based community and economic development. “Our vision aligns closely with UNC System priorities to increase economic and cultural impact and support student success,” he said. “It’s important to remember that the building serves as our largest classroom and creative incubator. Like any university laboratory, it must be kept up-to-date with state-of-the-art equipment.”

Cutting-edge facilities improve student learning outcomes, no doubt. But a renovated venue will elevate the audience’s experience to a modern standard. We can’t hope to attract and sustain new ticket-buyers if we can’t meet their expectations. We’re developing plans to expand and diversify our programming, and attract more people downtown and to Forsyth County.

Bierman sees the renovation as a win-win-win—for students, local arts organizations, and North Carolina taxpayers. “Cutting-edge facilities improve student learning outcomes, no doubt,” he said. “But a renovated venue will elevate the audience’s experience to a modern standard. We can’t hope to attract and sustain new ticket-buyers if we can’t meet their expectations. We’re developing plans to expand and diversify our programming, and attract more people downtown and to Forsyth County.

“There would be a profound ripple effect through increased spending on restaurants, hotels, and parking,” he added. “Our ‘Nutcracker’ performances alone attract more than 13,000 audience members a year, which drives hospitality revenue downtown.”

A recent study by Americans for the Arts revealed the nonprofit arts and culture industry generates $2.12 billion in direct economic activity in North Carolina, supporting almost 72,000 full-time equivalent jobs and generating $201.5 million in revenue for local governments and the state of North Carolina. Locally, nonprofit arts and cultural organizations spent almost $105 million during 2015, leveraging $52 million in additional spending by their audiences – spending that pumped revenue into restaurants, hotels, retail stores, parking garages, and other local businesses.

Soon, Wiley Hausam, UNCSA’s new Managing Director of Performance Facilities, will launch a market study by a leading national firm to learn what’s changed in the market in recent years and what program mix is most attractive to potential ticket buyers. “We very much want to hear from key stakeholders in the community about what they are interested in,” Hausam said.

“We will never compete directly with venues like Durham Performing Arts Center (DPAC), the Blumenthal in Charlotte, or the planned Tanger Center in Greensboro, which are much larger,” Hausam added. “Nor will we compete with programming currently offered by our partners.”

DPAC and the Blumenthal both offer in the neighborhood of 2,000 seats, and the Tanger Center, planned to open in 2019, will seat 3,000. By contrast, the current seating capacity of the Stevens Center is 1,366, and the concept plan will reduce seating to 1,024 seats, increasing two levels of seating to three (including a “necklace-style” mezzanine composed of modular boxes), with more leg room and street-level access to orchestra-level seating.

“The seasons in Durham and Charlotte are wide-ranging and commercial, with large Broadway series,” Hausam said. “Because their theaters are large and completely devoted to and available for this kind of stage entertainment, they are in an essentially different business than the Stevens Center.”

There is a viable and financially sustainable niche of more intimate series programming that can be offered at the Stevens Center to boost the local economy and the cultural life of Winston-Salem and Forsyth County. A greater range of offerings will attract new audiences who are not currently being served. A vibrant and exciting program will enhance the image of the city.

“There is a viable and financially sustainable niche of more intimate series programming that can be offered at the Stevens Center to boost the local economy and the cultural life of Winston-Salem and Forsyth County,” Hausam said. “A greater range of offerings will attract new audiences who are not currently being served. A vibrant and exciting program will enhance the image of the city,” he added.

The next step, Bierman said, will be to shore up the Stevens Center’s crumbling terra cotta façade, remove the temporary scaffolding, and then permanently restore the terra cotta. “We want to restore the historic character and charm of the building,” Bierman noted, “and RAMSA’s plan does that with sensitivity and restraint.”

With both the concept plan and the market study, UNCSA will then seek to identify funding from a combination of state, city and county sources, in addition to individual donors and foundations. “We can’t count on state funding alone to cover the costs. We’ll only get this done as a public-private partnership,” Bierman said.

“Since its early days as a movie theater, the Stevens Center has enriched the cultural life of our community for nearly a century. Its transformation is vital not only to our students, but also to our local economy: It will stimulate further development downtown and attract new businesses to call Winston-Salem home,” he added. “The Stevens Center defines our great city as much as it serves the university.”

Finally, UNCSA will develop a detailed project timeline with an eye toward minimizing the time the Stevens Center will be closed, which could be up to 18 months. The school has already reached out to other venues and presenting organizations that could accommodate performances and productions during the down time. 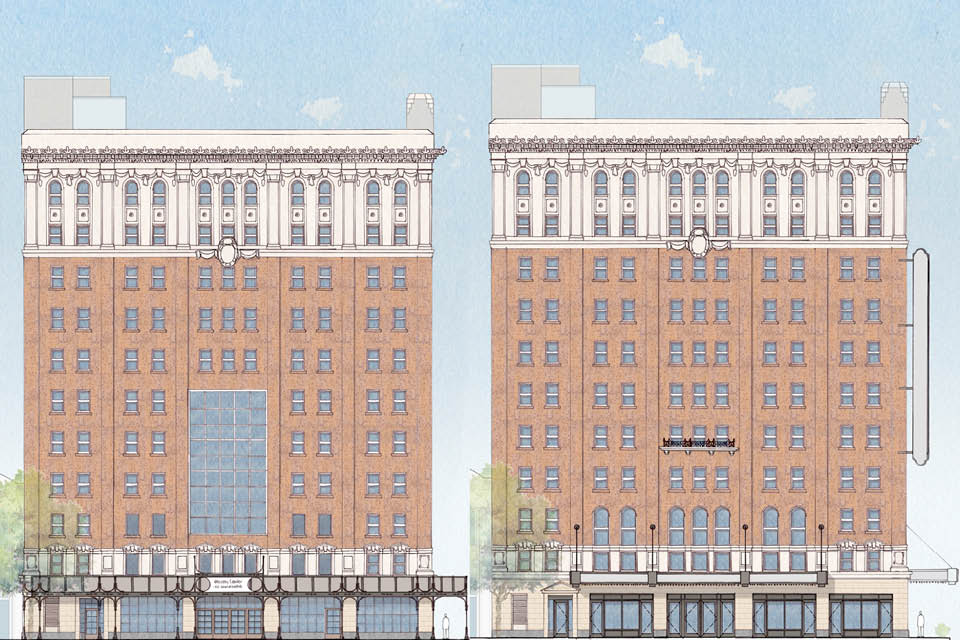 Architect's renderings of the current facade of the Stevens Center (left) and following renovations (right).

Additional components of the concept plan include:

The Stevens Center Master Plan was developed at a cost of $300,000 from private donors and UNC Strategic Initiative Funds. RAMSA associates met with campus constituents, patrons and representatives of local art and nonprofit organizations to research the facility and develop the plan.

Opened in 1929 as the Carolina Theatre, the building had a 2,500-seat capacity and was used for movies and live performances with notable celebrity appearances, including Helen Keller in 1939 representing the American Foundation for the Blind and the State Lions Convention, and Elvis Presley in 1956, performing to a sell-out crowd prior to achieving fame.

The Carolina Theatre changed ownership several times between its dedication in 1929 and its closing in 1975. In 1980 the building was donated to the North Carolina School of the Arts (now UNCSA) by Piedmont Publishing. The school renovated the facility at a cost of $9.6 million funded by a combination of federal, state and private donations. It was rededicated on April 22, 1983, and renamed in honor of Broadway producer and arts patron Roger L. Stevens. Guests attending the rededication gala included Leonard Bernstein (who conducted the UNCSA Symphony Orchestra), Isaac Stern, Agnes de Mille, Gregory Peck, President Gerald R. Ford and First Lady Betty Ford, former First Lady Lady Bird Johnson, Maya Angelou and Governor James B. Hunt.