The Broadway revival cast of "Once On This Island." / Photo: Dia Dipasupi

Broadway revival "Once On This Island" spotlights work of UNCSA alumni

Eight times a week, the cast of “Once On This Island” brings it all to the stage, mounting a production that the New York Times called a “ravishing revival.” The secret ingredient? It might be pickles.

Five UNCSA alumni are part of the production, which opened in December 2017. The musical is a revival of a show that made its Broadway debut in 1990. Drawing from elements of “Romeo and Juliet” and “The Little Mermaid,” the show tells the story of two people from different social classes who find love despite obstacles. “It’s a story of love and community,” says the show’s choreographer Camille Brown (Dance ’01).

The New York Times described Brown’s vision for “Once On This Island” as “electric choreography.”

“In preparing for ‘Once On This Island,’ I focused on combining the richness of Afro Haitian and Afro Cuban culture, and incorporating those cultures into the movement,” Brown says. She became interested in choreography while attending UNCSA. “I was not considered to have the ‘ideal dancer’s body’ when I was in school. I was actually going to transfer but my mom asked me to hold off and find something I loved, and that was choreography.” Brown has her own dance company, Camille A. Brown & Dancers, and is choreographing the upcoming “Jesus Christ Superstar LIVE!” for NBC.

While she has worked with other UNCSA alumni, Brown says it has never been to the extent of the number of individuals involved in this show.

T. Oliver Reid (Music ’93) says while he has worked with numerous alumni over the years, they have typically been Design & Production graduates. “It’s rare to be in a show where there are this many alumni involved,” he says. “It’s great when you walk into the room and hear someone say ‘Go Pickles!’”

It’s rare to be in a show where there are this many alumni involved. It’s great when you walk into the room and hear someone say ‘Go Pickles!’

Reid, who is the show’s dance captain and performs as swing for all the male principal roles, says there’s a strong fellowship among the UNCSA alumni performers. He and Tony nominee Phillip Boykin (Music ’90), who plays TonTon Julian (a lead), attended UNCSA at the same time. “It’s fun for Phillip and me to perform together and alongside someone like Isaac Powell, who recently graduated. We all bring different perspectives, but still have a lot in common because of our shared educational experience.”

Powell, who graduated from the School of Drama in 2017, was cast in “Once On This Island” as a lead just a few months after graduation. “It’s really cool to have this network of people who have been through similar experiences at UNCSA—the foundation that led us to this show,” he says. “We feel this sense of community and Pickle pride… a connection.” 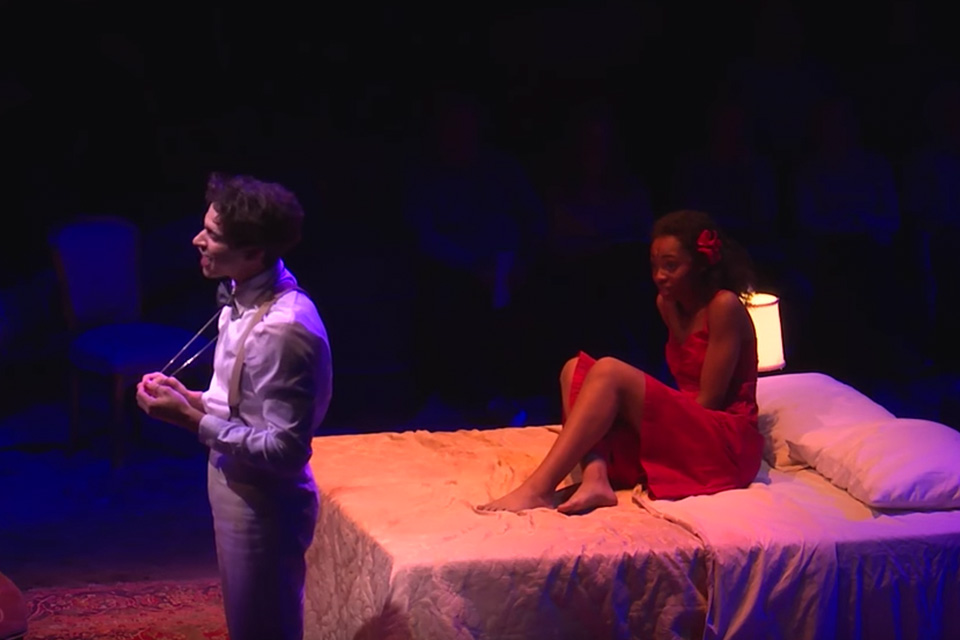 Watch an excerpt of Isaac Powell performing "Some Girls" from "Once On This Island."

Mary Kathryn Flynt (Design & Production ’04) is stage manager for “Once On This Island.” She says she booked her first job in New York because she reached out to a frequent UNCSA guest artist, Peter Lawrence. “I can’t tell you how many people I run into who have some sort of connection to UNCSA,” she says.

As stage manager, she and her colleagues work as “mission control,” making sure everyone backstage and in the house have what they need for a successful show, from securing costume pieces to calling out cues. This perspective allows her to see her fellow alumni shine.

“It’s interesting because most of us were at the school during different time periods, but you really see the training shine through,” Flynt says. “From Philip’s incredible voice to Isaac’s enthusiasm, Camille’s choreography to T.’s ability to step in and dance any role—I’m really proud of all of them.”

Editor's Note: Throughout the Broadway run of “Once On This Island,” seven UNCSA alumni worked as members of the cast or crew. In addition to the five mentioned in this story, Courtnee Carter (Drama ’16) and Allan K. Washington (Drama ’13) performed in the show in 2018.