A new play directed by University of North Carolina School of the Arts (UNCSA) alumna and Thomas S. Kenan Institute for the Arts Executive Director Corey Madden is garnering national attention as part of a movement toward inclusivity in the American theater.

DeLanna Studi’s powerful memoir play “And So We Walked: An Artists Journey Along the Trail of Tears,” is inspired by the story of a contemporary Cherokee woman who embarks on a six-week, 900-mile journey along the Trail of Tears to understand her own identity and the conflicts of her nation. Featuring a UNCSA-based creative team, the play runs through May 13 at Portland Center Stage in Portland, Ore.

Prior to its opening, the Portland production of “And So We Walked” was featured in American Theatre magazine, the nation’s only general-circulation magazine devoted to theatre. Studi appeared on the cover of the magazine’s April issue to illustrate a story about three productions written by Native American women being staged in Oregon this spring. 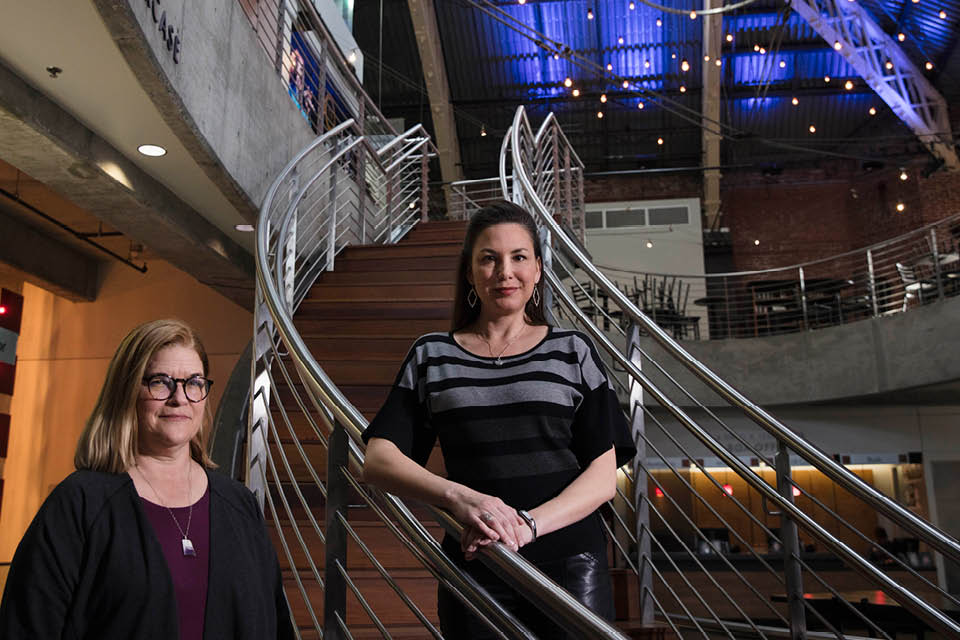 Corey Madden, left, directs "And So We Walked: An Artist's Journey Along the Trail of Tears," written and performed by DeLanna Studi, right. / Photo: Kate Szrom, courtesy of Portland Center Stage at The Armory

“I am honored to be a part of this ongoing journey with DeLanna in telling her story, and we’re proud that the Kenan Institute and the UNC School of the Arts has had the opportunity to help bring her vision to fruition and now present it on a national stage,” Madden said.

“Our mission at the Kenan Institute is to encourage artists to explore and develop new ways to approach the creative challenges faced by their community. ‘And So We Walked’ is a compelling story of how modern Native populations face the trauma of their histories.”

Broadway World.com called the show in Portland “intensely powerful.” Writer Krista Garver said the play “is woven together wonderfully. It moves seamlessly back and forth in time and between real life and the world of myths, legends, and dreams. It's clear at every moment that this is a very personal play.”

Studi, who joined her fellow playwrights for a series of panel discussions hosted by Portland Center Stage, said, “As a Cherokee citizen and woman, I have always dreamed about retracing my ancestors’ footsteps along their forced deportation from their ancestral homelands in North Carolina to our current home in what is now called Oklahoma, collecting stories along the way. While the Trail of Tears is a defining moment in our Cherokee history, it does not define who we are. ‘And So We Walked’ is a universal story about the complexities of identity, reconciling the past while living in the present, and the importance of keeping our stories alive.”

"And So We Walked" is woven together wonderfully. It moves seamlessly back and forth in time and between real life and the world of myths, legends, and dreams. It's clear at every moment that this is a very personal play.

“And So We Walked: An Artist's Journey Along the Trail of Tears”  is a frank, funny story of a contemporary Cherokee woman who retraces the path her great-great grandparents took in the 1830s from North Carolina to Oklahoma, during the forced relocation of 17,000 Cherokee from their homelands. As many as 6,000 Cherokee perished along the way. Through this personal odyssey, her sense of identity — both as a Cherokee and as a woman — is tested by the people and places she encounters. This multi-faceted dramatic memoir draws on extraordinary interviews, historical research, and the artist’s personal experiences to convey the complexities and conflicts with which the Cherokee wrestle.

In 2014, with support from the Arts and Society initiative of UNCSA’s Kenan Institute for the Arts, Studi began initial research in North Carolina, Tennessee and Oklahoma, eventually discovering her ancestral homestead in present-day Murphy, N. C., on the Hiwassee River. The following year, she conducted interviews and participatory theater workshops as she traveled along the Trail of Tears with her father, Thomas Studie, a Cherokee elder and native speaker.

In November of 2015, Studi developed the play while in residency with University of North Carolina at Chapel Hill’s Process Series and with Native Voices at the Autry Museum in Los Angeles.

In 2016, “And So We Walked” was chosen for Native Voices at The Autry’s 16th Annual Playwrights Retreat and Festival of New Plays and was further developed at Native American Theatre Project with support from the Cherokee Preservation Foundation. Studi received the Butcher Scholar Award from the Autry Museum of the American West. Workshops developing “And So We Walked” at the American Indian Center and PlayMakers Repertory Company at the University of North Carolina at Chapel Hill, and a production at Triad Stage in Greensboro in 2017 were supported by funding from the MAP Fund and the Kenan Institute for the Arts.

The production was designed by a UNCSA faculty and an alumna, based on an abstract interpretation of the Cherokee Council House and inspired by Cherokee craft art, with intricately lit fabric woven between trees against an abstract backdrop that is reminiscent of the mountains that are considered sacred space in Cherokee Nation. The council house, where ceremonies and tribal meetings are held, is seven-sided to represent the seven clans of the Cherokee: Bird, Paint, Deer, Wolf, Blue, Long Hair and Wild Potato.

About DeLanna Studi, author and performer

DeLanna Studi is a proud citizen of Cherokee Nation. Her acting credits include the first national Broadway tour of “August: Osage County;” off-Broadway’s “Informed Consent” at Duke Theater on 42nd Street; and regional theater credits at Oregon Shakespeare Festival, Portland Center Stage at The Armory (“Astoria: Part One and Two”), Cornerstone Theater Company, Indiana Repertory Theater, and others. Studi has originated roles in more than 18 world premieres, including 14 Native productions. She has done more than 800 performances of the Encompass Compassion Play “KICK,” a one-person show written by Peter Howard that explores the power of images, stereotypes and Native American mascots. Her roles in the Hallmark/ABC mini-series “Dreamkeeper” and Chris Eyre’s “Edge of America” have won her numerous awards. She is an ensemble member of Native Voices at the Autry; serves as chair of SAG-AFTRA’s National Native Committee; and mentors for Mentor Artist Playwright Program, Young Native Playwrights and American Indian Film Institute’s Tribal Touring Program.

Corey Madden has worked as a creator, director and/or producer on more than 300 new works that have premiered across the country and in Europe. Through her company L’Atelier Arts, Madden develops and directs new plays, creates original programming for museums and arts festivals, and collaborates with dance, visual arts, music and opera artists on interdisciplinary and site-specific projects. Recent original works include “Sol Path” and “Rain After Ash,” commissioned by Fulcrum Arts’ AxS Festival; “Tales of the Old West” for the Autry Museum of the American West; and “Rock Paper Scissors” (Best Production, Arizona Theatre Awards) and “Day for Night” (GLOW Festival in Santa Monica; Transatlantyk Festival in Poland). Madden is currently executive director of the Kenan Institute for the Arts at the University of North Carolina School of the Arts and has been associate artistic director of the Center Theatre Group/Mark Taper Forum, producing director of Performing for Los Angeles Youth, director of Artist Programs for the Pasadena Arts Council, and on the artistic staff of Actors Theatre of Louisville.