When people think “going green,” it usually means recycling or biking to work. School of Filmmaking students decided to take it one step further with their third-year film, “Curls.” As the future of the film industry, these innovative students, including a crew of over 60 and an Eco-Management team, set their sights on obtaining the EMA Seal for their film.

The EMA Green Seal is a recognition program honoring progress in sustainable production. Determined on a scale of 200 points, films can submit with a minimum of 75 points to receive the Green Seal recognition. To recognize films that go above and beyond, the program has recently introduced the EMA Gold Seal for projects that score 125 points or more. And since going above and beyond is synonymous with the Fighting Pickle, Gold is exactly what “Curls” achieved.

“Curls” tells the story of Caitlin, a young mixed-race girl who turns to Irish Dance in an attempt to connect with her late mother. When she doesn’t fit in with the rest of her class, she must learn to embrace herself to succeed. 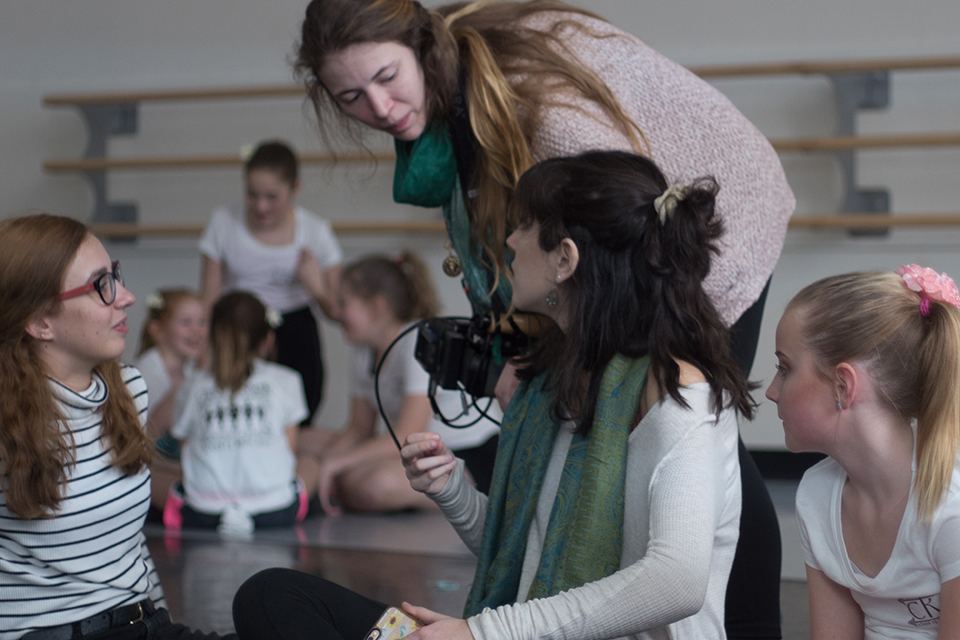 We caught up with the production team for “Curls” to learn a little more about the inspiration behind striving for the seal. Below, Trent Spivey (’18), co-sustainability manager; Meg Cowen (’21), co-sustainability manager; Thatcher Welden (’20), co-producer; Emily Padgett (’20), co-producer and Michelle DeGrace (’19), director, share their story and how they hope to impact future pickle films:

Why did you pursue the EMA Green Seal?

Cinema is one of the most influential forms of entertainment in the history of media, but also traditionally one of the least environmentally-friendly. People around the world are consuming and creating filmed entertainment more than ever before, and we have so much potential to shape responsible and sustainable practices in our craft by bringing a sustainable approach to our film sets. A sustainable mindset demands both discipline and compassion for the people and places around us, ultimately empowering us to make better creative choices. We also adopted the mindset that our student films may not be around for long, but their impact on the environment is lasting. The EMA Green Seal is the industry’s top recognition for sustainable filmmaking, and we wanted to challenge ourselves to meet highest possible standard.

What steps did you take to qualify for the seal?

Fortunately, the Environmental Media Association provides loads of resources for filmmakers who want to make their projects sustainably. Meg and Trent, the sustainability managers for “Curls,” were given the EMA’s sustainability handbook by the director and producers, along with the freedom (and appropriate budget) to run with it. They poured over several EMA spreadsheets of information about changes that could be made during pre-production, production and post-production, and followed a point system to figure out our particular path to EMA certification.

Our campus community, particularly Jamie Moore with facilities and the School of Filmmaking production staff, helped us obtain physical resources like recycling bins and compostable cutlery that contributed greatly to cutting down the film’s environmental footprint. As a team, we also realized that one of the most significant parts of our mission was to engage the crew: if we wanted them to operate sustainably, we had to get them to care. Along the way, we also made sure to document what we were doing so that every film at UNCSA will now have a handbook for becoming EMA-certified.

To brag on Meg a moment, our film was very small compared to the larger Hollywood EMA projects. Her tenacity/constant phone calls to the EMA are a huge part of why we got the seal!

Do you hope to inspire other student films to pursue the seal?

Absolutely. We knew that it would be fairly straightforward to do a certain amount of work and get the seal, but we made the conscious decision to dig deeper, document and communicate everything we were doing so that even an incoming first-year could work on a UNCSA student film as a sustainability manager in the future. We hope to soon see every film receiving the EMA Green Seal, because we know that the sustainable mindset required by the certification process will carry over into students’ later work and their personal lives outside of film school. Ultimately, the EMA Green Seal is just a vehicle for promoting behavior that will make our industry, communities and planet a better place for our children.

Ultimately, the EMA Green Seal is just a vehicle for promoting behavior that will make our industry, communities and planet a better place for our children.

How do you think qualifying for the seal prepares students for their future in the film industry?

The EMA Green Seal certification process was at times just as much a thought exercise as it was a big to-do list. We had to examine what the existing industry practices were, how they were similar or different from UNCSA practices (they were usually identical) and then do some creative problem-solving to apply Hollywood-grade sustainability solutions to our little film school in North Carolina. For example, big films could choose to rent electric vehicles instead of big SUVs for their location scouts. In our case, it was a matter of picking whose car had the best gas mileage when the crew had to go somewhere!

Sometimes it was just getting the right spoons from Whole Foods, but at other times it came down to doing things like understanding the start-to-finish process of bleaching paper so that we could choose a sustainable paper product. After this experience, we certainly feel confident that we could apply the hands-on learning, communication skills and teamwork demanded by sustainability management to future film sets of any size. And we as a team all hope that every student involved with “Curls,” either in pre-production or on set, have learned more sustainable skills, tools and mindsets to incorporate on future projects.