Jacob Miller, a college freshman in the School of Dance at the University of North Carolina School of the Arts, is the latest recipient of the Gillian Murphy Endowed Scholarship, named for one of the school’s most accomplished alumni.

From Haverhill, Mass., Miller graduated from UNCSA’s high school program last year. He recently performed the roles of Cavalier, Snow King and Dr. Silverhaus in in the annual holiday production of “The Nutcracker.”  He will compete in the Youth America Grand Prix (YAGP) regional semifinals in Winston-Salem this weekend, and is currently rehearsing George Balanchine’s “Concerto Barocco” for Winter Dance, which is Feb. 21-24 at the Stevens Center. 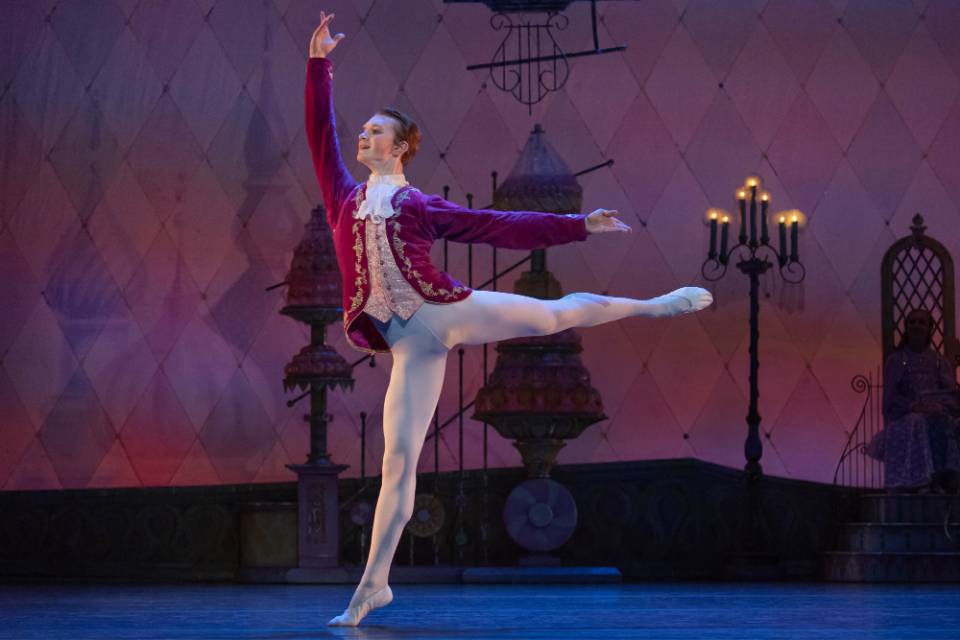 “This is our most prestigious scholarship in the School of Dance,” said Dean Susan Jaffe. “It honors Gillian Murphy not only for her accomplishments, but for the qualities that have led to her success: discipline, hard work and passion for the craft. As a young artist, Jacob embodies those same qualities, and we’re proud to support his dreams with the Gillian Murphy Endowed Scholarship.”

Miller began dance training at the age of 6 and studied classical ballet for two years at Northeast Dance Center in Lawrence, Mass., under the direction of Roshni Pecora. At the age of 15, he competed in the YAGP in Boston. While attending a summer dance intensive at UNCSA, he decided to audition and was accepted for the high school program. Miller completed his junior and senior years of high school at UNCSA.

In addition to his recent roles in “The Nutcracker,” he performed last year in Aszure Barton’s “Happy Little Things” in the Winter Dance Concert and the premiere of Susan Jaffe’s “Carmina Terra” in the Spring Dance Concert.

This is our most prestigious scholarship in the School of Dance. It honors Gillian Murphy not only for her accomplishments, but for the qualities that have led to her success: discipline, hard work and passion for the craft.

Murphy is a 1996 UNCSA high school graduate who is principal dancer with American Ballet Theatre (ABT). The scholarship was established in 2014 through the leadership of  Jaffe, herself a former principal dancer with ABT, and Board of Trustees Chairman Ralph Womble. Donors contributed more than $300,000 in a matter of weeks, reaching halfway to the goal of $600,000 for a fully endowed scholarship. Jaffe and her Dean's Council of supporters then pushed the scholarship fund beyond the endowment mark by nearly $100,000.

In 2016, Murphy came to campus with ABT colleagues including Misty Copeland, Stella Abrera, Isabella Boylston, alumnus Blaine Hoven and James Whiteside. The dancers performed a brief showcase for dance students, took part in a question-and-answer session moderated by Jaffe, and attended an event to raise money for the scholarship.