Senior lighting designers hav collaborated throughout the year the create the Winston-Salem Light Project.

“Lines,” the 11th annual Winston-Salem Light Project (WSLP), explores the impact of urban development and gentrification on individuals and neighborhoods. The public art installation can be viewed from sunset to sunrise daily April 12-25 at the intersection of South Main Street and Waughtown Street, a triangular point of land near the Gateway YWCA.

Conceived, designed and built by graduating seniors from the School of Design and Production at the University of North Carolina School of the Arts, “Lines” features a neighborhood of light centered around a single house typical of those found in the 1940s Belews Street neighborhood of Winston-Salem, a mixed-race, working-class community that was razed in the late ’50s to build U.S. 52. 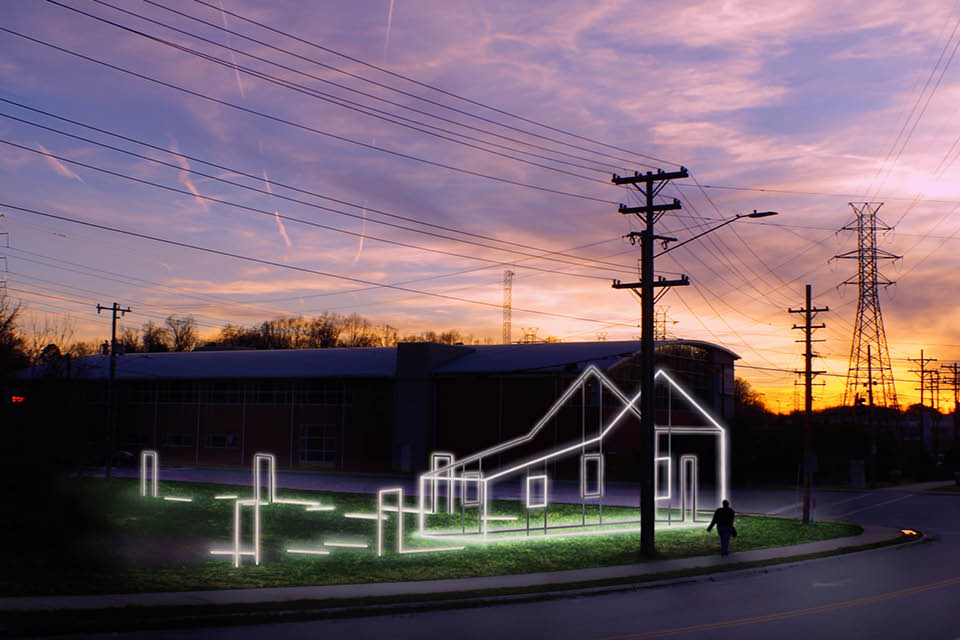 The art installation includes scaled homes constructed three-dimensionally of light to represent the ghosts of communities that have been demolished for a variety of urban renewal projects. Designers were inspired by the work of Italian artist Massimo Uberti, who is renowned for his minimalist sculptural light installations.

UNCSA lighting designers began a year ago to research the impact of the National Housing Act of 1939 and the practice of redlining – systemic denial of services including mortgage lending to residents of specific, often racially associated, neighborhoods. Locally, they studied urban renewal projects like the construction of U.S. 52 that either demolished working-class neighborhoods or isolated them from surrounding, more affluent communities and centers of commerce and government.

“Zoning and the destruction of neighborhoods have worked hand-in-hand with the mobility, or lack of mobility, for people of color,” said student designer Kim Smith, who is from Orlando, Fla. “As a person of color, I think it is important to explore how we can find a balance of improving a larger community without overtaking a smaller one.”

Student designer Brendan Warner, of Point Lookout, N.Y., said, “It’s not something I had ever thought about, and it’s not taught in schools. There is a lot of concrete evidence of how infrastructure updates have caused real problems.”

Urban renewal and discriminatory lending are not the only culprits in disrupting low-income, and often minority, neighborhoods, said Norman Coates, founder and executive artistic director of WSLP, who is director of the Lighting Program at UNCSA. “As artists, we are complicit. We have a history – in cities everywhere – of building studios in impoverished neighborhoods. We’re drawn there by cheap rent and often a diverse mix of cultures,” he said. “The studios expand into galleries, and they attract cafes and shops, and more upscale housing options. The neighborhood becomes gentrified and its residents can no longer afford to live there.”

We got a good look at the community where we’ve spent four years, and we talked about our responsibilities as artists, what we bring to our communities and what we might take away without intending to.

Coates founded WSLP in 2008 to expand his students’ knowledge about light. Students apply concepts and techniques learned in pursuit of theatrical design to architecture and public art, putting aside the script or score and becoming originating artists. With the support of the late philanthropist Phil Hanes and funding from benefactors Suzanne and Gilbert Mathews, Coates and his students have used lighting to explore concepts as diverse as war, time, inner space and outer space, energy, inconspicuous spaces and hidden movement in the urban environment. Locations have included the Millennium Center, the Stevens Center, First Baptist Church, the Strollway and Merschel Plaza.

Coates said this year’s location is a departure from the past. “We’re moving out of downtown, but not too far,” he said, explaining the southside location is appropriate for the theme. “It’s on property owned by the University, situated as we are amidst distinctly diverse neighborhoods like Happy Hill, Sunnyside and Washington Park.”

He said thousands of people pass the location every day on their way to and from work, school, shopping and dining. “People move through this location by private vehicle, public transit, on bicycles, scooters, skateboards and on foot.”

The art installation will be visible to motorists passing by, and pedestrians will also hear a motion-activated soundscape of interviews conducted by WFDD’s David Ford for his recent series “Business 40 Changing Lanes,” which explores the impact of current highway construction on individuals and neighborhoods.

Hannah Fuqua of Sandy Springs, Ga., said research led each of the students to bring design ideas to the table, sparking a lengthy collaboration and opportunities to “break out of the bubble” of the college campus and its conservatory curriculum. “We got a good look at the community where we’ve spent four years, and we talked about our responsibilities as artists, what we bring to our communities and what we might take away without intending to.”

Additional collaborators for “Lines” include lighting designer Dominic DeSalvio of Leeds, Mass., and sound designers Nicholas Albanese and Kiersten Bowman, both of Winston-Salem.