Steven LaCosse, Fletcher’s managing director, is staging the production, which will be sung in Italian with English supertitles. 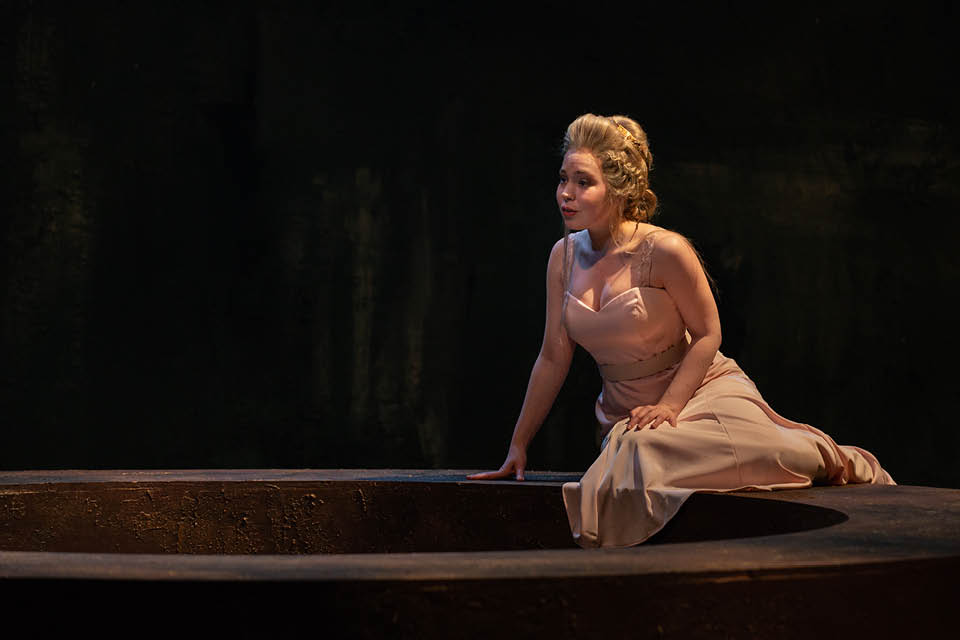 Eliza Mandzik, shown in the April 2018 production of "Impressions de Pelléas," is one of two Fletcher Fellows singing the title role of "Rodelinda." / Photo: Peter Mueller

Eliza Mandzik is one of two Fletcher fellows playing Rodelinda, Queen of the Lombards, along with Claire Pegram. Viktoria Wilmot will play Flavio.

The other Fletcher fellows appearing in “Rodelinda” include Wagner Pastór and James Smidt as Grimoaldo; Andrew René as Garibaldo; Brennan Martinez as Eduige; Mason Taylor as Bertarido; and Kathleen Felty as Unulfo.

School of Music undergraduate voice students rounding out the cast include Katherine Ledbetter as Nurse Maid to Flavio; Jalen Hicks and Evan King as Agents to Grimoaldo; and Carson Weddle and Keegan Welford-Small as Servants of the House of Rodelinda.

Taylor, a countertenor, likened his work on “Rodelinda” to “stepping to a time machine” where, for example, castrati dominated operatic stages and virtuosity manifested itself in such qualities as vocal agility and breath control.

“There is nothing quite like Baroque opera,” he said. “The music can be quite difficult, technically speaking, to execute as these roles were written for specific people in the eighteenth century to showcase what they had within their vocal capabilities. The repertoire doesn’t allow you to push or to strain when singing. You can’t bear down on the voice. You must always be on your toes and always actively thinking about your phrasing and your breath.”

LaCosse echoed these sentiments, pointing out that opera in Handel’s day “was about the singers.” 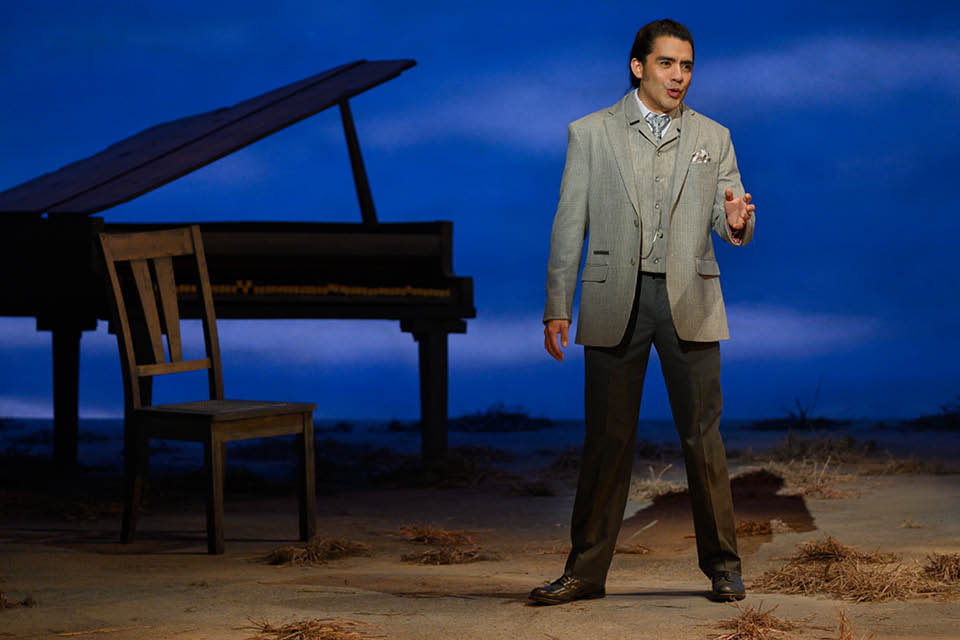 Wagner Pastórm, shown in the February 2019 production of "Werther," will sing the role of Grimoaldo in "Rodelinda." Photo: Peter Mueller

“The singers were the superstars,” he said. “People didn’t expect great drama; they expected great singing.”

At the same time, in the forthcoming “Rodelinda,” LaCosse sees an opportunity “to cultivate the story a bit more.”

“We can dig through those arias and figure out what the emotional journey of the character is or how we can advance the plot through the arias,” he said.

“Rodelinda,” with a libretto by Nicola Haym, premiered 1725 at the King’s Theatre in the Haymarket, London. In it, the mighty Grimoaldo has defeated Bertarido, King of Lombardy, and usurped the throne of Milan. Bertarido is forced to flee the city, leaving his wife, Rodelinda, and his son, Flavio, prisoners of Grimoaldo. As rumors of Bertarido’s death circulate, Grimoaldo plots how to legally take possession of the throne. Meanwhile, a very alive Bertarido makes plans to rescue his wife and son from Grimoaldo’s clutches.

“The story is interesting,” LaCosse said. “It’s about power. It’s about underlings manipulating people in power.”

Lacosse said exposing students to Stubbs’ expertise with repertory will help prepare them for roles in professional opera. “Handel and his contemporaries are very much coming into the repertory. We are very fortunate to have Maestro Stubbs here to work with fellows in the Institute as well as members of our orchestra.”

Angela Vanstory Ward, a principal vocal coach in the UNCSA School of Music, is preparing the production’s singers. They are working with P.G. Hazard, a staff coach/accompanist for the Fletcher Institute and a recent graduate of UNCSA’s Collaborative Piano program, where she studied with Allison Gagnon. 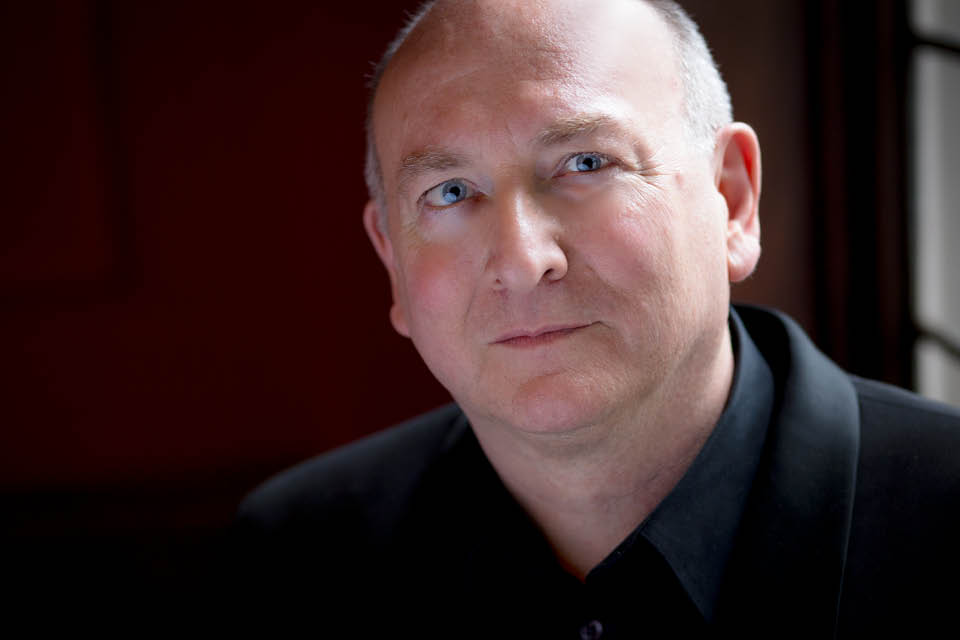 Stephen Stubbs, who won the Grammy Award as conductor for Best Opera Recording 2015, spent a 30-year career in Europe. He returned to his native Seattle in 2006 as one of the world's most respected lutenists, conductors, and baroque opera specialists.

In 2007 Stubbs established his new production company, Pacific MusicWorks (PMW), based in Seattle. He is the permanent artistic co-director of the Boston Early Music Festival (BEMF), recordings of which were nominated for five Grammy Awards. Also, in 2015 BEMF recordings won two Echo Klassik awards and the Diapason d’Or de l’Année.

In addition to his ongoing commitments to PMW and BEMF, recent appearances have included Handel’s “Giulio Cesare” and Gluck’s “Orfeo” in Bilbao, Mozart’s “Magic Flute” and “Cosi fan Tutte” in Hawaii and Handel’s “Agrippina” and “Semele” for Opera Omaha. He has conducted Handel’s “Messiah” with the Seattle, Edmonton and Birmingham Symphony Orchestras.

His extensive discography as conductor and solo lutenist includes well over 100 CDs, which can be viewed at stephenstubbs.com, many of which have received international acclaim and awards.

In 2013, Stubbs was appointed senior artist in residence at the University of Washington School of Music.