Anne and Steve Sessions are the 2019 recipients of the prestigious Giannini Society Award from UNCSA. The award was presented during University Commencement on May 4 in the Stevens Center.

The Giannini Society was established in 1989 and was named in honor of Vittorio Giannini, a founder and the first president of the School of the Arts. It is a group of dedicated ambassadors who provide leadership annual support for the training of UNCSA students. 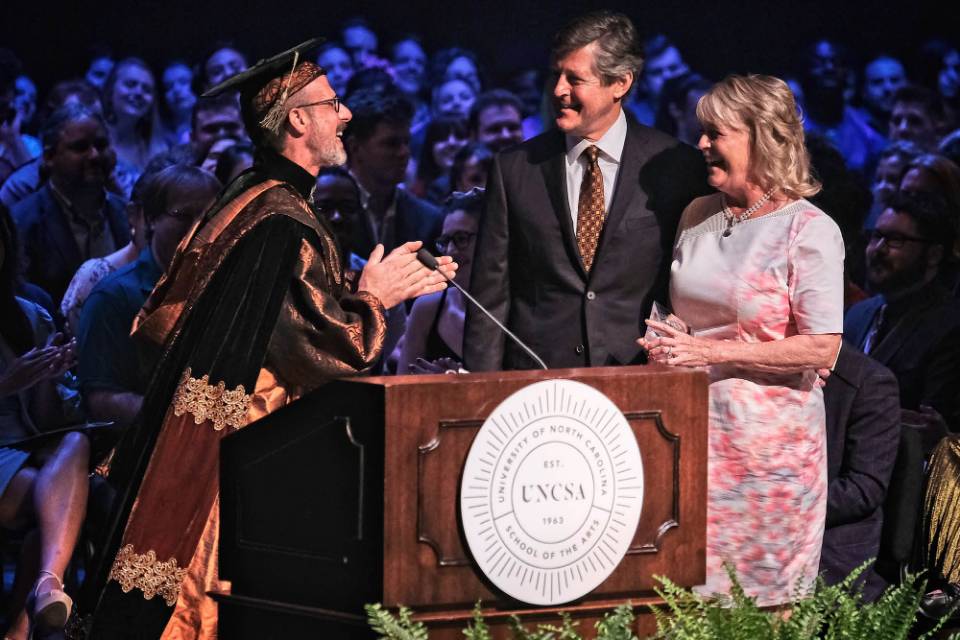 Chancellor Lindsay Bierman presented the Giannini Award to Steve and Anne Sessions at University Commencement on May 4. / Photo: Allen Aycock

The award is given annually to members of the society in recognition of their service and support. Previous recipients include founders, board members, alumni, volunteers and former chancellors and faculty members.

“Anne and Steve care deeply for UNCSA and its students,” said Chancellor Lindsay Bierman. “We are so grateful for the generosity they demonstrate with their time, talent, and resources. We are a stronger university thanks to their support and advocacy.”

For decades, the Sessions have been dedicated to improving the quality of life in Forsyth County and promoting the arts, community development, and public health in North Carolina.

Anne and Steve care deeply for UNCSA and its students. We are so grateful for the generosity they demonstrate with their time, talent, and resources. We are a stronger university thanks to their support and advocacy.

They first heard about UNCSA through friends and connections with North Carolina Dance Theatre. While dance may have been what connected them to the school and students, they quickly became advocates and supporters of the entire university. They have been members of the Giannini Society for two decades.

In addition, they have been members of the Giannini Advisory Committee since 2006 and were chairs from 2007-2010. Both have served on the Board of Visitors, with Anne serving as chair in 2017. Anne has also been a member of the board of The Associates — a group of dedicated volunteers dedicated to advancing UNCSA and the well-being of its students —for more than 20 years. She currently serves as co-chair of the Behind-the-Scenes committee.

“Anne and Steve have supported every aspect of the UNCSA experience,” said Edward J. Lewis, III, Vice Chancellor for Advancement. “They have even allowed their farm in Advance to be used as a location for student films. They love the arts and care for our students, and we are grateful that they are a part of our university family.”

In addition to their service at UNCSA, Anne served on the N.C. Dance Theatre Board for 10 years and the Arts for Life board for 15 years. Steve has served as president of the Clemmons Rotary Club, the Cancer Services Board and the Clemmons Community Foundation. Both are active members of the River Oaks Community Church.  Anne owned A New Leaf interior landscaping company for nearly 40 years, and Steve is the CEO of Sessions Specialty Co., a third-generation wholesale distributor.

The college sweethearts met at N.C. State University and married in 1974. Steve is originally from Winston-Salem and Anne from Madison, Ga. They have two children and three grandchildren.