Each year, the School of Music faculty selects a rising fourth-year student as the recipient of the Presser Undergraduate Scholar Award, which is designed to encourage and support the education of a music student who exemplifies high academic and musical accomplishment, leadership and citizenship.

The 2022 recipient is Jake Anderson – a fourth-year undergraduate student from Boise, Idaho, who appreciates the cello and the outdoors with seemingly equal versatility and passion. An accomplished musician with a taste for chamber music, Anderson also loves the outdoors. During summers, he works as a river raft guide; during fall break, he spent four days biking 409 miles of North Carolina’s Blue Ridge Parkway with friends. On weekends, he will sometimes head to local attractions such as Pilot Mountain or Hanging Rock state parks for hiking or trail running. 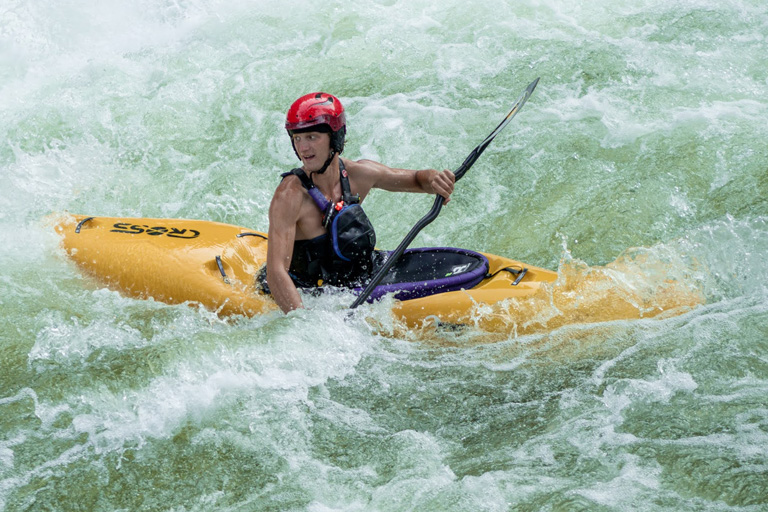 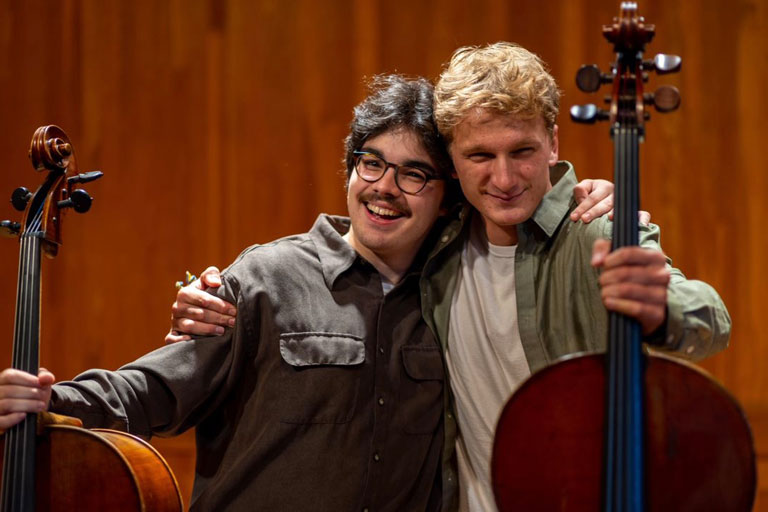 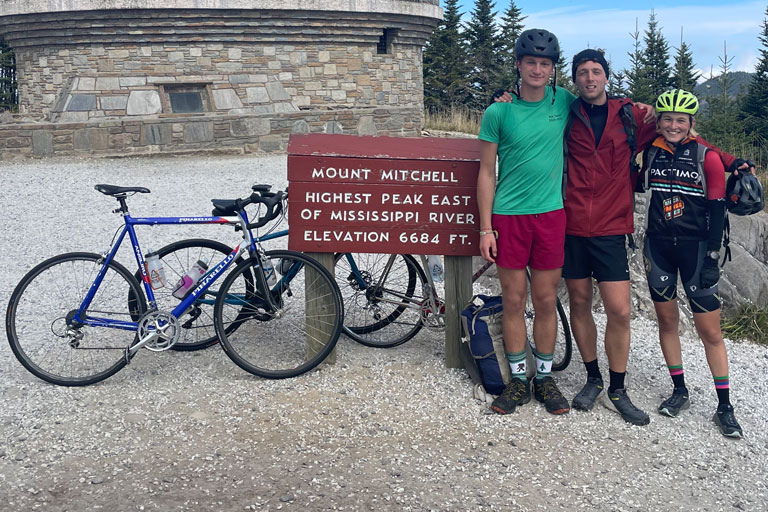 One musician’s path to UNCSA

UNCSA was on Anderson’s list when looking at music programs because his high school cello teacher earned a doctorate with UNCSA cello professor Brooks Whitehouse. His audition experience cemented his decision to attend.

“I had by far the best experience here,” Anderson recalls. “I felt really welcomed by a lot of students, and Brooks is just really a wonderful professor. It would have been hard for me to go anywhere else.”

To Whitehouse, Anderson was a perfect fit for the unique UNCSA environment.

Jake came to UNCSA as a fairly sophisticated musician already. All he needed to do was hone his craft to perform at the level of that sophistication. I have seen him do that in remarkable ways here.

“Jake came to UNCSA as a fairly sophisticated musician already,” Whitehouse said. “All he needed to do was hone his craft to perform at the level of that sophistication. I have seen him do that in remarkable ways here. Through his participation in the symphony orchestra, role in leading the ‘Nutcracker’ orchestra and involvement in chamber music, Jake has brought his cello game to a new level.” 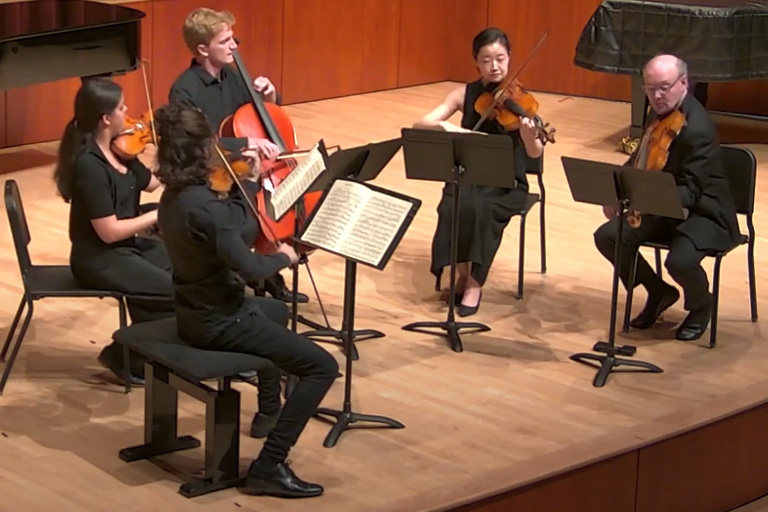 Opportunities to grow musically and as a person at UNCSA

Anderson said performing twice in UNCSA Chamber Music festivals is a highlight of his artistic experience. He was part of a quintet that performed the Piano Quintet in F minor by Cezar Franck, which he learned primarily through self-study.

“It’s like this tremendous piece of music that I really wanted to sound good,” he said. “I was playing with professors I’ve been watching, listening to and admiring for the last four years. Now I’m sort of collaborating with them. It was a great opportunity!”

Playing in the annual production of “The Nutcracker” is something that Anderson looks forward to every year.

“The audience for ‘The Nutcracker’ is very different from the proper classical music concert,” Anderson says. “People are cheering and laughing, and you are down in the pit every night with all of your friends. It’s really fun.” 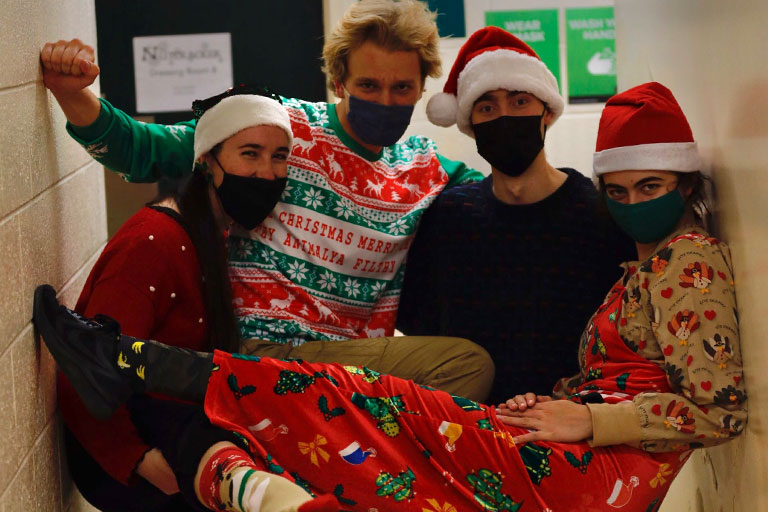 Campus Night at "The Nutcracker" means the orchestra dons its favorite holiday attire.

Outside of his personal studies, Anderson also served as a teaching assistant for Music History Professor Michael Dodds, who teaches a class covering 400 years of music.

“He talks about the story of the pieces and really brings music to life in that way,” Anderson says. “It’s not just some notes on a page, there is a life behind them. His class was so good I just wanted to experience it again. I think being a TA was really impactful on my education.”

In addition, Anderson served as a resident assistant for two years, which allowed him to meet non-music students. He said he enjoyed seeing them during performances: working backstage or in a spotlight during a dance performance. And, if one didn’t think that was enough campus involvement, he was also the virtual tour guide for the newest residence hall, Artist Village.

“I believe that Jake has professorial promise,” Whitehouse said. “He delivers some of the most insightful and cogent verbal program notes from the stage of any student I've ever had.”

The dream in life would be to do everything I love: music, biking, kayaking, without needing to sacrifice any of them.

Anderson said he won’t immediately be going into graduate school for music. Growing up on the Payette River in Idaho, he wants to explore being a professional whitewater kayaker or a pro cyclist.

“The dream in life,” Anderson said, “would be to do everything I love: music, biking, kayaking, without needing to sacrifice any of them.”

Get to know Jake Anderson

About the Presser Scholarship

Funded by a Presser Foundation grant, the annual Presser Award recipient is one who has grown individually and who has contributed earnestly to the success of the School of Music. The scholarship is $4,000.