Acclaimed lighting designer Clifton Taylor, who recently joined the UNCSA faculty, has won a prestigious Knight of Illumination Award in the United Kingdom (KOI-UK). An associate professor of lighting design in the School of Design and Production (D&P), Taylor won for his design of “Four Quartets,” based on the poem by T.S. Eliot, which was remounted at the Barbican Theatre in London.

KOI Awards were first presented in the U.K. in 2007 and are the most sought-after awards celebrating lighting, projection and digital content for television, theater, concert touring and events. In 2018, a sister organization in the United States presented its inaugural awards to two alumni of UNCSA’s lighting design program, Al Crawford and Joe Levasseur. Crawford, who serves on the UNCSA Board of Trustees, joins Taylor on the faculty this year. Both Taylor and Crawford attended the awards ceremony in London on Sept. 15. 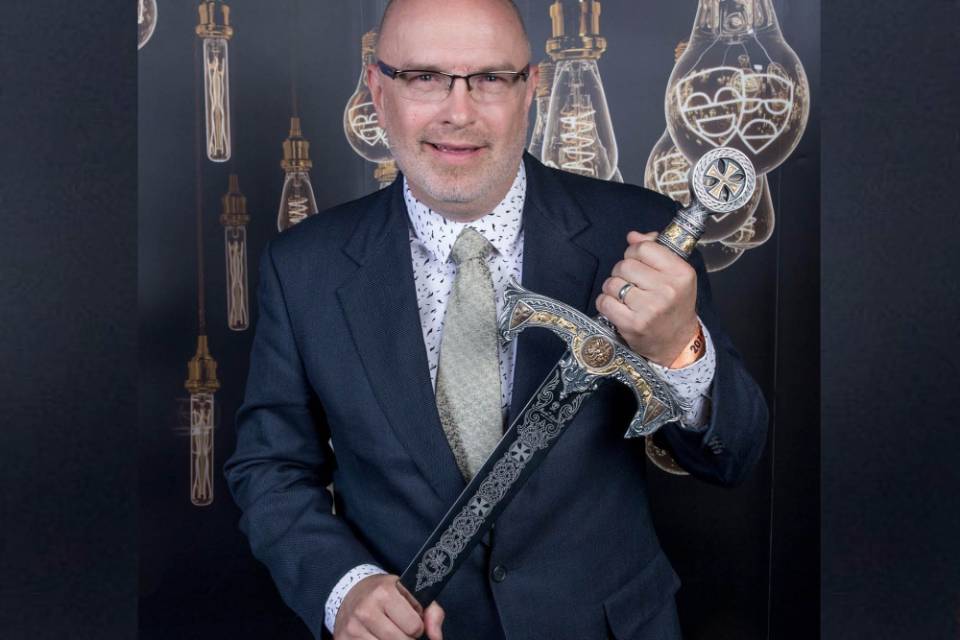 Clifton Taylor received a Knight of Illumination Award for his work in the United Kingdom.

“Both in the U.K and in the U.S., the Knights of Illumination are selected by industry experts,” said Dean of D&P Michael J. Kelley, who is an alumnus of UNCSA’s scene design program. “I can’t think of a greater honor than to be recognized by your peers. We are thrilled for Clifton, and we’re very proud to have him on our faculty. Students in our lighting program will be mentored by some of the industry’s most respected artists, with professional contacts that will help strengthen our network.”

Taylor designed both lighting and scenery for the critically acclaimed London production of “Four Quartets,” which was conceived and choreographed by Pam Tanowitz, the first time her work has been staged outside the United States. The scenic images are based on paintings by the master minimalist painter Brice Marden.

British newspaper The Guardian wrote that Marden’s “sweeping abstracts of colour and line define the space and set the mood of each of the interlinked poems,” and added “Clifton Taylor’s lighting and set design turns them into tangible objects, carving the stage into a realm of planes and recesses.”

Students in our lighting program will be mentored by some of the industry’s most respected artists, with professional contacts that will help strengthen our network.

In a career of more than 32 years, Taylor has created lighting, projection and scenic designs for theater, dance and opera companies around the world. He has also designed a number of unique concert music events for major orchestras, solo musicians and large-scale venues. His work has been commissioned on Broadway, off-Broadway, regionally, and in 17 countries outside the United States.

He has designed lighting for the repertories of Paul Taylor Dance Company, Alvin Ailey American Dance Theater, Martha Graham Dance Company, the Dance Theater of Harlem and Sardono Dance Theater of Indonesia, and for numerous ballet works for American Ballet Theatre, Scottish National Ballet, Ballet Jazz de Montreal, the Ningbo Song and Dance Company in China, Ballet de Nancy in France and companies in Boston, Washington, San Francisco, Russia, Brazil and the United Kingdom. He has had long association with contemporary dance companies including  Armitage Gone! Dance, Ron K. Brown/Evidence, Philadanco, Lar Lubovitch, Larry Keigwin, Elisa Monte, Buglisi Dance Theater & Maria Benitez Teatro Flamenco. His work has appeared at the Joyce in almost every season since 1992 and at New York City Center regularly since 1995. He has been the lighting director for New York’s Fall for Dance Festival since 2004 and the New York Flamenco Festival since 2002. He has designed for the Juilliard School Department of Dance since 1995.

Broadway credits include “Frozen,” “Jay Johnson: The Two and Only” and “Hot Feet.” Off-Broadway credits include productions for City Center Encores, a number of commercial plays and musicals, and works for the Irish Repertory Theater, MCC, Red Bull, and others in New York. His work has been commissioned for regional productions throughout the U.S. including a substantial body of work for both the Alley Theater in Houston and Dallas Theater Center. He has designed for plays in London’s West End and in Shanghai, China at Theater Above.

In the world of opera and classical music, Taylor’s work has been commissioned by the Haydn Orchestra in Italy, the New York Philharmonic, the National Symphony Orchestra, New York City Opera (National Company), Gotham Chamber Opera, Opera de Lorraine in France, the Tanglewood Music Center Opera Program, the Asia Society, the Boston Pops Orchestra, the Yokohama Noh Theater and the Japan Society, The Juilliard School Opera Division and by many solo artists performing at Carnegie Hall, Merkin Hall, The Kennedy Center and other major venues. In 2016 he was invited to curate and design “A Concert of Light and Shadow” as an orchestra event with an immersive design component at Teatro del Lago in southern Chile. In addition, Taylor has been the principal theater consultant on two recent, large-scale theatrical venues.

He is a sought-after teacher and lecturer on theatrical lighting especially in the area of color and light, regularly speaking at New York University (NYU) and at Lighting Design International, the annual lighting convention. He also regularly speaks at other universities, theater companies and professional conferences in the U.S. and abroad. In 2002 and 2003 he was awarded grants from the Asian Cultural Council to develop and teach courses in lighting design in Cambodia and Indonesia, two countries where he has had extensive professional relationships and interests. He presented at New York’s Broadway Lighting Master Class for 17 years from 1997 - 2014 and is a former member of The Juilliard School’s Dance faculty.

Taylor has a B.F.A. in design from NYU’s Tisch School of the Arts.