The Rev. Eric S.C. Manning being interviewed by Director Nathan Knox during the filming of "No Sanctuary." / Photos courtesy of Emmilee Millhouse

The film, “No Sanctuary,” produced by Moriah Hall and Emmilee Millhouse and directed by Nathan Knox, explores human nature and behavior through the personal lens of those who have been affected by gun violence in America, in particular those affected by the 2015 shooting at the historic Emanuel African Methodist Episcopal Church in Charleston, South Carolina. 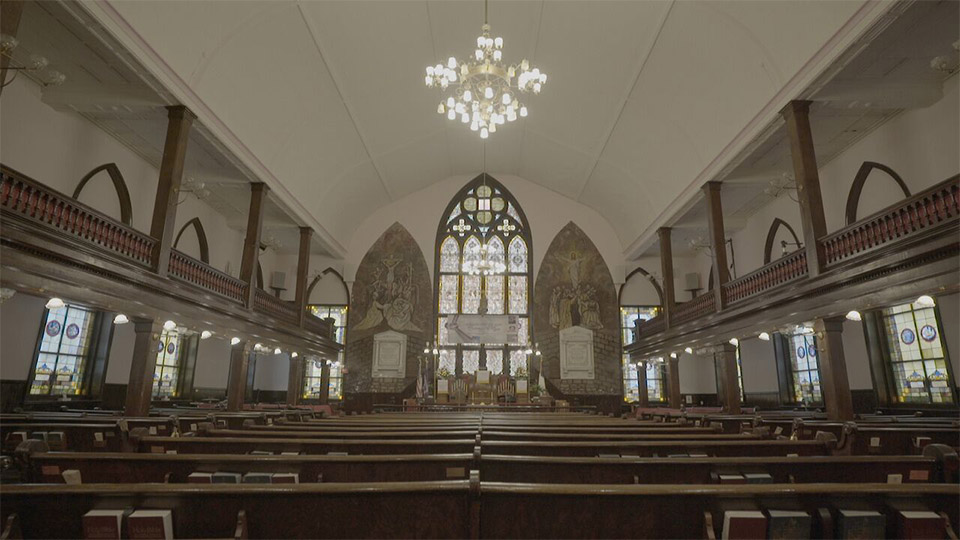 Trailer for "No Sanctuary."

A story that needed to be told

The idea for the documentary grew organically from conversations between Hall and her faculty mentor, Lauren Vilchik. Hall’s father coached a basketball team in Charlotte; one of the players had been orphaned by the shooting.

“She and her four sisters had moved to Charlotte to start over and live with their aunt,” Hall says. “I was completely and utterly struck by how similar their lives were to mine, and I could not imagine a reality in which I had to find a way to provide for my four sisters the way that the oldest daughter of the affected family had to.” 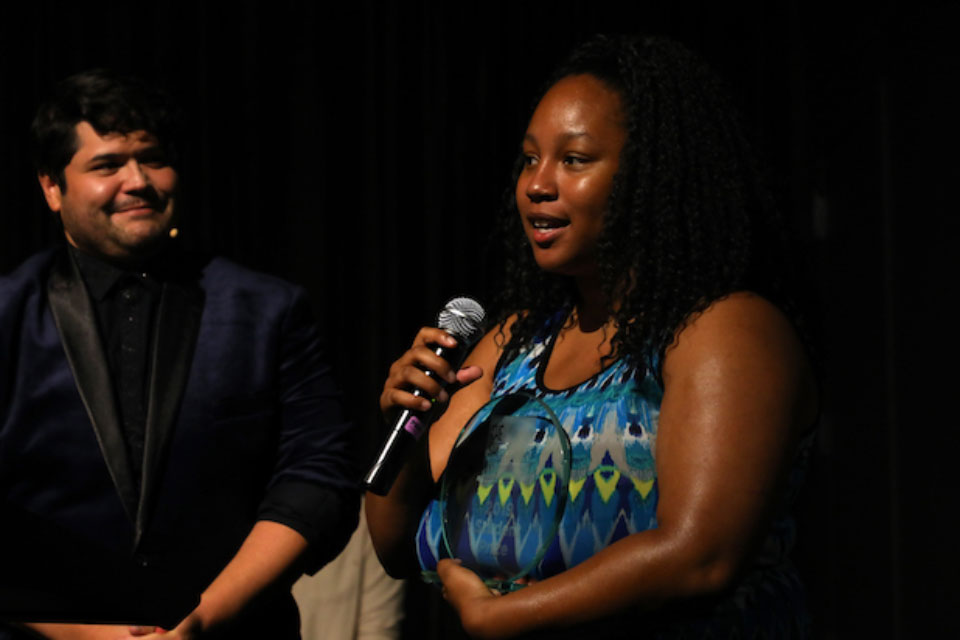 Hall accepting an award from TheWrap’s 2019 ShortList Film Festival, where "No Sanctuary" won in the best student film category.

Vilchik talked regularly with Hall about many different projects and ideas, beyond just those associated with her work for the school. As Hall told her about her personal connection with the orphans of Emmanuel AME, Vilchik realized that “the more we talked, the more important it became to tell this story.”

She encouraged Hall to pitch the idea for her senior thesis, even though it was outside the typical narrative realm of fourth-year films. “The fear of not having it approved shouldn’t stop you from trying,” Vilchik says.

When the pitch was approved, Hall was tasked with finding others to join the documentary filmmaking team, connecting with Millhouse as producer and Knox to direct.

From there, the film took off in unexpected ways, putting the filmmakers almost immediately into new territory—for them, and for the School of Filmmaking.

Being the first team to work within the documentary filmmaking realm for their fourth-year film meant the filmmakers and their faculty mentors had to establish new precedents and processes outside of those already in place for the creation of narrative, script-based films.

Less than a month after Hall’s pitch, the team found out that the Charleston shooter’s trial date was the following week. It was the first of many trips to film in South Carolina. “This happened before the fourth-year projects even started,” Millhouse says. “It was something so immediate and relevant, we had to go. We only had a week to plan the trip.”

The School of Filmmaking typically restricts filming to a radius around the Winston-Salem area. “There was a lot of collaboration and trust between us, our faculty and our dean,” Millhouse says, “to make that kind of exception.”

Because a documentary had never been made at the school before as a fourth-year thesis, the framework for producing the film just didn’t exist. We ended up being given a lot of trust.

Moriah Hall, Producer of "No Sanctuary"

“Because a documentary had never been made at the school before as a fourth-year thesis,” Hall says, “the framework for producing the film just didn’t exist. We ended up being given a lot of trust by our faculty to make decisions about what we needed in regards to deadlines, equipment and how we delivered cuts.”

They may not have been trained in the specifics, but despite the new ground, Vilchik was always confident the filmmakers had the tools they needed to pull off the documentary.

For example, when the team decided to travel to Washington, D.C. to film the March For Our Lives demonstration, she knew they could handle it. “The process and preparation they learn in the School of Filmmaking gave them the comfort to know how to just ‘wing it,’” she says. “They knew how to work the cameras and a crowd, how to negotiate, how to not take ‘no’ for an answer.” 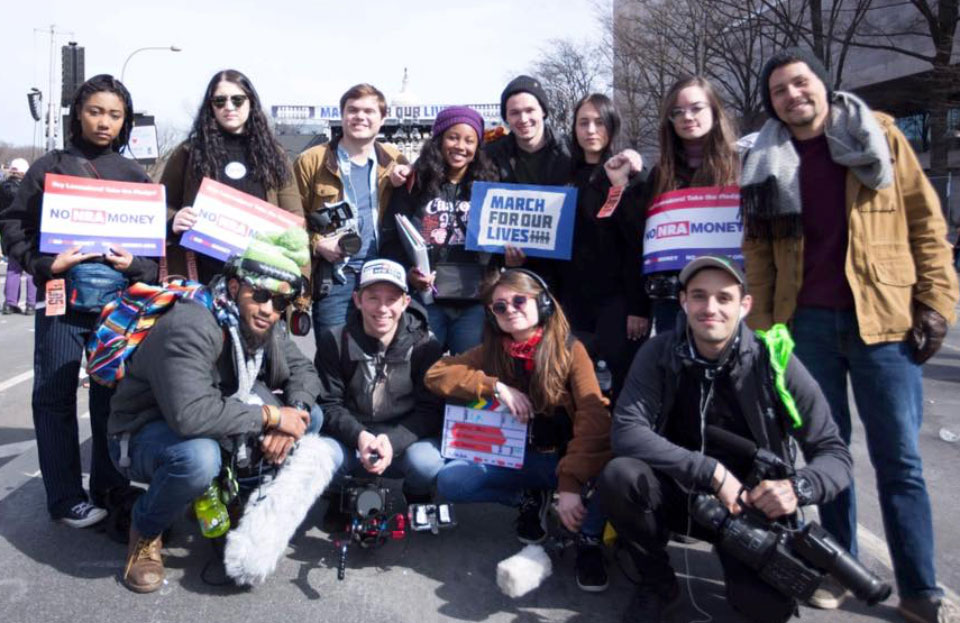 The "No Sanctuary" crew at the March For Our Lives demonstration in Washington, D.C.

The differences in the process were immediately apparent and provided the team with some valuable and challenging experiences.

“As a crew, we were incredibly aware of the fact that every time we would interview someone, we were asking them to relive the worst day of their lives,” Hall adds. “So we decided that rather than us trying to tell the story we wanted, we would let our interview subjects share what they wanted to share and craft the story based on what we were told.”

They also researched and talked with psychologists to understand grief and tragedy. “It was imperative that we talked to people who knew more than us on the subject as to not be insensitive to the people who were graciously sharing their lives with us,” Hall says.

Knox elaborates. “Flexibility was critical,” he says of their filmmaking process. “Traditional narrative filmmaking tends to be a bit rigid and regimented, in respect to both timeline and concept. Conversely, we were discovering what ‘No Sanctuary’ was until the moment we turned it over.”

Our project mentors were very supportive of this explorative process ... they were there when we needed guidance and support, and they were hands-off when we needed freedom to explore and discover.

Nathan Knox, Director of "No Sanctuary"

Fortunately, the School of Filmmaking provided both the structure and the space needed for that process. “Our project mentors were very supportive of this explorative process,” Knox says. “In a word, they were there when we needed guidance and support, and they were hands-off when we needed freedom to explore and discover. This dynamic made creating ‘No Sanctuary’ the most educational experience I've ever had, and I hope more students have similar opportunities with their films—documentary and narrative, alike.”

Although “No Sanctuary” premiered in 2018 and much of its crew are now alumni, their work for the project is ongoing. “Your job doesn’t end with the film,” Millhouse says, “or even at graduation.”

“No Sanctuary” has screened at the AFI/Meet the Press Film Festival, the Nashville Film Festival, Real to Reel Film Festival, RiverRun International Film Festival and others in 2018 and 2019. It won the student film category in the TheWrap’s 2019 ShortList Film Festival, among other festival awards. The filmmakers continue to attend these events to discuss and promote the film. 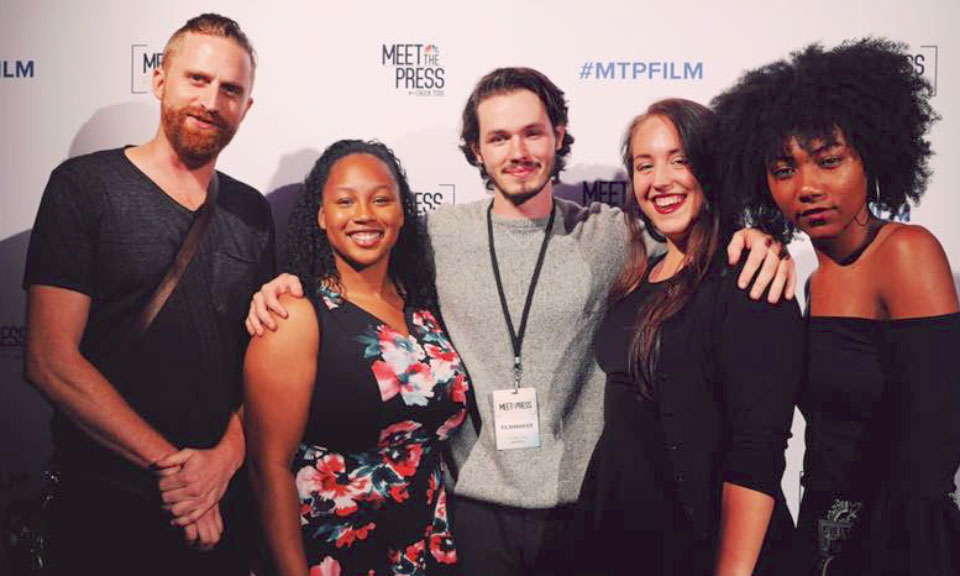 Filmmakers from the "No Sanctuary" crew at the AFI/Meet The Press Film Festival. From left: Caleb Gardner, Moriah Hall, Nathan Knox, Emmilee Millhouse and Jo Hatcher.

And the project’s impact has extended into the filmmakers’ personal and professional lives, as well as created new precedents within the School of Filmmaking.

“My personal belief is that there are already so many wonderful stories out there just waiting to be told, that I don’t need to write new ones,” says Hall, who works exclusively in non-narrative television. Knox leads a production company, New Horizon, that helps nonprofit and research organizations share their work and stories through film.

Vilchik sees the broader effects the “No Sanctuary” team’s work has had—a team of fourth-year filmmakers in the School of Filmmaking is currently working on a documentary about transgender identity and culture.

“The students are teachers all the time,” she says. “I learn from them daily. And, if you listen, they are telling you what they need. This project started because of their passion. My work is to help them to be the filmmakers they want to be.”

Create films you're passionate about.