UNCSA documentary will screen at AFI/Meet the Press Film Festival

A documentary short created as a 2018 senior thesis film by students in the School of Filmmaking at University of North Carolina School of the Arts has been selected for the second annual American Film Institute/Meet the Press Film Festival, screening alongside documentary shorts from HBO, Netflix and The New York Times.

“No Sanctuary,” directed by Nathan Knox, is one of 23 films —the only one created by students—that spotlight critical issues in the national midterm elections in November. For the festival on Oct. 7 and 8, the films will be grouped into programs that explore issues including veterans and service, climate, voting rights, gun rights and gun control, religion, immigration, and poverty and rebuilding. Each program will include a question-and-answer session with filmmakers, moderated by an NBC news reporter.

“No Sanctuary” is part of the festival’s gun debate program of films, hosted by NBC Capitol Hill correspondent Kasie Hunt. 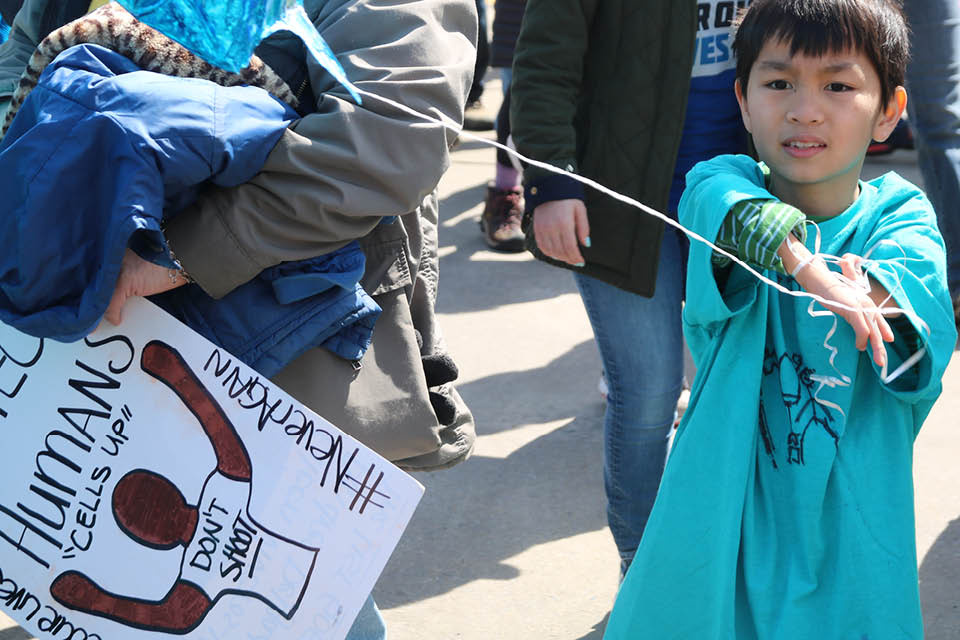 Watch the trailer for "No Sanctuary," a documentary directed by Nathan Knox. It is the only student film selected for the American Film Institute/Meet the Press Film Festival.

The film explores human nature and behavior through the personal lens of those who have been affected by America's indifference to gun violence. Through a collection of interviews, trial footage, home videos and personal testimonies, “No Sanctuary” examines the lives of family members of the “Emanuel 9,” victims of the massacre at Emanuel African Methodist Episcopal Church in Charleston, S.C, on June 17, 2015. Dylan Roof was convicted in December 2017 and sentenced to nine life sentences in the mass shooting.

The film was produced by Moriah Hall and Emmilee Millhouse, with cinematography by Vishal Parmar, editing by Jay Batchler with music by Caleb Gardner. All of the filmmakers are 2018 graduates of the Film School.

Susan Ruskin, Dean of the School of Filmmaking, said students who created “No Sanctuary” are stepping into one of the industry’s hottest trends.

Documentary shorts are emerging as a very popular platform for both viewers and filmmakers. They offer a deeper dive into contemporary issues than traditional news programs can provide, without the time and resource commitment of a full-length documentary.

“Documentary shorts are emerging as a very popular platform for both viewers and filmmakers,” she said. “They offer a deeper dive into contemporary issues than traditional news programs can provide, without the time and resource commitment of a full-length documentary. That is very important in the new media landscape, which demands new and compelling content all day, every day.”

Ruskin said it is a coup for a student film to screen alongside the work of veteran filmmakers. “Though it is only in its second year, the American Film Institute/Meet the Press Film Festival has established a prestigious platform for documentary short films,” she said. “Nathan and his team have gotten the attention of professionals in the industry, which is very significant for new graduates.”

In its inaugural year, the festival screened 16 films, three of which went on to be nominated for Academy Awards.

Beginning Oct. 8, select films from the festival will be available for a month-long showcase on NBC News Digital platforms and apps, including AppleTV, Roku and Amazon Fire, as well other on-demand services such as Hulu, AOL and Comcast X1.

Celebrating its 25th anniversary this year, the UNCSA School of Filmmaking has been ranked among the best in the country by Variety, The Hollywood Reporter, MovieMaker magazine and The Wrap. It offers undergraduate concentrations in animation, cinematography, directing, picture editing and sound design, producing, production design and visual effects, and screenwriting, as well as M.F.A. programs in creative producing, film music composition and screenwriting. A pioneer in virtual reality and augmented reality storytelling, the School of Filmmaking has been chosen by industry giant Oculus as a NextGen School. The school is an official partner of the Sundance Institute.