Production of the U.S. Department of Interior's radio play "My Dear Mr. President," broadcast on Jan. 8, 1939. / Photo: Library of Congress

In the 1930s and 40s, radio was the apex of communication and entertainment. Listeners could tune in for the latest news broadcasts and popular music, hear directly from their leaders and immerse themselves for a while in fictional series and plays performed over the airwaves.

In some essential ways, radio hasn't changed all that much. It is still, at its heart, a version of the most primitive form of storytelling — spoken words — requiring listener participation and an active imagination. In the age of social distancing, it has become both a familiar and reinvented art form, one that the Schools of Drama and Design & Production at UNCSA are exploring with the upcoming production of Shakespeare's "Henry V," premiering Nov. 12.

The technology for radio as we think of it today was in development by the end of the 19th century. Broadcasts were occurring in the early 1900s, with global events like the first World War precipitating and increasing the demand for more immediate news and information through the 1920s.

Radio entered its "Golden Age" in the 1930s and 40s with programming like President Franklin D. Roosevelt's fireside chats and regular series like "The Roy Rogers Show" and "Abbott and Costello," many of which went on to become television shows and still have name recognition to audiences nearly nine decades later. 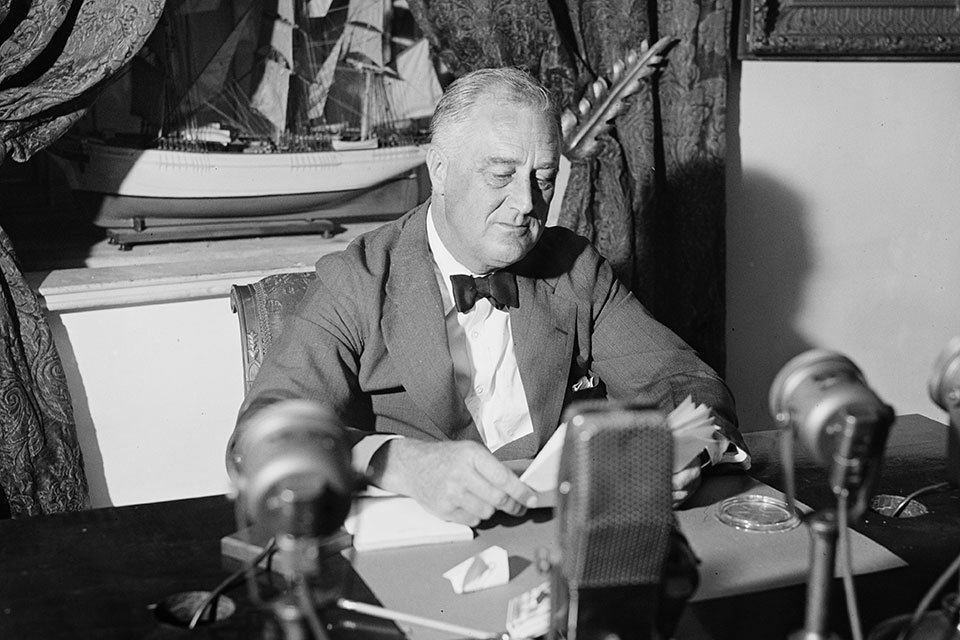 President Franklin D. Roosevelt during a broadcast of his famous "fireside chats" in September 1936. / Photo: Library of Congress

According to Smithsonian Magazine, in the United States during World War II (1939-45), "nine in ten families owned a radio, and they listened to an average of three to four hours of programming a day, using it as their main source of news."

Some of the most popular programming during that time was the radio play. Many plays were classic theatre works adapted for radio (much like "Henry V"), while others were novels and short stories turned into radio drama. Plenty of original plays were written specifically for radio, too.

While the popularity of the form faded with the advent of television in the 1950s and 60s, radio drama has never entirely gone away. The BBC still regularly produces and airs radio plays on BBC Radio 4. NPR has had a number of radio play series, including Earplay and NPR Playhouse, which ran from the 1980s until 2002 and produced a successful radio play version of the original Star Wars trilogy. Some local public radio stations still air both old and new radio plays.

Most recently, there's the overwhelming success of the podcast industry. Although much of that industry is nonfiction and talk radio, the focus remains the same: good storytelling.

For Jason Romney, Director of the Sound Design department in the School of Design & Production, and the sound designers working on "Henry V," the process has been quite the departure from the radio plays of the 30s and 40s, in some part due to social distancing measures.

Traditionally, radio dramas were recorded live, with the entire cast and sound effects crew gathered together in a studio, performing the piece for listeners in real time. "Our actors were never in the same room at any time," Romney says. "We gave them all recording devices and they recorded themselves individually while sitting together on a Zoom call."

The work of the team has been multi-layered — two designers working on combining all of the voice recordings, one selecting and composing music for the play ("There's very little of the play without musical underscore," Romney says) and one working on adding sound effects from the department's extensive library of commercially purchased, donated and created in-house sound effects.

"It's a play about war," Romney says, "so the actors talk and they fight. We're creating the sounds of the battle."

Even scenes without the dramatic action of a battlefield require thoughtful background and environmental sounds. For example, in one scene Henry meets with his advisors to receive messages in his chambers. "We had to think about the room they're in. What's the acoustic signature of where they are? And we have to create the sounds of that room."

With all of these sounds, the play becomes this rich thing of not just the actors' words, but the environment, the music, the sound effects of all of the action taking place.

"With all of these sounds, the play becomes this rich thing of not just the actors' words, but the environment, the music, the sound effects of all of the action taking place," Romney says.

Creating that multi-layered experience is quite the undertaking for a two- to three-hour Shakespeare drama. Romney estimates that by the time the final recording is completed, each of the designers will have spent at least 240 hours on the production, nearly 1,000 hours total.

A time for focus and imagination

When the School of Drama began planning for and reimagining the 2020-21 performance season, voice and text faculty member Sara Becker knew a radio play had to be in the line-up.

She emailed Dean Scott Zigler in the spring with her idea. "I told him that I really hoped we could explore some audio work. It's time to really shine and get good at these skills," Becker says. "We are a very visual culture now. This is a way to go back and put words and language first."

Inspired in part by The Public's radio production of "Richard II," which aired on WNYC earlier this year and is available to stream, the idea got the green light.

Thinking about which Shakespeare work to perform, Becker says, "It had to be 'Henry V.' Built into the chorus is this idea of, 'I don't know if we can do this. To do this, you have to participate.' There's that increased call for participation that fits here."

The theme of leadership, she says, is also incredibly relevant. "'Henry V' asks, 'What does it mean to be an inclusive leader? It's a play about uniting England, but it also speaks to our ideas about democracy."

The play allows listeners to approach current events with some historical distance and perspective. "There's something about knowing that writers a long time ago were tackling and thinking about these same issues," she says, that allows the audience to both confront those issues and hold them at arm's length.

Radio is just storytelling. This is just a campfire story. It's being read to at night by your parents ... it's something we crave.

And, she says, it's just a good story. "Radio is just storytelling. This is just a campfire story. It's being read to at night by your parents." Podcasts, with their recent surge, and even radio itself may feel relatively new, Becker says, "but it's something we crave. It's very, very old."

"'Henry V' is a good, rich, complex story," she says. "It asks us to pay attention, to focus and participate." The best way to enjoy that story is to really listen. Settle into a favorite chair or take a long walk, and listen to (and participate in) "Henry V" when it hits the digital airwaves in November.